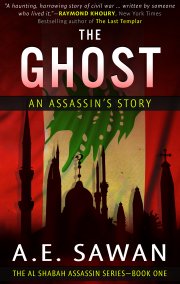 THE GHOST: An Assassin’s Story, is based on the true story of the author’s experiences growing up in Lebanon during that country’s bloody civil war, as well as his time as a counter-terrorist operative. The story follows “Paul” from his childhood in the Bekaa Valley to adulthood when he is recruited and trained as a killer by both Israel’s Mossad and the CIA.

A tale of obsession and revenge, in this first book of the Al Shabah Assassin Series, Paul ultimately finds himself on the trail of a childhood nemesis who had become the feared charismatic leader of a violent jihadist group. This fast-paced thriller takes Paul around the world in his personal search for truth and justice, and a final showdown with a yellow-eyed terrorist who one violent day ended Paul’s childhood and set him on the road to becoming an assassin.

“A haunting, harrowing story of civil war … written by someone who lived it.” – Raymond Khoury, New York Times bestselling author of The Last Templar

I’ve become the kind of man I hate. Without knowing why, perhaps just the scent of death that surrounds me, women pull their young ones closer to them when I walk by. Nobody sits beside me on a crowded bus, or asks to share my table in a busy food court. In fact, I am the kind of man people would spit on behind his back. Out of fear. Out of loathing. They don’t actually do it, but I feel and sense it. And I understand. 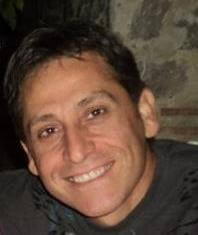 You see, I kill bad people. I am a freelancer, an independent assassin. I did not choose to be a killer. It just happened. But I don’t work for any government or agency. I pick my targets and only take on the assignment after careful consideration.

I am selective. I don’t kill rapists, serial killers, gangsters, or politicians, even if they deserve it. I don’t even murder lawyers. Maybe I should kill a few, but I don’t. I only kill terrorists, and I never play politics. If you are thinking that is too small of a niche market, and that business is slow, you will be wrong.

Who am I? That is a good question.

My given name is Paul. I was born in a small town in the Bekaa Valley of Lebanon. The son of a mechanic, a real mechanic, unlike me. But that is about all I can tell you. And it was many years ago, a different life than the one that was thrust upon me when I was just ten.

Now I go by many names. Whatever suits my purpose at the moment. But those I hunt call me by an Arabic name Al Shabah. The ghost.

THE GHOST is a work of fiction, not a memoir per se, but my characters are based on composites of real people, and the major events described in these pages are historically accurate. I should know, because I lived them. 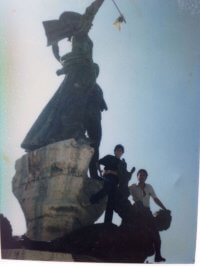 This picture has a story, it was taken In no man’s land down town Beirut in the middle of the war, at sniper alley . My bro Simon and I decided it will be cool to take a picture with the most famous icon in Lebanon . Remember no human has been near it in over 10 years. So we took an ambulance and went there as paramedics , why we did this ? It’s because we could . An ordinary day for teenagers in East Beirut .

Accolades for THE GHOST:

“A haunting, harrowing story of civil war, a gut-wrenching account of how neighbour can turn on neighbour and how easily and brutally lives can be devastated, written by someone who actually lived it.” – Raymond Khoury, New York Times bestselling author of The Last Templar

“This is a book that gets under your skin, into your head, and won’t let go.” – Susanna J. Sturgis. Editor, Writer.

“Sawan’s real-life novel allows us to see with ironic humanity into a violent world that too few people really understand.” – Patricia Keeney, novelist and poet

“I was curious to read Al Shabah, I wanted to know how close it is to the truth. The novel details the truth itself. But the descriptions are not normal, I felt like looking through camera movements that detailed and reflected the confrontation between Paul and Bassam, or the clash of cultures between terrorism and murder on the one hand, and the struggle for existence on the other.” – Georges Hayek, Journalist, Author.

Is there a sociopathic killer on the loose and murdering prostitutes in New York City?  NYPD’s top cop, Homicide Commander Lieutenant John Driscoll, believes there is.  Someone who calls himself “Tilden” and claims to have been sexually … END_OF_DOCUMENT_TOKEN_TO_BE_REPLACED

In an experiment to discover what secrets are hidden within the infinite vastness of the galaxy, scientists create a machine so powerful that it rips a hole through space and time. But instead of revealing the dark world of their own universe the … END_OF_DOCUMENT_TOKEN_TO_BE_REPLACED

What would a mad mullah actually do with a weapon of mass destruction? Simple. He would use it.   Derek Martell is in a dead end career, manning a fuel point in Eastern Iraq. It’s a far fall from a life of fortune and glory, but he’s … END_OF_DOCUMENT_TOKEN_TO_BE_REPLACED

In the backcountry of Idaho, a tribe of men are hunting and killing with a dream of returning the world to an earlier time. A time when courage and prowess in the field determined a man’s worth. A time when the strong took what they wanted, and … END_OF_DOCUMENT_TOKEN_TO_BE_REPLACED

On an Icelandic Island, an illegal experiment intended to create the perfect biological weapon has transformed a once-innocent creature into the biblical Leviathan that once terrorized the world. Able to shatter steel and granite as easily as it can … END_OF_DOCUMENT_TOKEN_TO_BE_REPLACED

Pilot Jake Silver is haunted by a cruel irony—he secretly suspects that he’s the reason Swede Bergstrom, the hero who saved his life, has fallen on hard times. Upon learning that Swede has been killed during the commission of a crime, the … END_OF_DOCUMENT_TOKEN_TO_BE_REPLACED

Desperate to move his stalled agenda, the liberal US president agrees to a summit with top congressional conservatives in a swank resort retreat in northern New Mexico. But the confab quickly morphs into a national crisis when the president is … END_OF_DOCUMENT_TOKEN_TO_BE_REPLACED

Janzen Robinson is no longer a man torn between two worlds, having decided to come off the bench and dive head first into Cleveland’s magical underworld. With his new partner and perpetually exhausted friend Grove, he’s just starting to get a handle … END_OF_DOCUMENT_TOKEN_TO_BE_REPLACED

"All I ever wanted was to love women, and in turn to be loved by them back. Their behavior towards me has only earned my hatred, and rightfully so! I am the true victim in all of this. I am the good guy. Humanity struck at me first by condemning me … END_OF_DOCUMENT_TOKEN_TO_BE_REPLACED

Having abstained from killing for almost a year, the Highwayman is coming unglued. Unsure if the FBI is watching, Lance Belanger spends his days and nights in a paranoid malaise, longing to kill again. Meanwhile, in Bucharest, Romania, an … END_OF_DOCUMENT_TOKEN_TO_BE_REPLACED

Maybe the youngest son of a violent criminal named Hoggy Thompson was born a beast. Maybe rage was beaten into him. One thing was certain, by the time he reached manhood, Jerry Thompson was a savage killer. He had no conscience about rape, child … END_OF_DOCUMENT_TOKEN_TO_BE_REPLACED

Marty Croft has it all. A beautiful wife, and a successful career as a commercial artist. That is until his past comes back to haunt him. Enter Gordon Shamus, the psychotic son of Marty’s former gangster boss. After Marty’s wife is kidnapped, he … END_OF_DOCUMENT_TOKEN_TO_BE_REPLACED

Is there a sociopathic killer on the loose and murdering prostitutes in New York City?  NYPD’s top cop, Homicide Commander Lieutenant John Driscoll, believes there is.  Someone who calls himself “Tilden” and claims to have been sexually … END_OF_DOCUMENT_TOKEN_TO_BE_REPLACED

The World Encyclopedia of Serial Killers is the most comprehensive set of its kind in the history of true crime publishing. Written and compiled by Susan Hall, the four-volume set has more than 1600 entries of male and female serial killers from … END_OF_DOCUMENT_TOKEN_TO_BE_REPLACED

Terrifying things are happening to Kay Weden, a forty-something single mom and high school teacher in Salisbury, North Carolina. Despite having no known enemies, Kay’s home, car, and peace of mind are under attack throughout 1993. Most chilling … END_OF_DOCUMENT_TOKEN_TO_BE_REPLACED