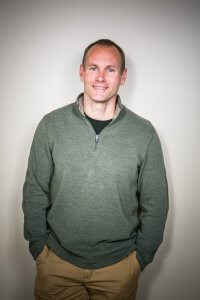 Greetings from Seattle! I’m an author who spent much of the last three decades traveling and working throughout Africa, Asia, Latin America and both Polar regions. Initially I traveled as a dirt poor thrill seeker, then later as an expedition leader for an ecotourism company. These days my work as a coffee buyer for my importing business satisfies my urge to wander. At this point I’ve visited more than seventy countries, and my travels have inspired a lot of my writing. In fact, my first paid writing gig came as an expedition leader when, due to an unfortunate amount of experience with the issue, I wrote the company manual on how to clear a cadaver through customs in a foreign port. It wasn’t exactly True Crime writing, but it was definitely dark stuff.

My next writing gig was on the lighter side, writing screenplays in Los Angeles. During my screenwriting days I also worked as a professional standup comedian, which introduced me to a very particular kind of sadness. Much as I loved having drunk guys yell “You suck!” at me in small town bars, I finally left the comedy world so I could focus on writing books. 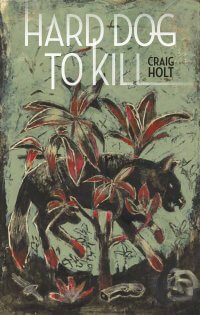 The result of my switch to novel writing is my new thriller Hard Dog to Kill (coming out in early November 2017) which tells the story of an American mercenary in the modern Congo who can only save his long time brother in arms by killing the only good man he knows. (For more about what inspired me to write Hard Dog to Kill, click here.)

Hard Dog to Kill was a finalist in both the Pacific Northwest Writers Association Literary contest, and the Rocky Mountain Gold Fiction contest.

I’m currently deep into my next book, Alvaro, which follows a Colombian drug lord who flees his collapsing empire under the mistaken impression he can reinvent himself in America. You can follow my travels and read my blogs about here.

When I’m not writing (which is something I do very, very early in the morning) I’m a voracious reader. I also run a coffee importing business focused on partnering with smallholder farmers around the world to improve the quality of their coffee and then finding markets for it. Basically, I get paid to travel to amazing places, work with fantastic people, and drink great coffee. It’s a very, very good gig. I also teach courses on coffee tasting, so I have to get my tongue re-certified every two years. 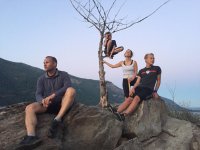 This is my family. We have the album cover, now we need to record an album.

I’ve always said I’d rather wear out than rot, so in my so-called down time I’m pretty active. You could also say I self-medicate through exercise. My wife says I have obsessive tendencies and a masochistic streak. The result is that I have a black belt in Tae Kwon Do, I’ve completed an Iron-distance triathlon, I’ve run several marathons (including the Boston Marathon) and I’m an Ultramarathoner. My longest trail run was 100 miles. I want you to know that it hurt. A lot. For a very long time.

I live in the Seattle area with my remarkable family, and enjoy the company of tremendous friends new and old. It’s been a great ride so far…

Some Cases You Solve. Some Cases You Survive. Naval Criminal Investigative Service Special Agent, Tyrone Benhoff is in purgatory. That’s what agents call it when they find themselves on the wrong side of command and are transferred to a place … END_OF_DOCUMENT_TOKEN_TO_BE_REPLACED

TRIBULATIONS is the anticipated and exciting sequel to HAPPENSTANCE, the SciFi/TechnoThriller novel that introduced Blake Thompson to the world. September 11, 2029. It’s been almost a year since Blake Thompson discovered an alien ship near … END_OF_DOCUMENT_TOKEN_TO_BE_REPLACED

"O'Callaghan is back with a vengeance ..." -- Gregg Olsen, #1 New York Times bestselling author Is there a sociopathic killer on the loose and murdering prostitutes in New York City?  NYPD’s top cop, Homicide Commander Lieutenant John … END_OF_DOCUMENT_TOKEN_TO_BE_REPLACED

Tourism in New York City is under siege.  Visitors to the Big Apple have become targets of vengeful twins hell bent on exacting punishment on total strangers to right the hellacious wrongs perpetrated against them in a hellhole they called … END_OF_DOCUMENT_TOKEN_TO_BE_REPLACED

A sociopathic killer is using the internet to lure seemingly random women to their gruesome deaths in New York City.  During his heinous murderous spree this madman is extracting the bones of his victims.  His sheer brutality has the … END_OF_DOCUMENT_TOKEN_TO_BE_REPLACED

In an experiment to discover what secrets are hidden within the infinite vastness of the galaxy, scientists create a machine so powerful that it rips a hole through space and time. But instead of revealing the dark world of their own universe the … END_OF_DOCUMENT_TOKEN_TO_BE_REPLACED

What would a mad mullah actually do with a weapon of mass destruction? Simple. He would use it.   Derek Martell is in a dead end career, manning a fuel point in Eastern Iraq. It’s a far fall from a life of fortune and glory, but he’s … END_OF_DOCUMENT_TOKEN_TO_BE_REPLACED

In the backcountry of Idaho, a tribe of men are hunting and killing with a dream of returning the world to an earlier time. A time when courage and prowess in the field determined a man’s worth. A time when the strong took what they wanted, and … END_OF_DOCUMENT_TOKEN_TO_BE_REPLACED

Some Cases You Solve. Some Cases You Survive. Naval Criminal Investigative Service Special Agent, Tyrone Benhoff is in purgatory. That’s what agents call it when they find themselves on the wrong side of command and are transferred to a place … END_OF_DOCUMENT_TOKEN_TO_BE_REPLACED

New from award-winning author Terry Persun! After the murder of his wife and unborn child, the only time freelance tech investigator Ten feels alive is when he cuts himself. For the last few years, he has taken freelance investigative jobs. Some of … END_OF_DOCUMENT_TOKEN_TO_BE_REPLACED

Coming January 29th to REELZChannel™! The DEADLY ASSOCIATES documentary! Step into Chicago during the 1960s and ‘70s, where mobsters influence everyone from strip-club owners to Teamsters, aldermen, judges, and local police. It is a world where … END_OF_DOCUMENT_TOKEN_TO_BE_REPLACED

"Lizzette Martinez’s story embodies the fire energy that gives light and life to survivors all around her! Survivors need to see strength and perseverance despite opposition, and Lizzette models just that." - Melissa Schuman, actress and singer In … END_OF_DOCUMENT_TOKEN_TO_BE_REPLACED

Soon To Be A Documentary Series! My name is Suzanne Buchanan. There is an active arrest warrant for me in Thailand for articles I published on "The Backpacker Murders" as the former owner and editor of the Samui Times. I am a British citizen and had … END_OF_DOCUMENT_TOKEN_TO_BE_REPLACED

In this true crime-flavored novel, Detective William Boyett is called out on Mardi Gras evening in Mobile, Alabama to investigate the discovery of a young woman’s body wrapped in a carpet in a vacant lot a few blocks from the parade route. Over … END_OF_DOCUMENT_TOKEN_TO_BE_REPLACED