To celebrate the holiday’s and thank our loyal readers, WildBlue Press has discounted the following True Crime, Mystery, and Suspense ebooks starting Dec. 26. So warm up those new Kindles (or get the Kindle Reading App for your other devices at wbp.bz/kindlereading) and dig that Amazon Gift Certificate out of your stockings! But hurry this deal won’t last long! 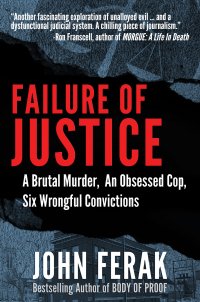 FAILURE OF JUSTICE by John Ferak

From the bestselling author of BODY OF PROOF and DIXIE’S LAST STAND, John Ferak, comes a book that is six times more explosive than “Making A Murderer!” FAILURE OF JUSTICE details the murder, investigation, trial, conviction and eventual exoneration–the largest such ever in the United States–of the Beatrice 6. For more than twenty-five years, the Beatrice 6 rotted in prison for a murder they did not commit. Don’t miss this “fascinating exploration of unalloyed evil … and a dysfunctional judicial system. A chilling piece of journalism.” (Ron Franscell, author of THE DARKEST NIGHT and MORGUE: A LIFE IN DEATH) 80 Reviews, 4.5 average star rating

Get FAILURE OF JUSTICE here! 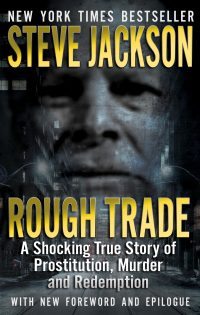 ROUGH TRADE: A Shocking True Story Of Prostitution, Murder And Redemption by New York Times bestselling author Steve Jackson is more than the recounting of a murder, an investigation, and the prosecution of a suspect. It’s also the story of two people from the seething criminal underworld of Denver, Colorado and how their paths crossed on the streets and in the courtroom. “Jackson writes with clarity and precision … He offers understanding. And in the world of true crime, what better goal can a book have?” (New York Times bestselling author Anthony Flacco) 45 Reviews, 4.7 average star rating 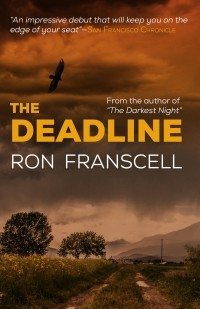 THE DEADLINE by Ron Franscell

From national bestselling author RonFranscell comes his first mystery. A dying convict’s last request thrusts small-town newspaperman Jefferson Morgan into a deadly maelstrom as he explores a fifty-year-old case of child murder — a wound his town still isn’t ready to scrape open. THE DEADLINE was followed by its sequel, THE OBITUARY. “Ron Franscell has undeniably hit his mark. His masterful storytelling strikes hard at the heart. It leaves his readers stunned one moment and tenderly moved the next. … a brilliant and engaging blend of fast-paced suspense, painstaking prose and characters so real they could drive down southbound I-25.” (Denver Post) 76 reviews, 4.7 average star rating 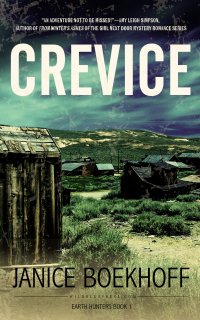 “An intriguing and modern tale around the legend of the Lost Dutchman Mine. This debut novel has adventure, romance, and an insightful spiritual thread that readers will enjoy.” (Marissa Shrock, author of The First Principle and The Liberation) CREVICE is Book One in newcomer Janice Boekhoff’s ‘Earth Hunters’ romantic suspense series. “Refreshingly original, Boekhoff’s treasure hunt of legends and intrigue will leave you tantalizingly infected with gold fever! An adventure not to be missed!” (Amy Leigh Simpson, author of the Girl Next Door Series) 23 reviews, 4.9 average star rating 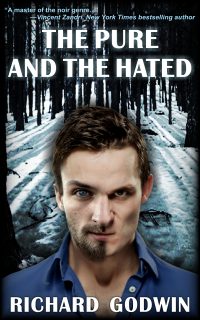 THE PURE AND THE HATED by Richard Godwin

From internationally acclaimed author of noir thrillers Richard Godwin a chilling story that explores family relations and the mind of a psychopath. A man takes a stranger into his house only to unleash a savage lesson from the past. “Godwin writes intelligent noir from a unique psychological perspective, delving deep into the nobler motives and emotions of his engaging characters while examining the darkest corners of the human heart. The faceless villain in this chiller is as real as a razor cut.” (Phil Bowie, author of the John Hardin suspense series) 16 reviews, 4.7 average star rating

Order THE PURE AND THE HATED here!

DADDY’S LITTLE SECRET: A Daughter’s Quest To Solve Her Father’s Brutal Murder is the poignant true crime story about a daughter who, upon her father’s murder, learns of his secret double-life. She had looked the other way about other hidden facets of his life – deadly secrets that could help his killer escape the death penalty, should she come forward. An inside look at the complex and fascinating psyche of a father who shared an uncommon bond with his daughter. “An engrossing true story about alternative lifestyles, domination, hidden secrets and a late night murder.” (John Ferak, bestselling author of FAILURE OF JUSTICE) 50 reviews, 4.2 average star rating

ICE AND BONE by Monte Francis

ICE AND BONE: Tracking An Alaskan Serial Killer is the chilling true account of how a demented murderer initially evaded police and avoided conviction only to slip back into the shadows and kill again. Award winning journalist and author Monte Francis tells the harrowing story of what eventually led to Wade’s capture, and reveals why the true scope of his murderous rampage is only now, more than a decade later, coming into view. “A chilling chronicle of victims brutally murdered by a cold, merciless killer, against a backdrop equally as unforgiving – the Last Frontier. Through meticulous reporting, Francis uncovers the shocking truth about how the Alaskan justice system failed and allowed a warped predator to strike again.” (Henry K. Lee, author of Presumed Dead: A True-Life Murder Mystery) 84 reviews, 4.2 average star rating

It's the holidays again! You're probably searching for and picking out the perfect present for everyone on your list. Consider this your reminder to treat yourself to something nice this holiday season, like free audiobooks with our Holiday Audiobook … END_OF_DOCUMENT_TOKEN_TO_BE_REPLACED

It's always a good day for free audiobooks! That's right! Free audiobooks! Just a gift from us to you, our readers.   Browse by genre and select the cover to get more information and your free copy! Non-Fiction True Crime Business … END_OF_DOCUMENT_TOKEN_TO_BE_REPLACED

Soon To Be A Documentary Series! My name is Suzanne Buchanan. There is an active arrest warrant for me in Thailand for articles I published on "The … END_OF_DOCUMENT_TOKEN_TO_BE_REPLACED

In this true crime-flavored novel, Detective William Boyett is called out on Mardi Gras evening in Mobile, Alabama to investigate the discovery of a … END_OF_DOCUMENT_TOKEN_TO_BE_REPLACED

Terrifying things are happening to Kay Weden, a forty-something single mom and high school teacher in Salisbury, North Carolina. Despite having no known enemies, Kay’s home, car, and peace of mind are under attack throughout 1993. Most chilling … END_OF_DOCUMENT_TOKEN_TO_BE_REPLACED

In “The Garden State Parkway Murders,” true crime writer and attorney Christian Barth dives into the harrowing story of the unsolved murders of Elizabeth Perry and Susan Davis. College friends, the two women were brutally knifed to death and their … END_OF_DOCUMENT_TOKEN_TO_BE_REPLACED

Losing a young daughter to murder is the worst nightmare that a mother could possibly imagine, but what if the killer was her son? Charity Lee was thrust into this unimaginable situation when her 13-year-old son Paris murdered her beloved 4-year-old … END_OF_DOCUMENT_TOKEN_TO_BE_REPLACED

On a cold Southern night in 2013 under a full moon, 20-year-old Heather Elvis parked her car at a boat ramp along the Intracoastal Waterway and was never seen again.  The disappearance of the beautiful, vivacious hostess at a … END_OF_DOCUMENT_TOKEN_TO_BE_REPLACED

“Ferak chronicles the long and sordid history of the Manitowoc County Sheriff’s department and the reason Sweaty’s license was suspended. Framing Avery was just par for the course." -- Kathleen Zellner In 2016-17, while working for the USA TODAY … END_OF_DOCUMENT_TOKEN_TO_BE_REPLACED

Joe Mac was a legendary homicide detective until his vision was lost in the line of duty and he was forced into retirement. Now he lives a life of darkness, his only friend being a huge Raven that Joe Mac names “Poe.” But when Joe Mac’s grandson … END_OF_DOCUMENT_TOKEN_TO_BE_REPLACED

Winner of the 2020 INDEPENDENT PRESS AWARD and 2018 LITERARY EXCELLENCE PENCRAFT AWARD A practicing attorney, author Anne K. Howard first contacted Howell while he was serving a fifteen-year sentence for the murder of one of his seven victims. He … END_OF_DOCUMENT_TOKEN_TO_BE_REPLACED

Winner of 7 Literary Awards!  “THE CRATE is an important and impressive piece of work. I’m glad it was written, and I’m glad I read it.” -- Lee Child, #1 New York Times bestselling author of the Jack Reacher Series After surviving the horrors … END_OF_DOCUMENT_TOKEN_TO_BE_REPLACED

The True Story Behind The Hit Film 'Casino' From An ‘Enforcer’ Who Lived It The Chicago organized crime family known as the “Outfit” dates back to the reign of the infamous Al Capone and prohibition. As the years passed and prohibition was repealed, … END_OF_DOCUMENT_TOKEN_TO_BE_REPLACED

The Captivating "True Story Of The World's Premier Forensic Investigators" at NecroSearch International Updated and Revised! Now Available for the First Time As Kindle eBook, Audible and iTunes Editions! A body stuffed in a car trunk swallowed by … END_OF_DOCUMENT_TOKEN_TO_BE_REPLACED

Some Cases You Solve. Some Cases You Survive. Naval Criminal Investigative Service Special Agent, Tyrone Benhoff is in purgatory. That’s what agents call it when they find themselves on the wrong side of command and are transferred to a place … END_OF_DOCUMENT_TOKEN_TO_BE_REPLACED

New from award-winning author Terry Persun! After the murder of his wife and unborn child, the only time freelance tech investigator Ten feels alive is when he cuts himself. For the last few years, he has taken freelance investigative jobs. Some of … END_OF_DOCUMENT_TOKEN_TO_BE_REPLACED

Coming January 29th to REELZChannel™! The DEADLY ASSOCIATES documentary! Step into Chicago during the 1960s and ‘70s, where mobsters influence everyone from strip-club owners to Teamsters, aldermen, judges, and local police. It is a world where … END_OF_DOCUMENT_TOKEN_TO_BE_REPLACED

"Lizzette Martinez’s story embodies the fire energy that gives light and life to survivors all around her! Survivors need to see strength and perseverance despite opposition, and Lizzette models just that." - Melissa Schuman, actress and singer In … END_OF_DOCUMENT_TOKEN_TO_BE_REPLACED

Soon To Be A Documentary Series! My name is Suzanne Buchanan. There is an active arrest warrant for me in Thailand for articles I published on "The Backpacker Murders" as the former owner and editor of the Samui Times. I am a British citizen and had … END_OF_DOCUMENT_TOKEN_TO_BE_REPLACED

In this true crime-flavored novel, Detective William Boyett is called out on Mardi Gras evening in Mobile, Alabama to investigate the discovery of a young woman’s body wrapped in a carpet in a vacant lot a few blocks from the parade route. Over … END_OF_DOCUMENT_TOKEN_TO_BE_REPLACED