For a limited time, get the hit true crime book, SketchCop by Michael W. Streed, for only 99cents! But hurry, the price will gradually increase after each day of the countdown. SketchCop details cases from Michael’s own portfolio as an internationally-recognized forensic facial imaging expert and police sergeant. For 35 years he has blended his rich law enforcement experience and artistic skills to provide forensic facial imaging services to some of the largest, most diverse, police agencies in the United States, including the Los Angeles and Baltimore City Police Departments. Get your copy here!

A mystique surrounds police composite sketches, which involve the merger of art and science. To be successful requires me to assume several roles — pop psychologist, armchair counselor, artist, scientist and investigator. My job is to mine the memories of crime victims and eyewitnesses and create monsters from them.
How I do that is the question I have been asked over and over again. The secret lies in my ability to merge the details of a victim’s memory with the lines and shadows that I lay down on paper. And while it might seem odd that something so powerful could come from nothing more than a few recollections and well-placed scribbles, it’s a formula that’s helped bring many criminals to justice. 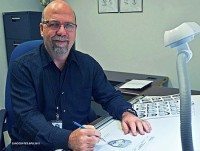 Acclaim for Michael Streed and SketchCop…

“Mike Streed is a cop – and one of California’s most vital artists…a standout in his field!“– Orange Coast Magazine, Orange County, CA

“Michael Streed is as passionate about being an artist as he is about being a cop.  It’s that passion which fuels his ground-breaking work.”–JuJu Chang, Correspondent – ABC News, New York

“SketchCop puts the entire investigation of my daughter’s murder in a context rarely available to the public.  Sarah, her friend, will be forever remembered for her unbelievable courage.  The two of you clearly made a wonderful team as you worked together to make sure the man who killed Samantha could never hurt another child.“– Erin Runnion, Samantha’s mother and Founder – The ‘Joyful Child Foundation’

“As insightful a read as it is fascinating, written by an expert who is in the know. A must-read for true crime fans and those interested in the fascinating world of real police work.” —Gary C. King, author of Blood Lust and Driven to Kill

You can buy SKETCHCOP in paperback AND Kindle eBook now by clicking the buttons below:

Help Us Spread the Word!

Start 2021 off right by reading more and learning more with free audiobooks! Browse by genre and select the cover to get more information and your free copy! Non-Fiction True Crime Business

With Michael W. Streed         The basics of composite sketching and how it fits into the investigation process: A composite sketch is a graphic representation of a person’s basic facial

A close call, with a close and famous case. Reading about famous true crime stories can be frightening. Being directly involved or on the fringe of one can be equally concerning. Throughout my career, I have been involved in many murder cases,

What a REAL Cop Thinks of TV Cops Many people just love reading about true crime and watching police procedural shows on television. ‘Real’ cops – not so much. Police officers spend so many hours a day living the real thing, many of them loathe

The SketchCop on writer’s block. When I wrote SketchCop – Drawing A Line Against Crime, I found that one of my biggest challenges was writer’s block. After a career spent writing millions of words, onto tens of thousands of pages of police reports,

Making faces and the impact of new forensic technology Technology continues to affect the way we live and work. Each day, companies are developing new tools and computer software programs that propel industry and help create products that make our

In 1976, a killer who called himself ‘The Son of Sam’ shot and killed a half dozen people and wounded as many more in New York City. During his crime spree, the madman left bizarre letters mocking the police and promising more deaths. After months … END_OF_DOCUMENT_TOKEN_TO_BE_REPLACED

It was the midcentury murder that fascinated a nation and kept it glued for two years to radio, television and newspapers through three trials. Did the handsome, wealthy doctor and his beautiful young paramour plan to kill his glamorous socialite … END_OF_DOCUMENT_TOKEN_TO_BE_REPLACED

WHY DO SERIAL KILLERS KILL? OUT OF THE MOUTHS OF SERIAL KILLERS​ is as close as you will ever come to discovering the answer ... and in the killer’s own words! In this one-of-a-kind book, author Mary Brett corresponded with some of America’s … END_OF_DOCUMENT_TOKEN_TO_BE_REPLACED

As the adopted son of two cult leaders, Benjamin Risha was raised to someday assume a place of leadership in the Tony and Susan Alamo Christian Foundation with the Bible, and his parents’ interpretation of it, as his guide. He believed the prophecies … END_OF_DOCUMENT_TOKEN_TO_BE_REPLACED