As usual, I awoke thinking. I think constantly and often think of myself as The Thinker by Rodin, actually I had a statue of it on my desk for many years until my arrest and I do not know what happened to it after that. I guess everyone loses almost everything when they are arrested and do time.

I actually think about everything I do. I think every job or scam out completely, and I always put myself in the other person’s place to think what they are thinking.  Some people have called me a physic at times, as I am also quite intuitive and can see what is happening in different situations.  My children just think I am paranoid, and I don’t have patience, but it’s really the opposite. I do have patience. I just do not allow others to know what I am thinking.

This morning I’ve been thinking about my life in Hollywood. I remember as a young boy growing up in a small town in upstate New York, our first TV was an Admiral. I recall watching the Kate Smith, Ed Sullivan and other famous shows and the entertainers on the shows.. I never thought that someday I would meet and get to know many of them, but it did happen. Some of you may not know these people, as they were famous back in the day, but the celebrities I met included Frank Sinatra, Dean Martin, Jerry Lewis, Don Rickles, Red Skelton, Keely Smith, Tina Louise and many more, even President Ronald Regan and his wife Nancy. Producers and Directors like Dino De Laurentis, Ralph Serpe and John Daly, Heads of studios and several agents like the legendary agent Jack Gilardi. at ICM.  Not only a legend but a dear friend.

Mateo’s restaurant on Westwood Blvd. was the place to go to on Sunday nights and I was normally there. President Regan had to go everywhere with his secret service team, so of course when he walked in it was a big thing. For some reason he would always shake my hand and was very cordial. Normally, he and Nancy would have dinner with Frank Sinatra, and his wife Barbara, and others. Smoking in those days was only allowed at the bar. So, when I went to the bar to have a cigarette Frank would come to have a smoke with me. One night he looked at me and said, “Kid, which ones are the secret service and which ones are the FBI agents watching you?” He knew, We just laughed. I really liked Frank as he was a real man.

Then, as times changed, I even got to know a lot of the Rappers and Hip-Hop artists like Wyclef John and Jerry Wonda. Haitian Jack even woke me up one night to meet 50 Cents, and several others that I cannot remember. Whoever would have thought that I became one of the guys in Hollywood that they call a Fixer? I never dreamed that I would become the guy all these people would come to resolve disputes in Hollywood.

As all of this is happening as I was doing my scams I was always being watch by the famous Los Angeles Gangster squad that Chief Parker assembled to rid Los Angeles of Italian Gangsters. And then the FBI organized crime task force in Los Angeles and other cities started surveilling me. There were so many cops and agents parked on my street that if I could have charged them for parking, I could have earned good money.

I always frequented the best restaurants and Hotels in Hollywood and Beverly Hills. I’ll never forget one night as I was waiting for my car from the valet at the Polo Lounge in Beverly  Hills where I had dinner, one of the special agents tailing me came up to me and said. “Spado, we love following you because we get to eat at the best places in town, and all on the expense account with the government paying” Believe it or not, it really happened.

Even with them constantly watching me, I still continued doing what I did. It wasn’t easy, but I did it. Losing their tail became second nature.  Every valet in Hollywood knew me. I would pull up, give them my car, and walk in the restaurant and right out the back before the agents following me got into the restaurant, where someone would be waiting to pick me up so I could take care of my business.

What a life, huh? Do I have any regrets? Who doesn’t have regrets, we all do, but it was my life and I own it. I feel this was my destiny, I did it my way.

THE ACCIDENTAL GANGSTER by Ori Spado and Dennis N. Griffin

Listen To An Audiobook Sample Of THE ACCIDENTAL GANGSTER

As usual, I awoke thinking. I think constantly and often think of myself as The Thinker by Rodin, actually I had a statue of it on my desk for many years until my arrest and I do not know what happened to it after that. I guess everyone loses almost … END_OF_DOCUMENT_TOKEN_TO_BE_REPLACED 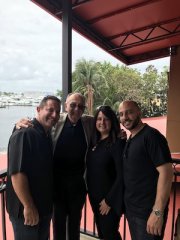 Orlando (Ori) Spado was born on December 17,1944 in Rome New York where he attended high school at Rome Free Academy and at the age of 18, he joined the U.S. Army and served his country proudly and was discharged honorably in 1966. He returned to … END_OF_DOCUMENT_TOKEN_TO_BE_REPLACED

What do Wyatt Earp, Belle Gunness, Big Foot the Renegade, Billy the Kid, and Dr. H.H. Holmes, and The Black Hand have in common? They were all subjects of true crime newspaper reporting in the 1800s, and now these stories and that of many others … END_OF_DOCUMENT_TOKEN_TO_BE_REPLACED

Will A Serial Killer Soon Walk The Streets Again? Don Miller was quiet and reserved.  As a former youth pastor, he seemed a devout Christian.  No one would have ever suspected that the recent graduate of the Michigan State University … END_OF_DOCUMENT_TOKEN_TO_BE_REPLACED

The public knows him as the character Tony Darvo in the movie Midnight Run, but Richie Salerno was born into the world of the Brooklyn Mafia during the heyday of the New York mob and for a time it looked like he'd get caught up in a life of … END_OF_DOCUMENT_TOKEN_TO_BE_REPLACED

The day we met in October of 1997, I was working at the District Court in Traverse City, Michigan as a Deputy Clerk.  It was like most other days with arraignments, sentencings, civil case hearings and the like. People shuffling in and out, … END_OF_DOCUMENT_TOKEN_TO_BE_REPLACED

A little before midnight on May 30, 1997, fourteen-year-old Brandy DuVall waited at a bus stop in the Denver area for a ride back to her grandparents' home after spending the evening at a friend’s home. She was wearing a bright-red Chicago Bulls … END_OF_DOCUMENT_TOKEN_TO_BE_REPLACED

UNDER A FULL MOON: The Last Lynching in Kansas tells of the tragic abduction and death of an eight-year-old girl at the hands of a repeat offender in 1932. This crime stands apart as the last mob lynching in Kansas. Based on true events, this account … END_OF_DOCUMENT_TOKEN_TO_BE_REPLACED

INCLUDES OVER 40 COLOR PHOTOGRAPHS! Frank Cullotta was best known for his exploits as an associate of the Chicago Outfit and his role as Tony Spilotro’s enforcer and street lieutenant in Las Vegas. However, he had another interest besides crime. … END_OF_DOCUMENT_TOKEN_TO_BE_REPLACED

What do Wyatt Earp, Belle Gunness, Big Foot the Renegade, Billy the Kid, and Dr. H.H. Holmes, and The Black Hand have in common? They were all subjects of true crime newspaper reporting in the 1800s, and now these stories and that of many others … END_OF_DOCUMENT_TOKEN_TO_BE_REPLACED

Will A Serial Killer Soon Walk The Streets Again? Don Miller was quiet and reserved.  As a former youth pastor, he seemed a devout Christian.  No one would have ever suspected that the recent graduate of the Michigan State University … END_OF_DOCUMENT_TOKEN_TO_BE_REPLACED

As the adopted son of two cult leaders, Benjamin Risha was raised to someday assume a place of leadership in the Tony and Susan Alamo Christian Foundation with the Bible, and his parents’ interpretation of it, as his guide. He believed the prophecies … END_OF_DOCUMENT_TOKEN_TO_BE_REPLACED