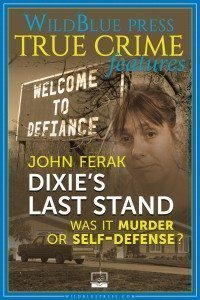 Dixie Shanahan had a terribly troubled and abusive marriage in the sleepy little town of Defiance, Iowa. Then one summer day in 2002, Dixie’s mean and wicked husband was gone. Some of the local residents presumed that Scott packed his bags and left town. But others were skeptical. After all, Scott’s brown Ford pick-up truck was still parked in his driveway. The disappearance mystified Defiance for more than a year. Then in late October, 2003, the truth emerged … or did it?

What Other’s Are Saying About DIXIE’S LAST STAND:

“A well-written, and gripping depiction of ‘battered wife syndrome’. … This fascinating story will leave you asking yourself one question: Was the punishment that Dixie received in her case justified? Highly recommended for all true crime readers.” — RJ Parker, bestselling true crime author and publisher at RJ Parker Publishing Inc. 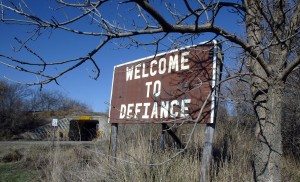 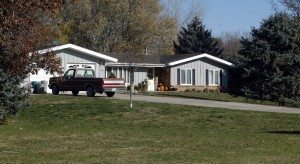 Shanahan ran outside. She met the sheriff’s deputy on the sidewalk, near the front bay window. Dixie wasn’t in a friendly mood. She was curious why Kelly had the nerve to pull into her driveway. She thought the cop’s appearance during the middle of the day would surely create a stir around the small-town rumor mill. Unbeknownst to her at the time, rumors were the sole reason why deputy Kelly had popped over to speak with Dixie in the first place.

From the author: DIXIE’S LAST STAND: WAS IT MURDER OR SELF-DEFENSE? presents a number of interesting dilemmas for America’s criminal justice system. Do these get-tough-on-crime mandatory prison sentencing laws that tend to treat all violent crimes in a cookie-cutter fashion need to be abolished? And what’s the fine line between self-defense and intentional, premeditated murder in a case that involves repeated instances of domestic violence? Under that scenario, should it be OK for the spouse who feels trapped and threatened in a horribly abusive and rocky marriage to go ahead and kill her lousy, no-good husband? On the other spectrum, what if the facts of the death scene were pretty black and white. What if the domestic violence victim was not being beaten or threatened at that particular time? What if the woman just killed her abusive husband during the night while he comfortably slept? If those were the cold, hard facts, should the woman be thrown in prison and treated like any other hardened, cold-blooded killer who takes up space in one of our country’s many maximum security prisons?

From DIXIE’S LAST STAND: Scott grew violent. Their marriage was over, he shouted. He told Dixie she had exactly five seconds to get out of their house. He began counting. One, two, three, four and five. But she hadn’t left. Scott was furious. He clutched her arm. He hauled her straight into the garage. This time, she tried to stand up to him. She threatened to call the police on him. Scott went berserk. He fumed and grabbed his wife by her long dark hair. “I will show you what happens when you call the sheriff,” Scott yelled as he drilled his wife back and forth with his fists. Before long, Dixie’s head also bled. Eventually, Scott used a long metal object to strike both her legs. When the beatings were over, Scott went around the house and unplugged their landline phones. He wanted to be damn sure that Dixie had no way to call the sheriff’s office. Award-winning journalist and author John Ferak, also wrote the acclaimed true crime book BLOODY LIES.

“Brilliantly written example of impeccable research by a true professional journalist, BLOODY LIES is one of the most outstanding true crime books of the year. A must read! — Burl Barer, Edgar-winning true-crime author of MAN OVERBOARD

“In BLOODY LIES, John Ferak brings a top-notch investigative journalist credentials and search for the truth together with masterful story-telling for one of the best true crime books of the year.” – Steve Jackson, New York Times Bestselling author of BOGEYMAN

“BLOODY LIES is both a compelling read and a gut punch to our confidence in law enforcement.” — Bill Osinski, author of GUILTY BY POPULAR DEMAND

“An expertly written true crime story where what happens AFTER the murders is so outrageous that it — and not the instigating crimes themselves — are what this book is about… This appears to be John Ferak’s first book. I found that surprising, but then I learned he’s an experienced journalist. It sure as hell had better not be his last book!” — Tom Wescott, author of THE BANK HOLIDAY MURDERS

What other people are saying about John Ferak’s true crime writing: “Extensively researched, informative, and very well written! Awesome perspectives of everyone who had anything to do with the case or the people involved. Could not put it down. Thank you John for writing this book. It’s a horrific tragedy that with so many turn of events.” — Cindy Plzak

“I REALLY enjoyed this book. It was so well researched and very well written … It breaks my heart in so many ways to know there are crooked cops, crooked CRIME SCENE ANALYSTS, and small town gossip and hate that can grow like a cancer, even when”suspects” are completely innocent.” — Emily Donner

“The author blends suspense, drama and horror like no other non-fiction book I have ever read. Outstanding.” — Jane Sabrio

“The book is extraordinary, not only because it is sensationally written, but because it contains three elements not in Capote’s “In Cold Blood”: (1) two people, falsely accused of murder, whose lives were nearly destroyed; (2) the impact of DNA on proving identities of the the two actual perpetrators; and (3) most importantly — “dirty” law enforcement, a bad CSI and several cops who lacked conscience or empathy toward their victims.” — Michael Nolan

“Great Read keeps you on edge of your seat. Showing the inside of a murder investigation; gone awry. John is probably one of the best true crime authors I have read in years. I have worked on murder cases for many years.” — Susan Curry

“Author John Ferak has done a magnificent job of cataloging the greatest failures in the history of Nebraska Law Enforcement when inexperienced and inept local deputies joined forces with arrogant and still-employed Nebraska State Patrol Investigators and a corrupt CSI leader to ruin the lives of 2 men.” — Sheepdog

“This book is a must read for true crime afianados. It is well written. The author had done a lot of research, but it is written in good story form. I enjoyed the book. It kept me on the edge of my seat. It is a shame what had happened here. The double homicide most definitely, but also the antics happening after, during the investigation.” — George W. Brown Sr.

“Ferak chronicles the long and sordid history of the Manitowoc County Sheriff’s department and the reason Sweaty’s license was suspended. Framing Avery was just par for the course." -- Kathleen Zellner In 2016-17, while working for the USA TODAY … END_OF_DOCUMENT_TOKEN_TO_BE_REPLACED

'MAKING A MURDERER' TIMES SIX! If the dubious efforts of law enforcement that led to the case behind MAKING A MURDERER made you cringe, your skin will crawl at the injustice portrayed in FAILURE OF JUSTICE: A Brutal Murder, An Obsessed Cop, Six … END_OF_DOCUMENT_TOKEN_TO_BE_REPLACED

Tainted Evidence In The Murder of Jessica O'Grady?   Jessica O’Grady was a tall, starry-eyed co-ed in search of finding her Mr. Right. Christopher Edwards was a 19-year-old deceitful and darkened soul. David Kofoed was a veteran crime lab … END_OF_DOCUMENT_TOKEN_TO_BE_REPLACED

In 2018, WildBlue Press released 29 new titles! Among those titles, twenty-one were under the true crime genre, four were thrillers, two mysteries, and one business book as well as one fantasy book. From winning awards to being featured on … END_OF_DOCUMENT_TOKEN_TO_BE_REPLACED

John Ferak, author of WildBlue's hit true crime book FAILURE OF JUSTICE, was recently featured on the True Murder radio show with host Dan Zupansky to discuss his book. FAILURE OF JUSTICE details the case of the Beatrice Six, which is the largest … END_OF_DOCUMENT_TOKEN_TO_BE_REPLACED

Watch John Ferak's interview with Al Warren on The House of Mystery Radio Show. John discusses his new true crime book, FAILURE OF JUSTICE, which details the largest wrongful conviction case in U.S. history! Get your copy of FAILURE OF JUSTICE … END_OF_DOCUMENT_TOKEN_TO_BE_REPLACED

John Ferak is an award-winning investigative journalist and true crime author. His latest true crime book, FAILURE OF JUSTICE, details the largest wrongful conviction case in the United States to date. John was on The House of Mystery Radio Show with … END_OF_DOCUMENT_TOKEN_TO_BE_REPLACED

John Ferak was on Darkness Radio with host Dave Schrader on Tuesday, May 24th, from 10-11pm Central Time. John will be discussed his new true crime book, FAILURE OF JUSTICE: A Brutal Murder, An Obsessed Cop, Six Wrongful Convictions, as well as his … END_OF_DOCUMENT_TOKEN_TO_BE_REPLACED

“Ferak chronicles the long and sordid history of the Manitowoc County Sheriff’s department and the reason Sweaty’s license was suspended. Framing Avery was just par for the course." -- Kathleen Zellner In 2016-17, while working for the USA TODAY … END_OF_DOCUMENT_TOKEN_TO_BE_REPLACED

'MAKING A MURDERER' TIMES SIX! If the dubious efforts of law enforcement that led to the case behind MAKING A MURDERER made you cringe, your skin will crawl at the injustice portrayed in FAILURE OF JUSTICE: A Brutal Murder, An Obsessed Cop, Six … END_OF_DOCUMENT_TOKEN_TO_BE_REPLACED

Tainted Evidence In The Murder of Jessica O'Grady?   Jessica O’Grady was a tall, starry-eyed co-ed in search of finding her Mr. Right. Christopher Edwards was a 19-year-old deceitful and darkened soul. David Kofoed was a veteran crime lab … END_OF_DOCUMENT_TOKEN_TO_BE_REPLACED

In 2018, WildBlue Press released 29 new titles! Among those titles, twenty-one were under the true crime genre, four were thrillers, two mysteries, … END_OF_DOCUMENT_TOKEN_TO_BE_REPLACED

John Ferak was on Darkness Radio with host Dave Schrader on Tuesday, May 24th, from 10-11pm Central Time. John will be discussed his new true crime … END_OF_DOCUMENT_TOKEN_TO_BE_REPLACED

Born in 1960, Jesus Ruiz Henao grew up poor, but wanted to be rich like the drug dealers he saw growing up in the cocaine-producing region of Colombia’s Valle of the Cauca. To realize his ambition, Ruiz Henao moved to London, United Kingdom, in … END_OF_DOCUMENT_TOKEN_TO_BE_REPLACED

As the adopted son of two cult leaders, Benjamin Risha was raised to someday assume a place of leadership in the Tony and Susan Alamo Christian Foundation with the Bible, and his parents’ interpretation of it, as his guide. He believed the prophecies … END_OF_DOCUMENT_TOKEN_TO_BE_REPLACED

In 1976, a killer who called himself ‘The Son of Sam’ shot and killed a half dozen people and wounded as many more in New York City. During his crime spree, the madman left bizarre letters mocking the police and promising more deaths. After months … END_OF_DOCUMENT_TOKEN_TO_BE_REPLACED

Investigators and Central Florida residents were horrified when 16-year-old vampire cult leader Rod Ferrell was arrested and charged with bludgeoning a cult member's parents. When they realized the slain couple's 15-year-old daughter was missing, … END_OF_DOCUMENT_TOKEN_TO_BE_REPLACED