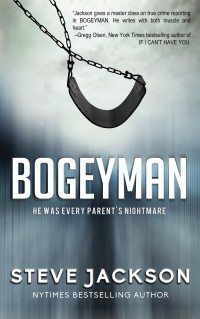 BOGEYMAN: He Was Every Parent’s Nightmare was published by WildBlue Press in August 2014

BOGEYMAN: He Was Every Parent’s Nightmare. The inspirational true crime story describing in dramatic detail the efforts of tenacious Texas lawmen to solve the cold case murders of three little girls and hold their killer accountable for his horrific crimes. An incredible police procedural from award-winning journalist and author Steve Jackson that begins in January 1985 and in a very real sense continues to this day as police detectives push to bring other cases against serial child killer David Elliott Penton.

He writes with both muscle and heart …”

– Gregg Olsen, NY Times bestselling author of The Girl In The Woods 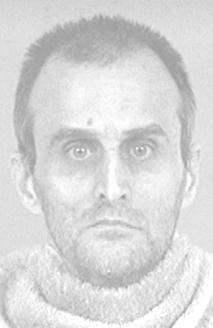 From BOGEYMAN: He Was Every Parent’s Nightmare: “For years he’d stalked elementary schools, neighborhoods and playgrounds looking for young girls to abduct, rape and murder. With some exceptions, he concentrated on black, Asian or Hispanic girls living in low-income areas. He thought of them as “throwaway kids”—hardly missed, and soon forgotten, except by those who loved them; just sad cold case files gathering dust in police records rooms. As though invisible, he brazenly struck in broad daylight, pulling children into his van or cars, or he crept into homes in the dead of night to carry away little girls while their families slept. He was every parent’s worst nightmare. The bogeyman they warned their children about disguised as the friendly stranger who offered candy, cookies and ice cream to entice his victims close enough to grab. The fiend who lurked in the shadows outside of bedroom windows.”

“In a time when we are consistently being made aware of the “bad apples” in policing, it was nice to be reminded that there are even more “good guys” working tirelessly and, sometimes, thanklessly to find justice, no matter the cost. I applaud Mr. Jackson for identifying the need for this book to be written and doing so in such an insightful manner.”—Tara

“Steve once again delivers an excellent read. …Steve has told this horrific story with dignity and grace for those involved and really made their emotions come alive.”—Lisa Burleson Bennie

“What a great story about great police work and also a sad story for the families of the girls that were taken. Monsters exist. But so do monster hunters.”—R Gregg

“I have read many true crime stories and this is one of the best. … I am thankful that we have professionals out there with determination and willing to work hard so that all our children are a little safer!”—Terri Johnson

“Jackson constructs the narrative in a way that makes the reader feel as though he or she is working alongside the detectives, experiencing the frustrations and hardships of trying to bring this perpetrator to justice.”—tree0789

“I highly recommend this book to anyone who reads True Crime. This is a horrific and heartbreaking story and you won’t be able to stop reading once you start.”—Kindle Surfer

“I have had two brothers murdered and know how it feels to be a victim’s family member! This book is about justice and truth!”—Wayne Johnson

“Bogeyman by Steve Jackson is a page turner! Lock your doors and windows and keep your children close! If you only read one book this year – make it this one!”—Mary Mccutcheon Dobbins

“This book will certainly open your eyes to how hard our police officers work, and how much they suffer emotionally and sometimes it takes its toll on them and their private lives. I hope everyone enjoys this book as much as I did.”—Jerry O Fickling

“A fascinating read. Having personally interacted with the men and women who keep us safe, this a worthy tribute to all that they do! … My hat is off to you Mr. Jackson!”—Jon Keehner

From the book: “Gary Sweet opened the door of the “murder closet” and stepped inside. The small, windowless room in the basement of the Garland Police Department held the agency’s files for unsolved murders stacked in row after row from floor to ceiling in bankers’ boxes. Contained within each were the ghosts of justice interrupted, of nightmares without end, and of tears uncounted. Waiting for someone to care.”

From the author: I think what made BOGEYMAN unique for me as a writer wasn’t the killer’s story, or even the exceptional detective work that went into bringing Penton to justice. The book gives us a poignant and powerful inside look at the emotional, psychological and physical toll a case like this has on the men and women of law enforcement, as well as on their families; those usually unseen, and rarely revealed, stories of courage, faith and sacrifice on behalf of the victims, the victims’ families, and their communities.

Two Great True Crime Books For The Price Of One! Filling Out The Form Also Enters You To Win One Of Four Signed Print Copies Of SMOOTH … END_OF_DOCUMENT_TOKEN_TO_BE_REPLACED

Date: August 7, 2014 Garland police detective Gary Sweet discusses on Dallas WFAA television how he got involved in the case that was the basis for … END_OF_DOCUMENT_TOKEN_TO_BE_REPLACED

It was a stimulating and inspirational day at our most recent salon in Cardiff-by- the-sea (or so I’m told). I was thrilled that a couple of repeat attendees said they … END_OF_DOCUMENT_TOKEN_TO_BE_REPLACED

Born in 1960, Jesus Ruiz Henao grew up poor, but wanted to be rich like the drug dealers he saw growing up in the cocaine-producing region of Colombia’s Valle of the Cauca. To realize his ambition, Ruiz Henao moved to London, United Kingdom, in … END_OF_DOCUMENT_TOKEN_TO_BE_REPLACED

As the adopted son of two cult leaders, Benjamin Risha was raised to someday assume a place of leadership in the Tony and Susan Alamo Christian Foundation with the Bible, and his parents’ interpretation of it, as his guide. He believed the prophecies … END_OF_DOCUMENT_TOKEN_TO_BE_REPLACED

In 1976, a killer who called himself ‘The Son of Sam’ shot and killed a half dozen people and wounded as many more in New York City. During his crime spree, the madman left bizarre letters mocking the police and promising more deaths. After months … END_OF_DOCUMENT_TOKEN_TO_BE_REPLACED

Investigators and Central Florida residents were horrified when 16-year-old vampire cult leader Rod Ferrell was arrested and charged with bludgeoning a cult member's parents. When they realized the slain couple's 15-year-old daughter was missing, … END_OF_DOCUMENT_TOKEN_TO_BE_REPLACED