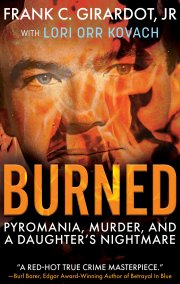 For years Lori Orr believed her Los Angeles firefighter dad was a selfless hero. When Lori’s dad was arrested and charged with four murders and countless arson fires, it was her testimony that helped keep him from being sent to Death Row. Eventually, Lori’s search for the truth lead her to the dark secrets lurking in her family’s past and to an inescapable conclusion about the remorseless killer and arsonist known as the “Pillowcase Pyro” and his reign of terror in sunny Southern California.

Together with award-winning journalist Frank C. Girardot Jr., Orr looks back on the journey that took her from love to fear and the search for answers about how the father she loved could also be a thrill-seeking predator. A predator brought to justice by a dogged investigator no one wanted to believe. A master manipulator who participated in the writing of this memoir in hopes that it would redeem him in the eyes of his family and others who trusted and believed in him.

I sat at my desk in my cubicle at the insurance company waiting. My stepmother, Wanda, called and told me the verdict was in; she sounded scared.

Times have changed so much. I didn’t have a smart phone, internet or news readily at my fingertips. I had a little radio on my desk that I normally listened to music on, but that day, I tuned in to an AM news station. It was almost 4 p.m. and I knew the verdict was coming soon; I was sure the courthouse closed right at 5 p.m. I wasn’t getting any work done; I was bent over my desk with my ear to the radio waiting for the verdict. I kept the volume low, so no one else would hear. 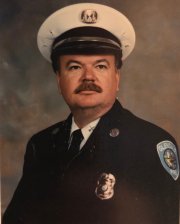 John Orr’s official photo was widely circulated after his arrest on suspicion of arson and during his murder trial.

My boss, Susie Thompson, who was also a very good friend, knew about my dad and what I was waiting for. Finally, at almost 5 p.m., I heard a news reporter say the verdict was in.

This whole time I assumed my dad was on trial for arson. He only allowed me to attend two days of the trial and he picked the days. I was stunned. I put my head down on my desk and cried. My heart was so heavy. So many things went through my head. He will never walk me down the aisle, know my children or celebrate Father’s Day with me. I just lost my Dad, for the second time …

That Friday afternoon, I got a call from my dad’s attorney. He asked my sister, mom and me to come down to his office on Saturday to prep for the sentencing phase of the trial beginning Monday.

Sentencing phase? I had never even heard of that. I certainly didn’t know that it meant my dad was facing the death penalty. The thought was too much to handle. How many 23-year-old young ladies are asked to testify so their father won’t get the death penalty?

I was still in shock over the verdict, but I went into “I need to save him” mode. I gathered pictures of my son and met with the attorneys. All three of us would be testifying as well as my grandma and grandpa. My dad’s life rested in our hands. What if I don’t say the right thing or act the right way? What if I don’t do enough and he dies? Is that my fault? Would I want to be there when they execute him? It was too overwhelming. I didn’t even have a political opinion on the death penalty and I probably never will.

I sat on the bench in the cold, long hallway of the Los Angeles County courthouse waiting for them to call me to testify. My stomach was in knots and I made sure to locate the nearest bathroom. Shortly after, we saw the Michael Jackson family exiting the courtroom holding hands and crying. It was Jermaine Jackson, his mother, father and their entourage. I later found out that Jermaine Jackson’s wife was murdered and the person responsible was just found guilty. I guess guilty verdicts were in the air that week.

They didn’t see their dad much, he was usually out fighting fires or carousing, but when they did Lori and Carrie Orr often were being introduced to a new wife, girlfriend or dog in their fathers house.

The bailiff called my name. I stood up with my legs trembling and my stomach with more butterflies than anyone could imagine. I entered the courtroom. It was crowded. I didn’t know anyone in the room, except my dad. I walked past the spectators and then up the middle of the room toward the judge. That’s when I spotted my dad off to the right. I looked at him. He stared at me. I expected a nod or an “I love you” or something. He just stared. I walked up the stairs and was sworn in. I looked out into the audience and felt like I was in a movie. It was like the world stood still for a moment. I felt like everyone could hear my heart beating, it was pounding so hard.

Then they put a picture of my 2-year-old son on a large screen. Someone asked if I would allow my son to visit my dad in jail and maintain a relationship. I said that I would; my dad had maintained his innocence all this time, why wouldn’t I? I believed in his innocence—after all, he was my dad.

After we testified, we didn’t hear anything from anyone. Not the attorneys, not my dad, no one. Then, Wanda called.

The sentence was in.

Soon To Be A Documentary Series! My name is Suzanne Buchanan. There is an active arrest warrant for me in Thailand for articles I published on "The Backpacker Murders" as the former owner and editor of the Samui Times. I am a British citizen and had … END_OF_DOCUMENT_TOKEN_TO_BE_REPLACED

Coming January 29th to REELZChannel™! The DEADLY ASSOCIATES documentary! Step into Chicago during the 1960s and ‘70s, where mobsters influence everyone from strip-club owners to Teamsters, aldermen, judges, and local police. It is a world where … END_OF_DOCUMENT_TOKEN_TO_BE_REPLACED

"Lizzette Martinez’s story embodies the fire energy that gives light and life to survivors all around her! Survivors need to see strength and perseverance despite opposition, and Lizzette models just that." - Melissa Schuman, actress and singer In … END_OF_DOCUMENT_TOKEN_TO_BE_REPLACED

Step inside the death chamber and behind the walls of Ohio’s death row. Bill Kimberlin, Psy.D, invites the reader on an extensive and unbiased journey inside Ohio’s death row in WATCH ME DIE: Last Words From Death Row. You will see how these … END_OF_DOCUMENT_TOKEN_TO_BE_REPLACED

"The wheels of justice turn slowly, but grind exceedingly fine." Renee Fehr knew that Gregory Houser killed her sister Sheryl. There was not a single doubt in her mind. Yet for 27 years Houser walked free. But Renee wouldn’t rest … END_OF_DOCUMENT_TOKEN_TO_BE_REPLACED

On the early morning of March 6, 1993, an intense fire broke out in a tiny nursery. Sixteen minutes later, firefighters had extinguished the blaze, only to reveal a room burned so severely, everything was virtually unrecognizable. Then, they were … END_OF_DOCUMENT_TOKEN_TO_BE_REPLACED

During the early morning hours of July 17, 1983, fatigue became a factor for the young couple from central Illinois who spent their day under the hot sun at Marriott’s Great America amusement park north of Chicago. On their drive home, the tired … END_OF_DOCUMENT_TOKEN_TO_BE_REPLACED

Some Cases You Solve. Some Cases You Survive. Naval Criminal Investigative Service Special Agent, Tyrone Benhoff is in purgatory. That’s what agents call it when they find themselves on the wrong side of command and are transferred to a place … END_OF_DOCUMENT_TOKEN_TO_BE_REPLACED

New from award-winning author Terry Persun! After the murder of his wife and unborn child, the only time freelance tech investigator Ten feels alive is when he cuts himself. For the last few years, he has taken freelance investigative jobs. Some of … END_OF_DOCUMENT_TOKEN_TO_BE_REPLACED

Coming January 29th to REELZChannel™! The DEADLY ASSOCIATES documentary! Step into Chicago during the 1960s and ‘70s, where mobsters influence everyone from strip-club owners to Teamsters, aldermen, judges, and local police. It is a world where … END_OF_DOCUMENT_TOKEN_TO_BE_REPLACED

"Lizzette Martinez’s story embodies the fire energy that gives light and life to survivors all around her! Survivors need to see strength and perseverance despite opposition, and Lizzette models just that." - Melissa Schuman, actress and singer In … END_OF_DOCUMENT_TOKEN_TO_BE_REPLACED

Soon To Be A Documentary Series! My name is Suzanne Buchanan. There is an active arrest warrant for me in Thailand for articles I published on "The Backpacker Murders" as the former owner and editor of the Samui Times. I am a British citizen and had … END_OF_DOCUMENT_TOKEN_TO_BE_REPLACED

In this true crime-flavored novel, Detective William Boyett is called out on Mardi Gras evening in Mobile, Alabama to investigate the discovery of a young woman’s body wrapped in a carpet in a vacant lot a few blocks from the parade route. Over … END_OF_DOCUMENT_TOKEN_TO_BE_REPLACED