Get BROOKLYN'S MOST WANTED
eBook 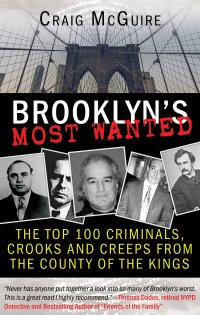 BROOKLYN’S MOST WANTED is now available from WildBlue Press! Order your copy today!

“Brooklyn’s Most Wanted” parades an impressive perp walk of 100 of the Borough’s most notorious, ranking them meticulously from bad to worst. From crime bosses to career criminals to corrupt politicians, pedophile priests to Ponzi scammers, this is not your usual crime chronicle. You want labor racketeering, Ponzi scheming, hijacking, murder, loan sharking, arson, illegal gambling, money laundering? Fugetaboutit!

Take this guided tour through gangland that rips open the underbelly of Brooklyn, the broken land, to see what spills, from the South Brooklyn Boys to the Soviet thugs of Brighton Beach’s Little Odessa.

Want to know what Billy the Kid, John Wilkes Booth and the Son of Sam all have in common?

Anthony “Gaspipe” Casso, Al Capone, Frankie Yale, Paul Vario, Roy DeMeo and so many more malicious malcontents and maniacs stalk these pages, as author Craig McGuire rank a rogues’ gallery of the best of the worst from Brooklyn’s crime-ridden past and present.

This includes more than a century of screaming crime blotter headlines, spotlighting epic cases, like The Brooklyn Godmother, The Sex Killer of Brooklyn, The Nurse Girl Murder, The Long Island Railroad Massacre, The Thrill Kills Gang, and many more. From “Son of Sam” to “Son of Sal,” “Little Lepke” to “Big Paulie,” “The Butcher of Brooklyn,” “The Vampire of Brooklyn,” “The Gang Who Couldn’t Shoot Straight,” even “The Man Who Murdered Brooklyn Baseball,” they’re all here.

Much more than Murder Incorporated, this book features kingpins and lone wolves alike, with a line-up featuring many of the multi-ethnic mobs mimicking the original La Cosa Nostra– the Russian Mafia, the Albanian Mafia, the Polish Mafia, the Greek Mafia– in fact, this book contains more Mafias than you can shake a bloody blackjack at.

“Never has anyone put together a look into so many of Brooklyn’s worst. This is a great read I highly recommend.” – Thomas Dades, retired NYPD Detective and Bestselling Author of “Friends of the Family: The Inside Story of the Mafia Cops Case”

What makes one crime more notorious than all the others?

Is it the hey-I-know-that-bank setting? The you-couldn’t-make-this-stuff-up motive? The are-you-kidding-me cast of characters? The that-could-be-me innocents with guns to their heads?

All of the above? 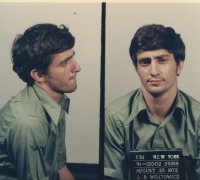 Little did John Wojtowicz know that on the morning of Tuesday, August 22, 1972, when he and two armed accomplices stormed the Chase Manhattan Bank at 450 Avenue P and East Third Street out on the edge of Gravesend, that they would be the the center of a hostage crisis unfolding on live television.

He was just trying to pay for his boyfriend’s sex-change operation.

The botched Brooklyn holdup led to a dramatic 14-hour hostage siege captured in a compelling Life magazine article, “The Boys in the Bank,” by P.F. Kluge and Thomas Moore.

That led to the provocative 1975 film “Dog Day Afternoon” directed by Sidney Lumet and starring Al Pacion, John Cazale, and Charles Durning. And that led to six Academy Award nominations in 1975, winning the Oscar for Best Screenplay.

Those of us from Brooklyn know that nowhere is the summertime slaughter on the senses as insufferable as when we descend into the depths of the Dog Days. I imagine that when Wojtowicz walked down Avenue P that morning he saw those familiar waves of shimmering heat drawing up from the Brooklyn blacktop.

In the Northern hemisphere during the summer months at sunrise that Orion’s hound, the Dog Star of Sirius in the constellation Canis Major, is visible just above the Eastern horizon. The ancient Greeks lamented such glimpses of the Dog Star, for they knew of the infernal heat sure to follow.

Anyone from Brooklyn knows how strange things can happen during the Dog Days of summer.

While based on the events of that Dog Day afternoon, the film departed from reality in key aspects, as itemized in a rant written by Wojtowicz and submitted to The New York Times upon the film’s release.

The more recent 2014 documentary, “The Dog,” hewed closer to the fantastic facts provided by Wojtowicz , who died before its release.

Flash back to August 1972. Wojtowicz, 27 years old, was a married man and Vietnam veteran living a double life of lies. A gay man exploring his sexually in New York’s underground at a time when the Gay Rights Movement was taking shape, Wojtowicz decided to rob a bank to pay for his boyfriend’s sex-change operation. Now there is a backstop plot for a movie, and the plot only thickened from there.

“A thorough compendium of the dark side of Brooklyn history and criminal activity complete with probing questions… Fascinating, compelling, well written and thoroughly researched. Macabre but a fun read.”- Professor Emeritus John B. Manbeck, former Brooklyn Borough Historian (1993-2002), author and/or editor of nine books on Brooklyn, New York, its history, culture, and people.

It's the holidays again! You're probably searching for and picking out the perfect present for everyone on your list. Consider this your reminder to treat yourself to something nice this holiday season, like free audiobooks with our Holiday Audiobook … END_OF_DOCUMENT_TOKEN_TO_BE_REPLACED

It's always a good day for free audiobooks! That's right! Free audiobooks! Just a gift from us to you, our readers.   Browse by genre and select the cover to get more information and your free copy! Non-Fiction True Crime Business … END_OF_DOCUMENT_TOKEN_TO_BE_REPLACED

We know how hard 2020 has been. To help you end the year on a better note, we wanted to give you the gift of free audiobooks! Hence, the Holiday 2020 Audiobook Giveaway! You're probably thinking of gifts for others right now, like we always do during … END_OF_DOCUMENT_TOKEN_TO_BE_REPLACED 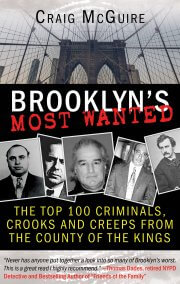 "Brooklyn’s Most Wanted" parades an impressive perp walk of 100 of the Borough’s most notorious, ranking them meticulously from bad to worst. From crime bosses to career criminals to corrupt politicians, pedophile priests to Ponzi scammers, this is … END_OF_DOCUMENT_TOKEN_TO_BE_REPLACED 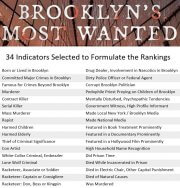 With the development of any book, there is a story behind the story. This is a story about Brooklyn. Or rather, it’s a book about the dark side of where we’re from. Writing “Brooklyn’s Most Wanted – Ranking the Top 100 Most Notorious … END_OF_DOCUMENT_TOKEN_TO_BE_REPLACED

Soon To Be A Documentary Series! My name is Suzanne Buchanan. There is an active arrest warrant for me in Thailand for articles I published on "The Backpacker Murders" as the former owner and editor of the Samui Times. I am a British citizen and had … END_OF_DOCUMENT_TOKEN_TO_BE_REPLACED

Coming January 29th to REELZChannel™! The DEADLY ASSOCIATES documentary! Step into Chicago during the 1960s and ‘70s, where mobsters influence everyone from strip-club owners to Teamsters, aldermen, judges, and local police. It is a world where … END_OF_DOCUMENT_TOKEN_TO_BE_REPLACED

"Lizzette Martinez’s story embodies the fire energy that gives light and life to survivors all around her! Survivors need to see strength and perseverance despite opposition, and Lizzette models just that." - Melissa Schuman, actress and singer In … END_OF_DOCUMENT_TOKEN_TO_BE_REPLACED

Step inside the death chamber and behind the walls of Ohio’s death row. Bill Kimberlin, Psy.D, invites the reader on an extensive and unbiased journey inside Ohio’s death row in WATCH ME DIE: Last Words From Death Row. You will see how these … END_OF_DOCUMENT_TOKEN_TO_BE_REPLACED

"The wheels of justice turn slowly, but grind exceedingly fine." Renee Fehr knew that Gregory Houser killed her sister Sheryl. There was not a single doubt in her mind. Yet for 27 years Houser walked free. But Renee wouldn’t rest … END_OF_DOCUMENT_TOKEN_TO_BE_REPLACED

On the early morning of March 6, 1993, an intense fire broke out in a tiny nursery. Sixteen minutes later, firefighters had extinguished the blaze, only to reveal a room burned so severely, everything was virtually unrecognizable. Then, they were … END_OF_DOCUMENT_TOKEN_TO_BE_REPLACED

During the early morning hours of July 17, 1983, fatigue became a factor for the young couple from central Illinois who spent their day under the hot sun at Marriott’s Great America amusement park north of Chicago. On their drive home, the tired … END_OF_DOCUMENT_TOKEN_TO_BE_REPLACED

Some Cases You Solve. Some Cases You Survive. Naval Criminal Investigative Service Special Agent, Tyrone Benhoff is in purgatory. That’s what agents call it when they find themselves on the wrong side of command and are transferred to a place … END_OF_DOCUMENT_TOKEN_TO_BE_REPLACED

New from award-winning author Terry Persun! After the murder of his wife and unborn child, the only time freelance tech investigator Ten feels alive is when he cuts himself. For the last few years, he has taken freelance investigative jobs. Some of … END_OF_DOCUMENT_TOKEN_TO_BE_REPLACED

Coming January 29th to REELZChannel™! The DEADLY ASSOCIATES documentary! Step into Chicago during the 1960s and ‘70s, where mobsters influence everyone from strip-club owners to Teamsters, aldermen, judges, and local police. It is a world where … END_OF_DOCUMENT_TOKEN_TO_BE_REPLACED

"Lizzette Martinez’s story embodies the fire energy that gives light and life to survivors all around her! Survivors need to see strength and perseverance despite opposition, and Lizzette models just that." - Melissa Schuman, actress and singer In … END_OF_DOCUMENT_TOKEN_TO_BE_REPLACED

Soon To Be A Documentary Series! My name is Suzanne Buchanan. There is an active arrest warrant for me in Thailand for articles I published on "The Backpacker Murders" as the former owner and editor of the Samui Times. I am a British citizen and had … END_OF_DOCUMENT_TOKEN_TO_BE_REPLACED

In this true crime-flavored novel, Detective William Boyett is called out on Mardi Gras evening in Mobile, Alabama to investigate the discovery of a young woman’s body wrapped in a carpet in a vacant lot a few blocks from the parade route. Over … END_OF_DOCUMENT_TOKEN_TO_BE_REPLACED