Get THE OBITUARY
eBook 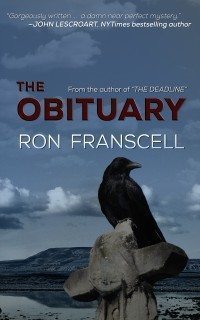 THE OBITUARY – A Jefferson Morgan Mystery by Ron Franscell

When a world-renowned forensic anthropologist journeys to Winchester, Wyoming, to examine the long-dead remains of a woman who claimed to be Etta Place — the Old West’s most mysterious and legendary female outlaw — he’s not expecting to find a man’s headless corpse in her crypt. The grisly discovery plunges him and Jefferson Morgan — the editor of the weekly Winchester Bullet — into a shadowy and deadly world of satellite-savvy highway pirates, rural meth labs, computer hackers and old-fashioned corruption. And they might not survive the fall. In this sequel to his dynamic first novel, THE DEADLINE, bestselling author Franscell takes readers on another wild ride with protagonist Jefferson Morgan.

But it all happened too quickly. While the Burlington, Iowa, truck driver, a single father of four, slept in an empty interstate rest area just outside Spearfish, South Dakota, three men crept into his Peterbilt sleeper cab a little after 3 a.m. One of them, wielding a small sledge hammer, pounded a sharpened railroad spike through Pearly’s eye socket into his dreaming brain. He didn’t even have time to hurt.

But pain was inefficient, and these pirates were nothing if not cold-bloodedly efficient. They drove Pearly’s truck west into Wyoming. Beneath a highway overpass at a dark little border town called Beulah, they dumped Pearly’s still-warm body in the bed of a waiting pickup, which transported him to a secluded, lonely hole already custom-dug for him in the Wyoming prairie. Pearly would spend eternity in shallow, foreign earth far from his home and children, never found.

One hour later, right on schedule, they were met at a truck stop where three more men in rubber gloves swept the trailer for tracking devices; they found four, which were disarmed and dismantled on the spot, long before the truck or Pearly were ever missed. They also hacked into the QualComm satellite system from a laptop in their black van, and removed the tracking dish from the top of the rig. For anyone who cared, including the Feds, Pearly’s stolen truck was rendered invisible from the protective satellites overhead.

And Pearly’s load, a wide array of pharmaceuticals due to be dropped at a Wal-Mart warehouse in Minneapolis, Minnesota, was already sold. Broken up on the foreign and domestic black market, it would net more than three million dollars. The hijackers would eventually barter Pearly’s repainted Peterbilt for a stolen rail shipment of military weapons and explosives in Mobile, Alabama. The brown stain in the sleeper was said to be spilled battery acid, but even the truth wouldn’t have mattered much. In their world, battery acid was spilled everywhere.

And Pearly’s four fatherless kids, their mother long dead, would be scattered by Iowa’s overworked social services department to four different foster families, where they inevitably would come to hate the government for what it took from them.

All in all, it was a good night for the Fourth Sign.”

From the author: “I have always been fascinated with dead men’s tales. I had just read an account of the search for the graves of the infamous Wild West badmen Butch Cassidy and the Sundance Kid when I decided to weave a similar thread about outlaw queen Etta Place into THE OBITUARY. It’s a thoroughly modern thriller, but the crime history elements are fun and provide this beautiful counterpoint.”

It was a great show on Shattered Lives with LadyJustice Donna Gore and bestselling author Ron Franscell. They talked about Ron’s WildBluePress books THE DEADLINE and THE OBITUARY as well as his true crime masterpieces such as The Darkest Night. Listen to the show here.

You can order THE OBITUARY now by clicking the buttons below:

What Others Are Saying About THE OBITUARY

“A great job with a fresh, original idea. THE OBITUARY weaves elements of the best forensics writers at work today, as well as the best detective writers — a great mix. ” –MICHAEL PALMER, NYTimes bestselling author

“Ron Franscell takes us on a journey like a leaf in a stream — flowing from scene to scene, always something new around every corner, picking up speed as it heads to its inevitable conclusion. His skills as one of the country’s top narrative non-fiction writers and journalists makes his fiction realistic and edgy, while his flair for suspense and drama keeps us turning the pages, then wanting more when finished.” –STEVE JACKSON, NYTimes bestselling author of MONSTER and NO STONE UNTURNED

Due to Sullivan’s extensive writing about Ted Bundy (which has produced six books), he’s become a sort of magnet over the years, drawing out many people who were part of the Bundy story, but have otherwise kept a low profile over the decades; and … END_OF_DOCUMENT_TOKEN_TO_BE_REPLACED

Volume One The Early Years In 1944 Brooklyn, newborn Michael J. Hardy is rejected by his mother so she can run with gangster Bugsy Siegel, Hardy’s godfather. Shirley Rook rose to the top of the criminal ranks. As the Queen of New York City … END_OF_DOCUMENT_TOKEN_TO_BE_REPLACED

This is the true story of Carmine Imbriale – a gambler, a brawler, a bandit, a bookie, an enforcer. For two decades, Imbriale was a street-level operative in one of the most violent crews in the Colombo Family, and he endeared himself to some of the … END_OF_DOCUMENT_TOKEN_TO_BE_REPLACED

Ten must track down and stop rogue scientists behind the development of criminal technology in THE HUMANZEEE EXPERIMENTS, the next installment of The 'Ten' Mystery Series! The International Security for Technological Innovations, a federal … END_OF_DOCUMENT_TOKEN_TO_BE_REPLACED

A 1986 family tragedy propels this gripping true crime debut as a mother searches for answers in the shocking murder of her husband—and conviction of her son. For years, Cherie struggles to overcome the consuming grief she suffers from the loss of … END_OF_DOCUMENT_TOKEN_TO_BE_REPLACED

It was a dreary winter afternoon in Ayer, Massachusetts, a quintessential New England town, the type which is romanticized in Robert Frost's poems. But on January 30, 1979, a woman’s scream was heard piercing the northeast tempest wind. In an … END_OF_DOCUMENT_TOKEN_TO_BE_REPLACED