Every generation has its bogeyman.

Before 1969, maybe it was Adolf Hitler. After 2001, Osama bin Laden. But for those 30 or so years in between it was unquestionably an aspiring musician, deeply damaged outlaw, and hippie Svengali named Charles Manson.

On two nights in the summer of 1969—the same summer as Woodstock—Manson rose from nobody to America’s most fearsome monster.

Born in Ohio to an unwed, 15-year- old girl, Manson’s childhood was poor and troubled, to say the least. When he was five, his mom went to prison for armed robbery. Although he was smart, he never learned to read or write well, so he dropped out of third grade. By age 13, Charlie was doing his own armed robberies and his recently paroled mother reportedly sold him for a bottle of vodka.

The kid grew accustomed to life in brutal reformatories where he spent much of his youth. He became skilled at rape, contraband, and manipulation. He began to grasp the power that acting crazy had over people. 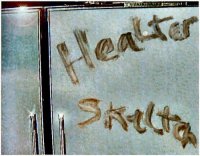 As an adult, he indulged his most primitive urges, too. He married and moved to California, but didn’t want to work. When his wife got pregnant, Charlie got serious about his responsibility: He became a pimp and part-time thief to pay the bills. Busted for forging a US Treasury check, Manson went to prison for six years and was released in 1967, just in time for the “summer of love,” when social, racial, and political turbulence had knocked loose a million rootless kids, all looking for meaning. Or something. Or anything.

Fate had dropped the utterly wrong man into the utterly wrong place and moment in time. He brilliantly exploited sex, drugs, and rock ’n’ roll—and rampant disaffection with the mainstream—to his own narcissistic ends. He recast himself as a crazy charmer, a cosmic seducer, a pusher of consciousness, a freak-riffing messiah who spoke in wacky riddles. He was Canoga Park Jesus, and his disciples were a ragged, dirty band of alienated hippie kids.

We know what happened in August 1969. Those bloody nights transformed a young, pregnant actress named Sharon Tate into America’s most famous mass-murder victim, more famous than she’d gotten in her recent role in the movie Valley of the Dolls. They scared the bejeezus out of a million parents who feared that free love, acid, long hair, and rock music might be the Four Horsemen of the Apocalypse.

In these past five decades, more than 30 books, a dozen movies, at least one stage play, and countless songs have paid homage to Manson, as if he were some underdog folk-hero. He is ad-libbing a cautionary tale about sex, drugs, mind-control, religion, celebrity, rock ‘n’ roll … and just how little control we have over any of it. He remains the perfect reality TV star in the greatest drama of all: life and death. 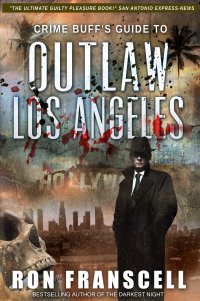 Oh, we’ve seen other charming and persuasive psychopaths, but none held a mirror up to us like Manson. In this little troll, we saw (and still see) the darkest side of what’s possible when we veer off the path—especially those of us who are young, suburban women from good homes.

Manson’s enigma keeps him alive in our consciousness and, to a certain degree, in our prison. His ambiguity and his uncanny freak-riffing fascinate us. Until he has literally taken his last breath, the bogeyman will have the last laugh.

A sunset cruise through a place where ordinary inhumanities are entertainment... Los Angeles is where America’s dreams and nightmares got all tangled up. In this otherworldly place of seemingly everlasting life, death could have an otherworldly … END_OF_DOCUMENT_TOKEN_TO_BE_REPLACED

"The ultimate guilty pleasure book!" - San Antonio Express News The line between history and mythology is razor thin—and the American Southwest often erases the line altogether. We might never disentangle crime-fact from fiction, but this book will … END_OF_DOCUMENT_TOKEN_TO_BE_REPLACED

The Adventures of Newspaperman Jefferson Morgan Continue With Another Scintillating Mystery Set In Wyoming When a world-renowned forensic anthropologist journeys to Winchester, Wyoming, to examine the long-dead remains of a woman who claimed to … END_OF_DOCUMENT_TOKEN_TO_BE_REPLACED

A dying convict's last request thrusts small-town newspaperman Jefferson Morgan into a deadly maelstrom as he explores a fifty-year-old case of child murder -- a wound his town still isn't ready to scrape open. Under the heaviest deadline of his … END_OF_DOCUMENT_TOKEN_TO_BE_REPLACED

Soon To Be A Documentary Series! My name is Suzanne Buchanan. There is an active arrest warrant for me in Thailand for articles I published on "The Backpacker Murders" as the former owner and editor of the Samui Times. I am a British citizen … END_OF_DOCUMENT_TOKEN_TO_BE_REPLACED

Coming January 29th to REELZChannel™! The DEADLY ASSOCIATES documentary! Step into Chicago during the 1960s and ‘70s, where mobsters influence everyone from strip-club owners to Teamsters, aldermen, judges, and local police. It is a world where … END_OF_DOCUMENT_TOKEN_TO_BE_REPLACED

"Lizzette Martinez’s story embodies the fire energy that gives light and life to survivors all around her! Survivors need to see strength and perseverance despite opposition, and Lizzette models just that." - Melissa Schuman, actress and singer In … END_OF_DOCUMENT_TOKEN_TO_BE_REPLACED

Step inside the death chamber and behind the walls of Ohio’s death row. Bill Kimberlin, Psy.D, invites the reader on an extensive and unbiased journey inside Ohio’s death row in WATCH ME DIE: Last Words From Death Row. You will see how these … END_OF_DOCUMENT_TOKEN_TO_BE_REPLACED

"The wheels of justice turn slowly, but grind exceedingly fine." Renee Fehr knew that Gregory Houser killed her sister Sheryl. There was not a single doubt in her mind. Yet for 27 years Houser walked free. But Renee wouldn’t rest … END_OF_DOCUMENT_TOKEN_TO_BE_REPLACED

On the early morning of March 6, 1993, an intense fire broke out in a tiny nursery. Sixteen minutes later, firefighters had extinguished the blaze, only to reveal a room burned so severely, everything was virtually unrecognizable. Then, they were … END_OF_DOCUMENT_TOKEN_TO_BE_REPLACED

During the early morning hours of July 17, 1983, fatigue became a factor for the young couple from central Illinois who spent their day under the hot sun at Marriott’s Great America amusement park north of Chicago. On their drive home, the tired … END_OF_DOCUMENT_TOKEN_TO_BE_REPLACED

Some Cases You Solve. Some Cases You Survive. Naval Criminal Investigative Service Special Agent, Tyrone Benhoff is in purgatory. That’s what agents call it when they find themselves on the wrong side of command and are transferred to a place … END_OF_DOCUMENT_TOKEN_TO_BE_REPLACED

New from award-winning author Terry Persun! After the murder of his wife and unborn child, the only time freelance tech investigator Ten feels alive is when he cuts himself. For the last few years, he has taken freelance investigative jobs. Some of … END_OF_DOCUMENT_TOKEN_TO_BE_REPLACED

Coming January 29th to REELZChannel™! The DEADLY ASSOCIATES documentary! Step into Chicago during the 1960s and ‘70s, where mobsters influence everyone from strip-club owners to Teamsters, aldermen, judges, and local police. It is a world where … END_OF_DOCUMENT_TOKEN_TO_BE_REPLACED

"Lizzette Martinez’s story embodies the fire energy that gives light and life to survivors all around her! Survivors need to see strength and perseverance despite opposition, and Lizzette models just that." - Melissa Schuman, actress and singer In … END_OF_DOCUMENT_TOKEN_TO_BE_REPLACED

Soon To Be A Documentary Series! My name is Suzanne Buchanan. There is an active arrest warrant for me in Thailand for articles I published on "The Backpacker Murders" as the former owner and editor of the Samui Times. I am a British citizen … END_OF_DOCUMENT_TOKEN_TO_BE_REPLACED

In this true crime-flavored novel, Detective William Boyett is called out on Mardi Gras evening in Mobile, Alabama to investigate the discovery of a young woman’s body wrapped in a carpet in a vacant lot a few blocks from the parade route. Over … END_OF_DOCUMENT_TOKEN_TO_BE_REPLACED