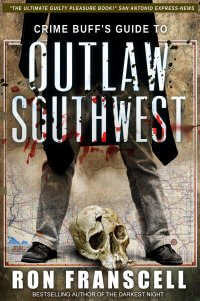 The line between history and mythology is razor thin—and the American Southwest often erases the line altogether. We might never disentangle crime-fact from fiction, but this book will transport you to Billy the Kid’s real-life stomping grounds, legendary Tombstone, the childhood home of one of the worst al Qaeda terrorists, and the scenes of dozens of crimes throughout Arizona and New Mexico’s history.

OUTLAW SOUTHWEST continues the series that critics, true-crime fans, historians, and travelers have hailed as “thorough and unflinching” and “the best damn crime travel series ever published!” Dozens of fascinating stories in OUTLAW SOUTHWEST are told in the same fast-paced, enthralling voice that’s made Ron Franscell one of America’s most beloved crime writers… and the Crime Buff’s Guides™ a three-time winner of TrueCrimeZine.com’s Book of the Year!

Like all the other books in the Crime Buff’s Guide™ series, OUTLAW SOUTHWEST was a labor love. Love for history. Love for travel. Love for storytelling. Between the deeper, darker books I write, these popular Crime Buff’s Guides™ transported me away to paces, events, times, and people with whom I spent a moment, then moved on.

This book will transport you, too. To the scene of one of the bloodiest prison riots in American history, the site of a town so evil it had to die, the compound of a polygamist cult leader who continues to rule his followers from prison, and the exact location of a post-war UFO hoax that bilked ordinary people out of their savings. It will point the way to spots where infamous crime figures—John Dillinger, Doc Holliday, Billy the Kid, Bonnie & Clyde, and Wyatt Earp, among others—once stood. It will take you to the many places in our Wildest West where ordinarily law-abiding people finally grew impatient with justice and took the law into their own hands. 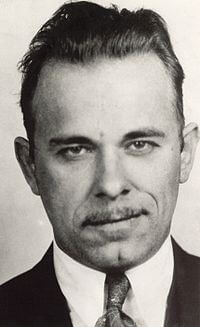 The confessed killer of Sheriff Pat Garrett was acquitted of murder in one of the most rigged jury trials in American history?

Bank robber John Dillinger and his gang were arrested in Tucson after a freak fire forced them out of their downtown hotel hideout?

One of the world’s most dangerous al Qaeda recruiters was born in Las Cruces, NM?

“It’s a breezy, guilty-pleasure read—perfect for summer vacations because you can put it down and pick it up without losing your place (but you won’t want to put it down). For those of who week true-crime stories, it’s a fascinating look at the dark side.” — TUCSON (AZ) SENTINEL

“Well researched… Armchair detectives will enjoy the tales, but the book’s purpose is to take the reader to the scene of the crime.” — ALBUQUERQUE JOURNAL

A sunset cruise through a place where ordinary inhumanities are entertainment... Los Angeles is where America’s dreams and nightmares got all tangled up. In this otherworldly place of seemingly everlasting life, death could have an otherworldly … END_OF_DOCUMENT_TOKEN_TO_BE_REPLACED

"The ultimate guilty pleasure book!" - San Antonio Express News The line between history and mythology is razor thin—and the American Southwest often erases the line altogether. We might never disentangle crime-fact from fiction, but this book will … END_OF_DOCUMENT_TOKEN_TO_BE_REPLACED

The Adventures of Newspaperman Jefferson Morgan Continue With Another Scintillating Mystery Set In Wyoming When a world-renowned forensic anthropologist journeys to Winchester, Wyoming, to examine the long-dead remains of a woman who claimed to … END_OF_DOCUMENT_TOKEN_TO_BE_REPLACED

A dying convict's last request thrusts small-town newspaperman Jefferson Morgan into a deadly maelstrom as he explores a fifty-year-old case of child murder -- a wound his town still isn't ready to scrape open. Under the heaviest deadline of his … END_OF_DOCUMENT_TOKEN_TO_BE_REPLACED

Soon To Be A Documentary Series! My name is Suzanne Buchanan. There is an active arrest warrant for me in Thailand for articles I published on "The Backpacker Murders" as the former owner and editor of the Samui Times. I am a British citizen … END_OF_DOCUMENT_TOKEN_TO_BE_REPLACED

Coming January 29th to REELZChannel™! The DEADLY ASSOCIATES documentary! Step into Chicago during the 1960s and ‘70s, where mobsters influence everyone from strip-club owners to Teamsters, aldermen, judges, and local police. It is a world where … END_OF_DOCUMENT_TOKEN_TO_BE_REPLACED

"Lizzette Martinez’s story embodies the fire energy that gives light and life to survivors all around her! Survivors need to see strength and perseverance despite opposition, and Lizzette models just that." - Melissa Schuman, actress and singer In … END_OF_DOCUMENT_TOKEN_TO_BE_REPLACED

Step inside the death chamber and behind the walls of Ohio’s death row. Bill Kimberlin, Psy.D, invites the reader on an extensive and unbiased journey inside Ohio’s death row in WATCH ME DIE: Last Words From Death Row. You will see how these … END_OF_DOCUMENT_TOKEN_TO_BE_REPLACED

"The wheels of justice turn slowly, but grind exceedingly fine." Renee Fehr knew that Gregory Houser killed her sister Sheryl. There was not a single doubt in her mind. Yet for 27 years Houser walked free. But Renee wouldn’t rest … END_OF_DOCUMENT_TOKEN_TO_BE_REPLACED

On the early morning of March 6, 1993, an intense fire broke out in a tiny nursery. Sixteen minutes later, firefighters had extinguished the blaze, only to reveal a room burned so severely, everything was virtually unrecognizable. Then, they were … END_OF_DOCUMENT_TOKEN_TO_BE_REPLACED

During the early morning hours of July 17, 1983, fatigue became a factor for the young couple from central Illinois who spent their day under the hot sun at Marriott’s Great America amusement park north of Chicago. On their drive home, the tired … END_OF_DOCUMENT_TOKEN_TO_BE_REPLACED

Some Cases You Solve. Some Cases You Survive. Naval Criminal Investigative Service Special Agent, Tyrone Benhoff is in purgatory. That’s what agents call it when they find themselves on the wrong side of command and are transferred to a place … END_OF_DOCUMENT_TOKEN_TO_BE_REPLACED

New from award-winning author Terry Persun! After the murder of his wife and unborn child, the only time freelance tech investigator Ten feels alive is when he cuts himself. For the last few years, he has taken freelance investigative jobs. Some of … END_OF_DOCUMENT_TOKEN_TO_BE_REPLACED

Coming January 29th to REELZChannel™! The DEADLY ASSOCIATES documentary! Step into Chicago during the 1960s and ‘70s, where mobsters influence everyone from strip-club owners to Teamsters, aldermen, judges, and local police. It is a world where … END_OF_DOCUMENT_TOKEN_TO_BE_REPLACED

"Lizzette Martinez’s story embodies the fire energy that gives light and life to survivors all around her! Survivors need to see strength and perseverance despite opposition, and Lizzette models just that." - Melissa Schuman, actress and singer In … END_OF_DOCUMENT_TOKEN_TO_BE_REPLACED

Soon To Be A Documentary Series! My name is Suzanne Buchanan. There is an active arrest warrant for me in Thailand for articles I published on "The Backpacker Murders" as the former owner and editor of the Samui Times. I am a British citizen … END_OF_DOCUMENT_TOKEN_TO_BE_REPLACED

In this true crime-flavored novel, Detective William Boyett is called out on Mardi Gras evening in Mobile, Alabama to investigate the discovery of a young woman’s body wrapped in a carpet in a vacant lot a few blocks from the parade route. Over … END_OF_DOCUMENT_TOKEN_TO_BE_REPLACED