Frank Rodriguez, a much-loved counselor of troubled teens, lies dead on the bedroom floor.  His wife and step-daughter are in shock, and so is

A Taste For Murder was featured on Investigation Discovery’s EPIC MYSTERIES show April 9, 2016

the medical examiner when he performs the autopsy.  Aside from being dead, Frank is in perfect health.

Demanding to know the cause of her husband’s death, Angie Rodriguez badgers the police, insisting that Frank was murdered.  The cops attribute her assertions to overwhelming grief, but soon they too believe that Frank didn’t die of natural causes.

Get A TASTE FOR MURDER
eBook

When the police enlist their number one suspect to help in the investigation, things spiral out of control until police are dealing with a daring plot to murder Angie’s best friend, and allegations of another homicide so evil and perverse that even seasoned L.A County Detectives are shocked beyond belief.

“You think you can put blood in a test tube and say `tell me what’s in it,` but that’s not how it works,” said Shafer. 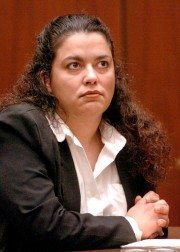 Angelina Rodriguez, 35, on trial for the murder of her husband, Frank, but did she really do it?

“The first tests came back positive for promethazine and other antihistamines, which was anticipated, but no cocaine, no stimulants, no heroin, no methadone, no marijuana or other drugs were present.” Acting on a hunch, a coroner’s team went back to Angie’s house in hopes of turning up something. They found some ant poison and other
insecticides. Frank’s blood was tested again. The results were negative. This death was becoming an endless source of frustration and suspicion.  No one dies without cause. Frank Rodriguez was too healthy to die, and without a cause, the coroner couldn’t issue a death certificate.
Frank, a prudent and responsible man, had life insurance with his beloved wife as beneficiary. Without a death certificate, however, the insurance company couldn’t settle the claim.“As soon as the medical examiner provides a death certificate, Mrs.Rodriguez,” the claims agent told Angie, “we will promptly send you a check. As much as we sympathize with your financial situation, we can’t do a thing until we have the death certificate.” Her financial situation was dismal simply because Frank’s paycheck stopped when his heart did likewise. This is precisely why couples buy life insurance, and Frank was, above all, a most responsible and caring husband who lovingly made sure that his wife would be taken care of in case something happened to him.

Acclaim for A TASTE FOR MURDER

“A true crime murder mystery that will leave you gasping for breath”  —Steve Jackson, New York Times bestselling author of BOGEYMAN and NO STONE UNTURNED

Frank Girardot and Burl Barer, the authors of A Taste For Murder

Frank C Girardot, Jr. Is an award-winning journalist, author and television commentator who recently resigned as senior editor for the Los Angeles News

Burl Barer and Frank Girardot Jr. discussed the book on Investigation Discovery EPIC MYSTERIES on April 9, 2016 Frank Rodriguez, a much-loved counselor of troubled teens, lies dead on the bedroom floor.  His wife and step-daughter are in

Due to Sullivan’s extensive writing about Ted Bundy (which has produced six books), he’s become a sort of magnet over the years, drawing out many people who were part of the Bundy story, but have otherwise kept a low profile over the decades; and … END_OF_DOCUMENT_TOKEN_TO_BE_REPLACED

Volume One The Early Years In 1944 Brooklyn, newborn Michael J. Hardy is rejected by his mother so she can run with gangster Bugsy Siegel, Hardy’s godfather. Shirley Rook rose to the top of the criminal ranks. As the Queen of New York City … END_OF_DOCUMENT_TOKEN_TO_BE_REPLACED

This is the true story of Carmine Imbriale – a gambler, a brawler, a bandit, a bookie, an enforcer. For two decades, Imbriale was a street-level operative in one of the most violent crews in the Colombo Family, and he endeared himself to some of the … END_OF_DOCUMENT_TOKEN_TO_BE_REPLACED

Ten must track down and stop rogue scientists behind the development of criminal technology in THE HUMANZEEE EXPERIMENTS, the next installment of The 'Ten' Mystery Series! The International Security for Technological Innovations, a federal … END_OF_DOCUMENT_TOKEN_TO_BE_REPLACED

A 1986 family tragedy propels this gripping true crime debut as a mother searches for answers in the shocking murder of her husband—and conviction of her son. For years, Cherie struggles to overcome the consuming grief she suffers from the loss of … END_OF_DOCUMENT_TOKEN_TO_BE_REPLACED

It was a dreary winter afternoon in Ayer, Massachusetts, a quintessential New England town, the type which is romanticized in Robert Frost's poems. But on January 30, 1979, a woman’s scream was heard piercing the northeast tempest wind. In an … END_OF_DOCUMENT_TOKEN_TO_BE_REPLACED