Phil Champagne, the main character in Man Overboard, is every bit the rascal at eighty four years of age as he was when he died in 1982 -of course, Phil didn’t know he was dead until he read it in the newspaper.

Those of you who were born in the 80’s or 90’s probably can’t imagine it being so easy to make fake drivers licenses with press on letters you buy at the stationary store, but back in the “old days” before there were holograms and other security devices on I.D., you could get away with that sort of thing – and Phil had his reinvention down to a science – even his fake $100 series E 1990 bills were, for the most part, good enough to make it all the way to the Federal Reserve Bank in Seattle before they were detected as counterfeit – well, except for that one accidently passed at Perkins Cake n Steak in Ritzville, Washington.

Some people still think that perhaps Phil’s vanishing act was a well-orchestrated insurance scam, and that the wild 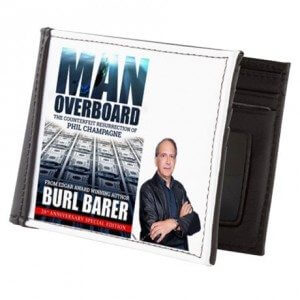 adventures detailed in the book are a pack of lies. If they are, the lies are well packaged and vastly entertaining. There is, according to the United States Secret Service, no doubt that Phil’s alias, Harold Richard Stegeman, was used world wide by international criminals and crooked politicians on the run. From South America to the Maldives Islands and Africa, Harold Richard Stegeman is a legend of international crime and mayhem – but a legend never apprehended…until they captured Phil Champagne.

Will there ever be a movie made of Man Overboard? Once again a well-known film director of high repute has expressed interest in the film rights. Nothing is real until the check clears the bank. But keep your fingers crossed just in case.

Due to Sullivan’s extensive writing about Ted Bundy (which has produced six books), he’s become a sort of magnet over the years, drawing out many people who were part of the Bundy story, but have otherwise kept a low profile over the decades; and … END_OF_DOCUMENT_TOKEN_TO_BE_REPLACED

Volume One The Early Years In 1944 Brooklyn, newborn Michael J. Hardy is rejected by his mother so she can run with gangster Bugsy Siegel, Hardy’s godfather. Shirley Rook rose to the top of the criminal ranks. As the Queen of New York City … END_OF_DOCUMENT_TOKEN_TO_BE_REPLACED

This is the true story of Carmine Imbriale – a gambler, a brawler, a bandit, a bookie, an enforcer. For two decades, Imbriale was a street-level operative in one of the most violent crews in the Colombo Family, and he endeared himself to some of the … END_OF_DOCUMENT_TOKEN_TO_BE_REPLACED

Ten must track down and stop rogue scientists behind the development of criminal technology in THE HUMANZEEE EXPERIMENTS, the next installment of The 'Ten' Mystery Series! The International Security for Technological Innovations, a federal … END_OF_DOCUMENT_TOKEN_TO_BE_REPLACED

It was a dreary winter afternoon in Ayer, Massachusetts, a quintessential New England town, the type which is romanticized in Robert Frost's poems. But on January 30, 1979, a woman’s scream was heard piercing the northeast tempest wind. In an … END_OF_DOCUMENT_TOKEN_TO_BE_REPLACED