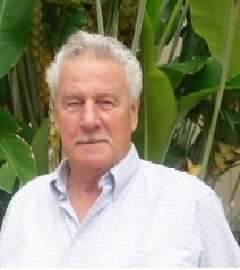 Author Burl Barer discusses his first meeting with the conman/counterfeiter that led to the writing of MAN OVERBOARD: The Counterfeit Resurrection of Phil Champagne

I wasn’t the first author to approach Mr. Champagne about a book, and the fact that he hadn’t said “yes” to any of them encouraged rather than discouraged me. I fired up my Volvo 1800E, aimed it at Spokane, and passed through security at Geiger Correctional Center wearing faded blue jeans and my black “Saint” logo sweatshirt.

I didn’t want to look like a lawyer, cop or reporter. I grabbed a cup of coffee in a Styrofoam cup, and joined the affable Mr. Champagne at an outside picnic table.

I laughed, swirled the coffee around in the little white cup, paused for a while, then turned to him, asking sotto voice, “Tell me, Phil, how good were the bills?”

Bingo. There is nothing more compelling than an invitation to share criminal pride.

“Hell, they made it all the way to the Federal Reserve Bank in Seattle,” says Phil proudly. “Not all were that good – like the one that got us busted at the pancake house in Ritzville.”

Ah, yes. The pancake house in Ritzville. There are more criminal arrests of people passing through Ritzville than you would imagine. For some reason, people transporting contraband of all types operate under the delusion that you can speed through Eastern Washington, and right through Ritzville, with some sort of traffic impunity.

The illusion of impunity leads to incarceration more often than not, and it is not the place to even inadvertently pass a bogus bill.

Phil and I talked criminal strategy, why he didn’t swap the bills in drug deals down on Sprague Avenue in the dark, and why he used the bills to buy fruit pie. Simple. A good fruit pie is a real treat, and you never hear of violent deaths attributed to “a pie deal gone bad.”

Click this link to download the transcript of the Secret Service interview with Phil Champagne after his “resurrection.”

Due to Sullivan’s extensive writing about Ted Bundy (which has produced six books), he’s become a sort of magnet over the years, drawing out many people who were part of the Bundy story, but have otherwise kept a low profile over the decades; and … END_OF_DOCUMENT_TOKEN_TO_BE_REPLACED

Volume One The Early Years In 1944 Brooklyn, newborn Michael J. Hardy is rejected by his mother so she can run with gangster Bugsy Siegel, Hardy’s godfather. Shirley Rook rose to the top of the criminal ranks. As the Queen of New York City … END_OF_DOCUMENT_TOKEN_TO_BE_REPLACED

This is the true story of Carmine Imbriale – a gambler, a brawler, a bandit, a bookie, an enforcer. For two decades, Imbriale was a street-level operative in one of the most violent crews in the Colombo Family, and he endeared himself to some of the … END_OF_DOCUMENT_TOKEN_TO_BE_REPLACED

Ten must track down and stop rogue scientists behind the development of criminal technology in THE HUMANZEEE EXPERIMENTS, the next installment of The 'Ten' Mystery Series! The International Security for Technological Innovations, a federal … END_OF_DOCUMENT_TOKEN_TO_BE_REPLACED

It was a dreary winter afternoon in Ayer, Massachusetts, a quintessential New England town, the type which is romanticized in Robert Frost's poems. But on January 30, 1979, a woman’s scream was heard piercing the northeast tempest wind. In an … END_OF_DOCUMENT_TOKEN_TO_BE_REPLACED