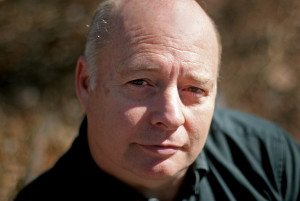 Ron grew up in Wyoming. A lifelong journalist, he worked for newspapers in Wyoming, New Mexico and California’s Bay Area before hitting the road in one of American journalism’s best beats, covering the evolution of the American West as a senior writer for the Denver Post. Shortly after 9/11, he was dispatched by the Post to cover the Middle East during the first few months of the Afghan war. In 2004, he became the managing editor for the Beaumont (TX) Enterprise, where he covered the devastation of Hurricane Rita from inside the storm. He now lives in San Antonio, Texas.

His book reviews and essays are regularly published in many of America’s biggest and best newspapers, such as the Washington Post, Chicago Sun-Times, San Francisco Chronicle, Denver Post, San Jose Mercury-News, St. Louis Post-Dispatch, Milwaukee Journal-Sentinel and others. He has been a guest on CNN, Fox News, NPR, the Today Show, ABC News, and other major broadcast outlets all over America. And he appears regularly on crime documentaries at Investigation Discovery, History Channel, and A&E.

On May 17, St. Martin’s Press will release MORGUE: A LIFE IN DEATH, which Ron co-authored with renowned medical examiner Dr. Vincent Di Maio. It explores the most historic, infamous, and heartbreaking cases of Dr. Di Maio, one of the world’s lions of forensic medicine. From the exhumation of Lee Harvey Oswald and the racially charged shooting of Florida teen Trayvon Martin, to the unmasking of a serial baby-killer and the mysterious death of troubled genius Vincent van Gogh. Along the way, one of the country’s most methodical and intuitive criminal pathologists will dissect himself, maintaining a nearly continuous flow of suspenseful stories, revealing anecdotes, and enough macabre insider details to rivet the most fervent crime fans. It’s already been hailed as a “tour de force” and “crime masterpiece” by a brilliant array of people you know, from the late Vincent Bugliosi and Dr. Michael Baden to crime-writer Gregg Olsen and actor David McCallum. It’s also earned starred reviews at Booklist and Publisher’s Weekly.

And THE DARKEST NIGHT (also titled FALL in a 2007 hardcover) continues to be a bestselling true crime. This intensely personal nonfiction about a monstrous crime that touched his life as a child has been hailed by authors such as Ann Rule and Vincent Bugliosi, as well as critics, as a direct literary descendant of Truman Capote’s “In Cold Blood.”

Ron’s debut novel, ANGEL FIRE, was published by Laughing Owl in 1998, and reprinted by Berkley (Penguin/Putnam) in 2000. Soon after, it was listed by the San Francisco Chronicle among the 100 Best Novels of the 20th Century West (No. 74, in fact).

His popular mystery, THE DEADLINE, was published in 1999, followed by a sequel, THE OBITUARY. Both are now WildBlue Press titles. 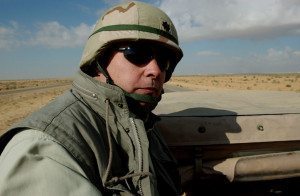 While reporting for the Denver Post, Ron Franscell was dispatched to the Middle East to write about the early days of the War on Terror

DELIVERED FROM EVIL (2011) explores the entangled lives of mass-murderers and their victims, tracing the lives of 10 ordinary people who survived some of America’s worst massacres. Auspiciously, it debuted on the day a deranged young gunman killed six and wounded 13 at a Tucson supermarket in one of the most shocking crimes of our day.

Author Ron Franscell just before he drank a cocktail containing this mummified human toe, the quest of his father-and-son road book, “The Sourtoe Cocktail Club.”

THE SOURTOE COCKTAIL CLUB is a significant departure from true crime. It’s an intimate account of Ron’s extraordinary road trip to the Yukon with his son, where they drank a cocktail containing a mummified human toe and spent the longest day of the year under an Arctic sun that never set. Magical. But it’s also an intimate exploration of what it means to be a father and a son. Praised by legendary authors such as W.P. Kinsella, Ivan Doig, William Least Heat Moon and others, SOURTOE moves road memoirs a little farther on their journey.

A sunset cruise through a place where ordinary inhumanities are entertainment... Los Angeles is where America’s dreams and nightmares got all tangled up. In this otherworldly place of seemingly everlasting life, death could have an otherworldly … END_OF_DOCUMENT_TOKEN_TO_BE_REPLACED

"The ultimate guilty pleasure book!" - San Antonio Express News The line between history and mythology is razor thin—and the American Southwest often erases the line altogether. We might never disentangle crime-fact from fiction, but this book will … END_OF_DOCUMENT_TOKEN_TO_BE_REPLACED

The Adventures of Newspaperman Jefferson Morgan Continue With Another Scintillating Mystery Set In Wyoming When a world-renowned forensic anthropologist journeys to Winchester, Wyoming, to examine the long-dead remains of a woman who claimed to … END_OF_DOCUMENT_TOKEN_TO_BE_REPLACED

A dying convict's last request thrusts small-town newspaperman Jefferson Morgan into a deadly maelstrom as he explores a fifty-year-old case of child murder -- a wound his town still isn't ready to scrape open. Under the heaviest deadline of his … END_OF_DOCUMENT_TOKEN_TO_BE_REPLACED

Some Cases You Solve. Some Cases You Survive. Naval Criminal Investigative Service Special Agent, Tyrone Benhoff is in purgatory. That’s what agents call it when they find themselves on the wrong side of command and are transferred to a place … END_OF_DOCUMENT_TOKEN_TO_BE_REPLACED

New from award-winning author Terry Persun! After the murder of his wife and unborn child, the only time freelance tech investigator Ten feels alive is when he cuts himself. For the last few years, he has taken freelance investigative jobs. Some of … END_OF_DOCUMENT_TOKEN_TO_BE_REPLACED

Coming January 29th to REELZChannel™! The DEADLY ASSOCIATES documentary! Step into Chicago during the 1960s and ‘70s, where mobsters influence everyone from strip-club owners to Teamsters, aldermen, judges, and local police. It is a world where … END_OF_DOCUMENT_TOKEN_TO_BE_REPLACED

"Lizzette Martinez’s story embodies the fire energy that gives light and life to survivors all around her! Survivors need to see strength and perseverance despite opposition, and Lizzette models just that." - Melissa Schuman, actress and singer In … END_OF_DOCUMENT_TOKEN_TO_BE_REPLACED

Soon To Be A Documentary Series! My name is Suzanne Buchanan. There is an active arrest warrant for me in Thailand for articles I published on "The Backpacker Murders" as the former owner and editor of the Samui Times. I am a British citizen … END_OF_DOCUMENT_TOKEN_TO_BE_REPLACED

In this true crime-flavored novel, Detective William Boyett is called out on Mardi Gras evening in Mobile, Alabama to investigate the discovery of a young woman’s body wrapped in a carpet in a vacant lot a few blocks from the parade route. Over … END_OF_DOCUMENT_TOKEN_TO_BE_REPLACED