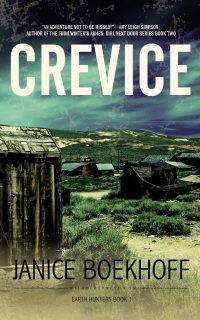 I’ve heard many writers say that setting is just the place where your story happens. In a literal sense, this is true. Every character I dream up needs a place to lay their head at night, a place to fight for, and a place to fight with other people. But I’ve always thought setting should do more than provide a bed (or as in many of my novels, a sleeping bag) for my characters.

I wrote the first several drafts of Crevice before visiting the Superstition Mountains in Arizona where the novel is set. Risky, I know. There’s always the danger that a major plot point won’t work once you’ve seen the setting for yourself (this happened to me once before, and it stinks to have to rewrite), but thankfully, I found no plot issues on this research trip.

The one thing I did have trouble imagining is the scale of the mountains. Looking at something on a map is nowhere close to seeing it in person. On paper, everything appears smaller, and the terrain seems easily traversed. 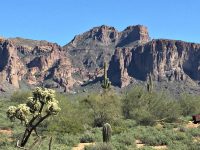 I was especially fooled by this illusion in the Superstitions, where a small shift on the map can make a difference of hundreds of feet in elevation. Climbing the peaks in this area is a dangerous endeavor due to the pronounced and uneven weathering of the rock. My characters had to contend with that, but fortunately I didn’t. I am definitely not a rock climber (fear of heights).

I was also misled by what people in Arizona consider a road. What was marked as Hewitt Canyon Road wouldn’t have passed for a driveway, even in rural Iowa. My husband drove our rented SUV down the pitted, rock-strewn road, bottoming out several times on the way to the trailhead. It took us over an hour to drive those 11 miles. And that was just to get us to the place where we could start hiking.

Once we couldn’t drive any more, we hiked down an unmaintained road (yes, the other one actually was maintained to a certain degree, we saw a grader scraping boulders off the road one day). The unmaintained road was a pathetic thing, like a wounded animal waiting to die while its insides trailed further down the cliff with each rainstorm. It had gotten so rutted only ATVs could drive on it. At the end of that road, we followed the Millsite Canyon trail alongside a creek for several hours before coming to the base of the mountains where much of the action in the book takes place. 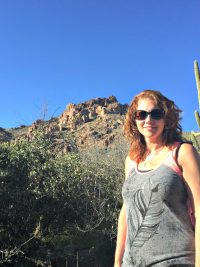 The scale of the mountains is hard to describe. Rocky cliffs of granite with a pinkish-orange hue rise three thousand feet from the valley floor. Below the rocks, about halfway down the mountains, weathered bits of quartz and feldspar litter the ground creating a slippery slope for anyone daring enough to brave the climb (not us). As the slopes gradually become less steep, the cactus takes over.

Many different varieties of cactus line the crumbling slopes, from cactus with paddle-board branches to tall saguaro, and everything in between. One even resembled a small tree, and if you ever see one, I wouldn’t suggest touching any of its “leaves.”

Walking off the trail and through the thick patches of spiny bushes would have required weaving and dodging in between the plants, like navigating a corn maze. This is when setting becomes its own character…

Author adds to her “research” by hugging a cactus.

When setting forces your protagonist to deal with events differently.

When setting hurtles obstacles at your characters.

When setting pushes the story forward.

Crevice could not have taken place on any rugged mountain range. The unique geological features in the Superstition Mountains make them remote, even though the city of Phoenix is only fifteen miles away. These are true desert mountains, capable of pushing my characters’ endurance and persistence to the breaking point. And this makes the land under my character’s feet both stable and unstable at the same time.

Setting is truly a character when it not only enhances the story, it effects change in the story.

Often I write about fear. I think it’s one of the most universal human emotions. Fear helps us to learn vital lessons like don’t touch the stove when it’s hot or don’t run a red light because you’ll probably cause an accident. But fear can easily … END_OF_DOCUMENT_TOKEN_TO_BE_REPLACED

After his sister’s death sends him into the loving arms of God, Paleontology Professor Travis Perego fights to reconcile the career he’s devoted his life to with his fragile new faith. His struggle between evolutionary theory and the Bible soon … END_OF_DOCUMENT_TOKEN_TO_BE_REPLACED 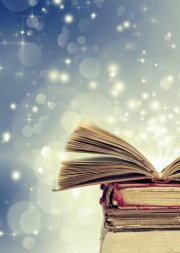 Do you think us writers are just a little bit weird? You wouldn’t be the first. We spend hours behind a keyboard figuring out how best to torture dozens of people who don’t actually exist. It’s no wonder that many writers turn to alcohol to cope with … END_OF_DOCUMENT_TOKEN_TO_BE_REPLACED 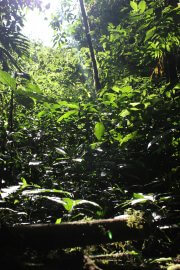 One of the biggest perks an author gets is visiting the location where a novel is set. For Book Two in the Earth Hunters series, Created, I had to hunt for the perfect location. The plot required several special conditions for the setting: … END_OF_DOCUMENT_TOKEN_TO_BE_REPLACED

When people find out I’m an author, I get two reactions. One: “Wow, that’s great!” Followed by many questions of what and how I write. Two: “Oh.” Followed by a subtle eye roll and somewhat condescending questions about how easy it must be to … END_OF_DOCUMENT_TOKEN_TO_BE_REPLACED

Due to Sullivan’s extensive writing about Ted Bundy (which has produced six books), he’s become a sort of magnet over the years, drawing out many people who were part of the Bundy story, but have otherwise kept a low profile over the decades; and … END_OF_DOCUMENT_TOKEN_TO_BE_REPLACED

Volume One The Early Years In 1944 Brooklyn, newborn Michael J. Hardy is rejected by his mother so she can run with gangster Bugsy Siegel, Hardy’s godfather. Shirley Rook rose to the top of the criminal ranks. As the Queen of New York City … END_OF_DOCUMENT_TOKEN_TO_BE_REPLACED

This is the true story of Carmine Imbriale – a gambler, a brawler, a bandit, a bookie, an enforcer. For two decades, Imbriale was a street-level operative in one of the most violent crews in the Colombo Family, and he endeared himself to some of the … END_OF_DOCUMENT_TOKEN_TO_BE_REPLACED

Ten must track down and stop rogue scientists behind the development of criminal technology in THE HUMANZEEE EXPERIMENTS, the next installment of The 'Ten' Mystery Series! The International Security for Technological Innovations, a federal … END_OF_DOCUMENT_TOKEN_TO_BE_REPLACED

A 1986 family tragedy propels this gripping true crime debut as a mother searches for answers in the shocking murder of her husband—and conviction of her son. For years, Cherie struggles to overcome the consuming grief she suffers from the loss of … END_OF_DOCUMENT_TOKEN_TO_BE_REPLACED

It was a dreary winter afternoon in Ayer, Massachusetts, a quintessential New England town, the type which is romanticized in Robert Frost's poems. But on January 30, 1979, a woman’s scream was heard piercing the northeast tempest wind. In an … END_OF_DOCUMENT_TOKEN_TO_BE_REPLACED