Marty Croft has it all. A beautiful wife, and a successful career as a commercial artist. That is until his past comes back to haunt him. Enter Gordon Shamus, the psychotic son of Marty’s former gangster boss. After Marty’s wife is kidnapped, he finds himself forced back into a world he left behind. The job seems simple enough. Drive the world’s longest ice road and retrieve a package of stolen diamonds. But what will become of Marty and his wife when the job is done? Will they be disposed of as potential witnesses?

In a twist of fate, the Acadia Diamond mine, located 200 kilometers below the arctic circle, has found something buried in the ice. A portal not of this world, and it is about to be unlocked by unsuspecting scientists. Once opened, the creatures, known as Skentophyte, attack.

Overrun by thousands of mind-controlling aliens, what started out as heist becomes a war for survival. In an ensemble cast of characters, the Acadia mine has become the beachhead of an all-out invasion. Detoured into a fight for survival, Marty finds himself in the company of men thrust into a mission to stop the invading force. Can they stop the creatures before they reach the city of Yellowknife? Will they survive against overwhelming odds? And what of Marty’s wife, Maggie? Will she become collateral damage if Marty can’t make it back in time to rescue her from the clutches of a maniac.

“MJ Preston creates an epic page-turner, with Canada’s frozen north as the setting and the Earth as the ultimate prize for whichever side wins the war.” –Gregory L. Norris, screenwriter for Star Trek Voyager

The lights of the snowcat bounced up in down in the morning light, tracks click-clacking on the ice, powder kicking up into the air. Behind it, two more vehicles, a plow and a grader, cleared the road. Lenny only saw the headlights, he never saw the creatures riding on the vehicles, but Chase saw them, and he scrambled back down into the trench.

The snowcat came to a stop.

In front of them, a little man waved his arms frantically.

The door on the snowcat popped open and out stepped Herb Aronson. “Lenny?”

Lenny realized his mistake. Saw them climbing down off the vehicles. Saw the caverns where Herb’s eyes had been. He didn’t turn his head to see where Chase was, although he tried to catch a glimpse of him from the corner of his eye. There were five hanging off the plow, all of them now dismounting onto the road. The grader moved up beside the snowcat, its massive lights drowning out the shadows and washing Lenny in amber milk.

The creatures were surrounding him now.

Chase covered his mouth in horror.

“We’ve been looking for you, Lenny.”

Lenny reached under his parka, unsheathed his knife.

“He froze to death. On the Telegraph.”

They were closing in. Lenny could hear the clacking of teeth.

Herb looked around. He did not follow Lenny’s tracks or see the building obscured by the darkness outside the circle of light they stood in. The winds were still up, polishing the surface of the snow, extinguishing his tracks. Lenny hoped there would be enough time to erase them permanently.

Herb turned his head, but Lenny, hoping to distract him, spoke up. “Herb.”

“Yes, Lenny?” Herb turned his attention back to Lenny.

They were all around him now, no escape.

Herb grinned. “A little, but not for long.”

Lenny brought the knife up.

“What are you doing, Lenny?”

In one smooth motion, he cut his own throat. There was a sting, sticky warmth, his knees buckled.

Better run like hell, Chase, was his last thought. He was dead before they dismantled him.

It's always a good day for free audiobooks! That's right! Free audiobooks! Just a gift from us to you, our readers.   Browse by genre and select the cover to get more information and your free copy! Non-Fiction True Crime Business … END_OF_DOCUMENT_TOKEN_TO_BE_REPLACED

We know how hard 2020 has been. To help you end the year on a better note, we wanted to give you the gift of free audiobooks! Hence, the Holiday 2020 Audiobook Giveaway! You're probably thinking of gifts for others right now, like we always do during … END_OF_DOCUMENT_TOKEN_TO_BE_REPLACED

Having abstained from killing for almost a year, the Highwayman is coming unglued. Unsure if the FBI is watching, Lance Belanger spends his days and nights in a paranoid malaise, longing to kill again. Meanwhile, in Bucharest, Romania, an … END_OF_DOCUMENT_TOKEN_TO_BE_REPLACED 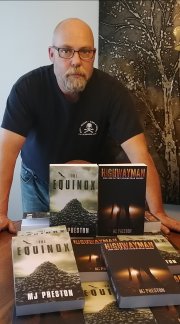 PART I – THE MONSTERS WHO WALK AMONG US I have always had an interest in true-crime and the enigma of serial murder. In writing, I often find myself drawn to the serial killer as the definitive monster. Mostly, because they’re real, which makes … END_OF_DOCUMENT_TOKEN_TO_BE_REPLACED

Marty Croft has it all. A beautiful wife, and a successful career as a commercial artist. That is until his past comes back to haunt him. Enter Gordon Shamus, the psychotic son of Marty’s former gangster boss. After Marty’s wife is kidnapped, he … END_OF_DOCUMENT_TOKEN_TO_BE_REPLACED 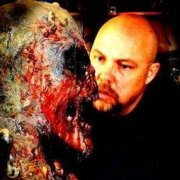 My first novel, THE EQUINOX, garnered a lot of love. People love monsters, and I believed, when I wrote it, that they were worn out on vampires and zombies. So, I wanted to write something beyond the usual trends. In retrospect, I might have to … END_OF_DOCUMENT_TOKEN_TO_BE_REPLACED

It has existed for centuries. A dark curse held captive by an ancient ritual, a creature of insatiable hunger possessing the ability to change shape at will. During the spring and fall equinox it would break through the walls, separating our … END_OF_DOCUMENT_TOKEN_TO_BE_REPLACED

Hello there, Being the new kid on the block, I thought I’d tell you a bit about myself. I am what could be categorized as a horror/science fiction/thriller author. I have always had a fascination with the darker side of humanity, and I suppose … END_OF_DOCUMENT_TOKEN_TO_BE_REPLACED

Having abstained from killing for almost a year, the Highwayman is coming unglued. Unsure if the FBI is watching, Lance Belanger spends his days and nights in a paranoid malaise, longing to kill again. Meanwhile, in Bucharest, Romania, an … END_OF_DOCUMENT_TOKEN_TO_BE_REPLACED

Marty Croft has it all. A beautiful wife, and a successful career as a commercial artist. That is until his past comes back to haunt him. Enter Gordon Shamus, the psychotic son of Marty’s former gangster boss. After Marty’s wife is kidnapped, he … END_OF_DOCUMENT_TOKEN_TO_BE_REPLACED

A Finalist in the Horror Category of the 2020 Next Generation Indie Book Awards! In a world terribly altered by a mysterious, year-long phenomenon dubbed the Great Darkness by some, the Dark Rapture by others, Vincent Alexander, a serial killer … END_OF_DOCUMENT_TOKEN_TO_BE_REPLACED

It has existed for centuries. A dark curse held captive by an ancient ritual, a creature of insatiable hunger possessing the ability to change shape at will. During the spring and fall equinox it would break through the walls, separating our … END_OF_DOCUMENT_TOKEN_TO_BE_REPLACED

The most terrifying monsters are real and walk among us every day. Meet Lance Belanger, he has only one ambition, to be the most infamous killer of all time. After murdering a single mom and her toddler child, Lance indoctrinates himself into the … END_OF_DOCUMENT_TOKEN_TO_BE_REPLACED

Due to Sullivan’s extensive writing about Ted Bundy (which has produced six books), he’s become a sort of magnet over the years, drawing out many people who were part of the Bundy story, but have otherwise kept a low profile over the decades; and … END_OF_DOCUMENT_TOKEN_TO_BE_REPLACED

Volume One The Early Years In 1944 Brooklyn, newborn Michael J. Hardy is rejected by his mother so she can run with gangster Bugsy Siegel, Hardy’s godfather. Shirley Rook rose to the top of the criminal ranks. As the Queen of New York City … END_OF_DOCUMENT_TOKEN_TO_BE_REPLACED

This is the true story of Carmine Imbriale – a gambler, a brawler, a bandit, a bookie, an enforcer. For two decades, Imbriale was a street-level operative in one of the most violent crews in the Colombo Family, and he endeared himself to some of the … END_OF_DOCUMENT_TOKEN_TO_BE_REPLACED

Ten must track down and stop rogue scientists behind the development of criminal technology in THE HUMANZEEE EXPERIMENTS, the next installment of The 'Ten' Mystery Series! The International Security for Technological Innovations, a federal … END_OF_DOCUMENT_TOKEN_TO_BE_REPLACED

A 1986 family tragedy propels this gripping true crime debut as a mother searches for answers in the shocking murder of her husband—and conviction of her son. For years, Cherie struggles to overcome the consuming grief she suffers from the loss of … END_OF_DOCUMENT_TOKEN_TO_BE_REPLACED

It was a dreary winter afternoon in Ayer, Massachusetts, a quintessential New England town, the type which is romanticized in Robert Frost's poems. But on January 30, 1979, a woman’s scream was heard piercing the northeast tempest wind. In an … END_OF_DOCUMENT_TOKEN_TO_BE_REPLACED