In need of a publicity photo shoot in LA, well known professional photographer Bridgitte Krupke (who also happens to be John’s daughter) decided to go for the real thing at the end of LAX runway 24R. In other words, the MD-80 was really screaming by overhead. This is not photoshopped!

Flying Your Way On November 15, 2016, LOCKOUT, The Latest Aviation Thriller From John Nance!

As a kid, no airplane ever flew past me unnoticed.

There was a small airfield just a few miles from my home in North Dallas and I spent many an hour riding over there on my bike to watch the small airplanes come and go – occasionally begging a ride around the pattern. Aviation was clearly in my DNA: my dad was a B-17, B-25, and B-29 pilot in WWII, my uncle a B-17 aircraft commander shot down and a POW in Germany for three years, and another uncle was a B-25 commander and one of the character models for Joe Heller’s Catch 22 (they served together on Corsica). My son, Chris, is now a third generation Air Force pilot (C-130’s). It was never a question that I would be a pilot, just when and how. 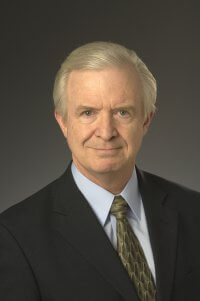 After getting my private pilot’s license in 1965 and profoundly scaring myself in the next few years before realizing how little I knew and how minimal my civilian training had been (I was dangerously allowed to solo after only 3 hours of flight instruction), I grounded myself in anticipation of starting Air Force Undergraduate Pilot Training. Thanks to the Air Force, I finally ended up with world class preparation to fly professionally, and the dream of becoming an airline pilot was realized after leaving active duty when Braniff International brought me aboard in 1975. Flying through the intervening 51 years between my private license and today has given me a rich history of incredible airborne experiences, airline, private, and military, flying through two wars in the C-141, and being at the controls of Boeing 747’s, DC-8’s, 727’s and 737’s flying all over the planet. 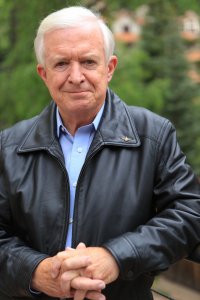 John lecturing at the Telluride Institute in Colorado, 2015

But the awe and respect for the essentially unnatural act of levitating a heavier than air machine never leaves me. Even now, sitting at the end of the runway in my reliable Mooney single engine preparing for takeoff, I am acutely aware of how unforgiving aviation can be in the face of negligence, or even a blasé attitude.

What I still get out of flying is a multi-dimensional thing: The challenge of melding back into the same air traffic control environment with precisely the same professionalism and procedures I’d be using at the helm of a Boeing 777; the physical and mental challenge of actually flying the machine and making good decisions as well as achieving landings that don’t register on the Richter Scale; and the incredible fun and freedom of being able to shrink time and distance with wings, and view the world from above, seeing sights occasionally so beautiful that if painted, they’d look as surreal as a velvet Elvis. 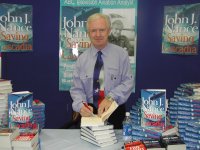 John back in his native Texas signing copies of a novel about the Pacific Northwest. Geographically ecumenical!

“A taut high-tech mystery that could have been written only by an airline industry insider.” – New York Times bestselling author Stephen Coonts

John and Kathleen with the members of the National Transportation Safety Board, 2014

“A combination of The Hot Zone and Speed.” – USA Today

“So compelling it’s tough to look away.” – People

“Readers are in for death-defying plane rides, lively dialogue, and realistic characters who survive crises with courage and humor.” – Associated Press

“Gripping! Breathlessly unrolls a succession of disasters. . . If you want a literary equivalent of the quake experience, On Shaky Ground is the book for you.” – San Francisco Examiner & Chronicle

On takeoff from Denver during a winter blizzard, an airliner piloted by veteran Captain Marty Mitchell overruns a commuter plane from behind. Bizarrely, the fuselage of the smaller aircraft is tenuously wedged onto the huge right wing of his Boeing … END_OF_DOCUMENT_TOKEN_TO_BE_REPLACED

ME FLY? IS THERE AN APP FOR THAT? Most of us who remain in love with flying in any reasonable form have to be feeling a bit helpless these days regarding the march of articles and reports (including a few studies) documenting declining enrollment … END_OF_DOCUMENT_TOKEN_TO_BE_REPLACED

For all my career as an airline pilot (Braniff International, 1975-May 12, 1982, 4:34 PM; and Alaska Airlines, 1985 2005) I’ve heard the breathless rumor that a pilot shortage was just around the corner–and it never was. Until now. Today, for … END_OF_DOCUMENT_TOKEN_TO_BE_REPLACED

Every now and then it seems like all you hear about are private aircraft accidents. To a certain extent, that’s due to a herd mentality among media–one crash begets heightened attention and quick reporting of the next one if close in time. But it’s … END_OF_DOCUMENT_TOKEN_TO_BE_REPLACED

Ah, harmony! When you’re sitting in the cabin of a jetliner zipping through hostile atmosphere at 39-thousand feet, legally and effectively at the mercy of your flight crew, the last thing you want back in 42B is a reason to worry about your crew … END_OF_DOCUMENT_TOKEN_TO_BE_REPLACED

Due to Sullivan’s extensive writing about Ted Bundy (which has produced six books), he’s become a sort of magnet over the years, drawing out many people who were part of the Bundy story, but have otherwise kept a low profile over the decades; and … END_OF_DOCUMENT_TOKEN_TO_BE_REPLACED

Volume One The Early Years In 1944 Brooklyn, newborn Michael J. Hardy is rejected by his mother so she can run with gangster Bugsy Siegel, Hardy’s godfather. Shirley Rook rose to the top of the criminal ranks. As the Queen of New York City … END_OF_DOCUMENT_TOKEN_TO_BE_REPLACED

This is the true story of Carmine Imbriale – a gambler, a brawler, a bandit, a bookie, an enforcer. For two decades, Imbriale was a street-level operative in one of the most violent crews in the Colombo Family, and he endeared himself to some of the … END_OF_DOCUMENT_TOKEN_TO_BE_REPLACED

Ten must track down and stop rogue scientists behind the development of criminal technology in THE HUMANZEEE EXPERIMENTS, the next installment of The 'Ten' Mystery Series! The International Security for Technological Innovations, a federal … END_OF_DOCUMENT_TOKEN_TO_BE_REPLACED

It was a dreary winter afternoon in Ayer, Massachusetts, a quintessential New England town, the type which is romanticized in Robert Frost's poems. But on January 30, 1979, a woman’s scream was heard piercing the northeast tempest wind. In an … END_OF_DOCUMENT_TOKEN_TO_BE_REPLACED