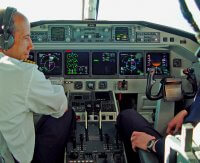 Ah, harmony! When you’re sitting in the cabin of a jetliner zipping through hostile atmosphere at 39-thousand feet, legally and effectively at the mercy of your flight crew, the last thing you want back in 42B is a reason to worry about your crew having relational problems.

You know, not playing well together.

Sometimes the stress of keeping several hundred people fed and watered begins to show on the flight attendants and the passengers begin to notice. But regardless of any spats among the flight attendants, you can always be secure in knowing that your pilots, who are snugly locked away up there in the cockpit, are NOT subject to such human reactions as, well, not getting along.

I bring this up because too many readers over the years have written (or come up to me at book signings and speeches) with wide-eyed concern that I’ve grossly overstated reality when, in one of my thrillers, the pilots weren’t exactly friends. The worry, of course, is always the same: “If pilots get upset with each other, then aren’t we in mortal danger in the back?”

All right, so let me give you a good lawyer-like answer, which is highly appropriate since I am, in fact, a lawyer. Here goes: 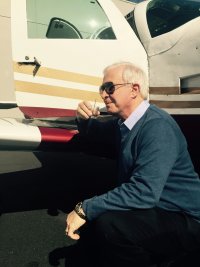 “Yes”, if your pilots are having a fistfight on final approach, we got a problem, and damned if it isn’t a big one!

But “No,” because professional airline pilots the world over are trained to stop an argument in its tracks by saying the equivalent of: “This is not the place to have this discussion. Let’s save it until we’re on the ground.”

This doesn’t mean we all love each other. All airline pilots at one time or another have had to refrain from pounding the @$#% out of someone who desperately needed it (the formal definition of stress), in order to remain dignified and professional and safe. All of us know that the cockpit is no place for the severe diversion of attention caused by anger and conflict.

And I think you see that knowledge reflected in my characters. Take the case of Captain James Holland in my thriller Pandora’s Clock. Feeling beaten down by the system, his airline, and pretty much everyone else, he finds himself essentially attacked by an arrogant management check pilot who possesses only a fraction of Holland’s experience. But when everything (including a suspected world-killing virus) hits the fan, Captain Holland has to regain command and leadership, and his first task is dealing professionally with Mr. Robb, the inexperienced check pilot in the right seat. In fact, it wasn’t the virus or the international convulsion of worry that was my focal point, it was the tension and deep conflict between Holland and Robb that formed the arc of the story. It was also the professional way they both ended up handling the conflicts that, even though messy, represent how we really are in airline cockpits.

In my newest work, LOCKOUT, the pilot conflicts are equally representative of reality, both in the fact that there ARE dislikes and conflicts based on external factors (such as bubbling anger between different pilot groups in contentious mergers), as well as personal dislikes and professional clashes. In LOCKOUT, Captain Jerry Tollefson squares off with senior Captain Bill Bream even before they’re off the ground, but the deeper professional conflict is between Jerry and his Copilot/First Officer, Dan Horneman. The differences in Horneman’s and Tollefson’s backgrounds (one is ex navy, the other civilian-trained and wealthy), coupled with the history of a near-catastrophic first meeting years before, make for a frosty cockpit. But Horneman and Tollefson not only get over it, they… well, this is a no-spoiler zone.

The bottom line is this: While a tiny handful of serious cockpit clashes over the decades have endangered flights, the number is infinitesimal. The amazing thing is how professional and metered and careful the cadre of airline pilots worldwide really are, and how willing they are to suppress conflict until once again safely on the ground. That’s what should keep you feeling secure in the back. After all, we pilots have a vested interest in arriving alive as well.

Now if we could only get a Congress that worked that way!

On takeoff from Denver during a winter blizzard, an airliner piloted by veteran Captain Marty Mitchell overruns a commuter plane from behind. Bizarrely, the fuselage of the smaller aircraft is tenuously wedged onto the huge right wing of his Boeing … END_OF_DOCUMENT_TOKEN_TO_BE_REPLACED

ME FLY? IS THERE AN APP FOR THAT? Most of us who remain in love with flying in any reasonable form have to be feeling a bit helpless these days regarding the march of articles and reports (including a few studies) documenting declining enrollment … END_OF_DOCUMENT_TOKEN_TO_BE_REPLACED

For all my career as an airline pilot (Braniff International, 1975-May 12, 1982, 4:34 PM; and Alaska Airlines, 1985 2005) I’ve heard the breathless rumor that a pilot shortage was just around the corner–and it never was. Until now. Today, for … END_OF_DOCUMENT_TOKEN_TO_BE_REPLACED

Every now and then it seems like all you hear about are private aircraft accidents. To a certain extent, that’s due to a herd mentality among media–one crash begets heightened attention and quick reporting of the next one if close in time. But it’s … END_OF_DOCUMENT_TOKEN_TO_BE_REPLACED

Ah, harmony! When you’re sitting in the cabin of a jetliner zipping through hostile atmosphere at 39-thousand feet, legally and effectively at the mercy of your flight crew, the last thing you want back in 42B is a reason to worry about your crew … END_OF_DOCUMENT_TOKEN_TO_BE_REPLACED

Some Cases You Solve. Some Cases You Survive. Naval Criminal Investigative Service Special Agent, Tyrone Benhoff is in purgatory. That’s what agents call it when they find themselves on the wrong side of command and are transferred to a place … END_OF_DOCUMENT_TOKEN_TO_BE_REPLACED

New from award-winning author Terry Persun! After the murder of his wife and unborn child, the only time freelance tech investigator Ten feels alive is when he cuts himself. For the last few years, he has taken freelance investigative jobs. Some of … END_OF_DOCUMENT_TOKEN_TO_BE_REPLACED

Coming January 29th to REELZChannel™! The DEADLY ASSOCIATES documentary! Step into Chicago during the 1960s and ‘70s, where mobsters influence everyone from strip-club owners to Teamsters, aldermen, judges, and local police. It is a world where … END_OF_DOCUMENT_TOKEN_TO_BE_REPLACED

"Lizzette Martinez’s story embodies the fire energy that gives light and life to survivors all around her! Survivors need to see strength and perseverance despite opposition, and Lizzette models just that." - Melissa Schuman, actress and singer In … END_OF_DOCUMENT_TOKEN_TO_BE_REPLACED

Soon To Be A Documentary Series! My name is Suzanne Buchanan. There is an active arrest warrant for me in Thailand for articles I published on "The Backpacker Murders" as the former owner and editor of the Samui Times. I am a British citizen … END_OF_DOCUMENT_TOKEN_TO_BE_REPLACED

In this true crime-flavored novel, Detective William Boyett is called out on Mardi Gras evening in Mobile, Alabama to investigate the discovery of a young woman’s body wrapped in a carpet in a vacant lot a few blocks from the parade route. Over … END_OF_DOCUMENT_TOKEN_TO_BE_REPLACED