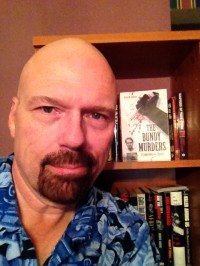 On December 2, my book, Vampire: The Richard Chase Murders was published by WildBlue Press. It’s a tale of terror, where the city of Sacramento, California was, for a very brief time, subjected to a series of diabolical murders and mutilations from the madman the world later came to know as the Vampire of Sacramento. Referring to him as “vampire” was not an attempt at drama, but was an apt description, seeing that Richard Chase loved drinking the blood of his victims. Indeed, he believed he needed their blood to survive.

When I decided to begin this project, I knew I’d be traveling to Sacramento to visit the many pertinent sites, interview one of the detectives who worked the case, and spend a long day at the Sacramento District Attorney’s office going through their very extensive file collection (fourteen boxes in all). While there, I also had the opportunity to photograph real evidence from the murders, and these photographs, as well as some modern-day shots I took of the crime scenes, will be included in this new edition. And, I must say, it was very strange handling items that were directly connected to the murder victims, and of course, to their diabolical killer.

And while all would go well during our trip out West, there was one event that happened within fifteen minutes of our arrival in the city that I found extremely odd. What follows is from the preface of the book:

“An interesting postscript to the actual beginning of my journey to tell the story of the Richard Chase murders starts with our arrival in Sacramento, California. Having taken an Amtrak passenger train, we arrived in the city around 9:00 p.m. on January 30, 2012, a good six hours later than expected due to a fire on the train in Hastings, Nebraska. Gathering our luggage, we took a taxi to our hotel, and as my wife entered the lobby to register us, I helped the driver unload our things and quickly tipped him so he could leave. As the cabbie made a U-turn and headed back to the train station for additional passengers, I grabbed two suitcases and headed for the hotel’s front door. As I did so, I heard someone calling out to me. Turning around, I rested the suitcases on the pavement and watched a disheveled young man with dark hair approaching me. Bathed in the artificial light of the parking lot, I could see he appeared very much like the Richard Chase of 1978. When I asked him what he wanted (I thought it would be money), he asked for a cigarette. I told him no, explaining that I didn’t smoke. With that, a rather strange look spread across his face, and he turned and walked away. As I watched him go, he let out a strange howl and moved his body oddly.

That episode was the beginning of this book.”

The man who came up to me had the facial features of the killer. Even the length of his hair, its color and style, appeared the same. Indeed, as far as I was concerned, he was the proverbial spitting-image of Richard Chase, and this gave me the strange feeling it was 1978 again, and I’d amazingly crossed paths with the mad killer. It was as if he’d come back to welcome me to his city.

This didn’t bother me, of course, yet I have to admit that even as I stood there watching and listening, I kept thinking ‘Man, this is just too weird’. I knew it wasn’t an apparition. But it was a doppelganger of Richard Chase, somehow explainable, and yet I couldn’t explain it, and this strange occurrence remains as mysterious to me today as it did the moment I was standing there beholding him.

As to the true identity of who or what I was dealing with, I cannot say. All that I know for sure, is that this strange figure remains a mystery, and the questions I have about him will not, or perhaps cannot, ever be answered. At least not in this life.

Due to Sullivan’s extensive writing about Ted Bundy (which has produced six books), he’s become a sort of magnet over the years, drawing out many people who were part of the Bundy story, but have otherwise kept a low profile over the decades; and … END_OF_DOCUMENT_TOKEN_TO_BE_REPLACED

Volume One The Early Years In 1944 Brooklyn, newborn Michael J. Hardy is rejected by his mother so she can run with gangster Bugsy Siegel, Hardy’s godfather. Shirley Rook rose to the top of the criminal ranks. As the Queen of New York City … END_OF_DOCUMENT_TOKEN_TO_BE_REPLACED

This is the true story of Carmine Imbriale – a gambler, a brawler, a bandit, a bookie, an enforcer. For two decades, Imbriale was a street-level operative in one of the most violent crews in the Colombo Family, and he endeared himself to some of the … END_OF_DOCUMENT_TOKEN_TO_BE_REPLACED

Ten must track down and stop rogue scientists behind the development of criminal technology in THE HUMANZEEE EXPERIMENTS, the next installment of The 'Ten' Mystery Series! The International Security for Technological Innovations, a federal … END_OF_DOCUMENT_TOKEN_TO_BE_REPLACED

It was a dreary winter afternoon in Ayer, Massachusetts, a quintessential New England town, the type which is romanticized in Robert Frost's poems. But on January 30, 1979, a woman’s scream was heard piercing the northeast tempest wind. In an … END_OF_DOCUMENT_TOKEN_TO_BE_REPLACED