A CLOCKWORK MURDER–An unthinkable crime and its aftermath

The brutal murder of Jacine Gielinski is one of those that stays with even an author as exposed to horrific crimes as I have been. Part of that is it was so random. She pulled up to a red light one evening at just the wrong moment and that sealed her fate. Part of it is the way this ‘fantasy’ took on a life of its own with two misfits for months before it became a reality. 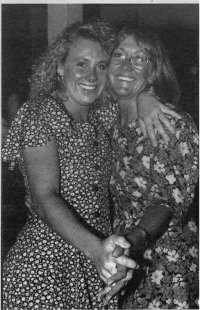 Jacine and her mother Peggy were close.

It’s also an in-depth look at our court system and the machinations that go on in the search for the truth and justice that seem to forget that this was about the horrifying murder of a young woman at the hands to two young men. As one reader has noted, it’s a story that questions whether some people are born monsters, or are created. And what role does violence in the media, particularly something like violent pornography add fuel to an evil plot?

However, I think more than anything, what really affected me about the case was the impact the murder of her daughter had on Peggy Luiszer. It was as if the life had been drained from her, too. And then to top it off, what she was put through as the defense attorneys tried to wear her down so that she would ask the District Attorney to drop the death penalty possibility against the defendants was premeditated and beyond the pale. Cruel and unusual punishment? Why is that protection afforded only to the accused?

This isn’t to say that defense attorneys should not do everything within the law, and reason, to fight for their clients’ rights and lives. However, was there a point when that crossed the line and added to the horror of what happened to Jacine Gielinski and its impact on her family? Read about it in A Clockwork Murder and let me know what you think. –Steve Jackson

A CLOCKWORK MURDER by Steve Jackson

It's always a good day for free audiobooks! That's right! Free audiobooks! Just a gift from us to you, our readers.   Browse by genre and select the cover to get more information and your free copy! Non-Fiction True Crime Business … END_OF_DOCUMENT_TOKEN_TO_BE_REPLACED

We know how hard 2020 has been. To help you end the year on a better note, we wanted to give you the gift of free audiobooks! Hence, the Holiday 2020 Audiobook Giveaway! You're probably thinking of gifts for others right now, like we always do during … END_OF_DOCUMENT_TOKEN_TO_BE_REPLACED

A little before midnight on May 30, 1997, fourteen-year-old Brandy DuVall waited at a bus stop in the Denver area for a ride back to her grandparents' home after spending the evening at a friend’s home. She was wearing a bright-red Chicago Bulls … END_OF_DOCUMENT_TOKEN_TO_BE_REPLACED

FOR THE FIRST TIME IN AUDIOBOOK FORMAT! On a snowy winter evening in 1982, twenty-one-year-old Mary Brown accepted a ride from a handsome stranger in the resort town of Breckenridge, Colorado. The trip ended with her brutally beaten and raped. … END_OF_DOCUMENT_TOKEN_TO_BE_REPLACED

The Night A Twisted Fantasy Became Demented Reality They thought about their evil fantasy for months. Then, wound up like clockwork toys ... they acted. In April 1997, pretty, 22-year-old Jacine Gielinski stopped her car at a red light in … END_OF_DOCUMENT_TOKEN_TO_BE_REPLACED

From Jackson's Classic True Crime Library ROUGH TRADE NOW AVAILABLE IN eBOOK, PRINT, AND AUDIO BOOK! Early one morning in May 1997, a young couple on their way to work in the mountains of Colorado spotted what looked like a man dragging a body up … END_OF_DOCUMENT_TOKEN_TO_BE_REPLACED

The body of Anita Andrews, the owner and bartender at Fagiani’s Cocktail Lounge in Napa, California was found in her bar ... ... raped, beaten, and stabbed to death in a bloody frenzy. She’d last been seen alive the night before talking to a … END_OF_DOCUMENT_TOKEN_TO_BE_REPLACED

The Captivating "True Story Of The World's Premier Forensic Investigators" at NecroSearch International Updated and Revised! Now Available for the First Time As Kindle eBook, Audible and iTunes Editions! A body stuffed in a car trunk swallowed by … END_OF_DOCUMENT_TOKEN_TO_BE_REPLACED

New York Times Bestselling Author Pens A True Horror Story About A Real-life Monster include "https://wildbluepress.com/wp-content/themes/magazine-pro/wbp-maincontentsalesbuttons.php?title=bogeyman"; BOGEYMAN: He Was Every Parent's Nightmare. The … END_OF_DOCUMENT_TOKEN_TO_BE_REPLACED

Due to Sullivan’s extensive writing about Ted Bundy (which has produced six books), he’s become a sort of magnet over the years, drawing out many people who were part of the Bundy story, but have otherwise kept a low profile over the decades; and … END_OF_DOCUMENT_TOKEN_TO_BE_REPLACED

Volume One The Early Years In 1944 Brooklyn, newborn Michael J. Hardy is rejected by his mother so she can run with gangster Bugsy Siegel, Hardy’s godfather. Shirley Rook rose to the top of the criminal ranks. As the Queen of New York City … END_OF_DOCUMENT_TOKEN_TO_BE_REPLACED

This is the true story of Carmine Imbriale – a gambler, a brawler, a bandit, a bookie, an enforcer. For two decades, Imbriale was a street-level operative in one of the most violent crews in the Colombo Family, and he endeared himself to some of the … END_OF_DOCUMENT_TOKEN_TO_BE_REPLACED

Ten must track down and stop rogue scientists behind the development of criminal technology in THE HUMANZEEE EXPERIMENTS, the next installment of The 'Ten' Mystery Series! The International Security for Technological Innovations, a federal … END_OF_DOCUMENT_TOKEN_TO_BE_REPLACED

It was a dreary winter afternoon in Ayer, Massachusetts, a quintessential New England town, the type which is romanticized in Robert Frost's poems. But on January 30, 1979, a woman’s scream was heard piercing the northeast tempest wind. In an … END_OF_DOCUMENT_TOKEN_TO_BE_REPLACED