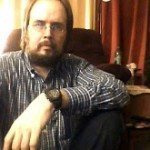 Veteran true crime author Steve Jackson channels the well-established In Cold Blood tradition of absenting himself from the plot, like a journalist, while constructing a narrative, driven by action and dialog, influenced by novel-writing technique. Jackson’s gradually unfolding story feels familiar to anybody accustomed to reading police procedurals and crime thrillers. The horrifying aspects of Jackson’s narrative, of the very killer every parent dreads their children encountering, become only more eerie because they really happened. Read the complete Wordbasket review by University of Nebraska English Professor Kevin Nenstiel (Semi-Spoiler Alert!)

Two Great True Crime Books For The Price Of One! Filling Out The Form Also Enters You To Win One Of Four Signed Print Copies Of SMOOTH … END_OF_DOCUMENT_TOKEN_TO_BE_REPLACED

Date: August 7, 2014 Garland police detective Gary Sweet discusses on Dallas WFAA television how he got involved in the case that was the basis for … END_OF_DOCUMENT_TOKEN_TO_BE_REPLACED

It was a stimulating and inspirational day at our most recent salon in Cardiff-by- the-sea (or so I’m told). I was thrilled that a couple of repeat attendees said they … END_OF_DOCUMENT_TOKEN_TO_BE_REPLACED

Will A Serial Killer Soon Walk The Streets Again? Don Miller was quiet and reserved.  As a former youth pastor, he seemed a devout Christian.  No one would have ever suspected that the recent graduate of the Michigan State University … END_OF_DOCUMENT_TOKEN_TO_BE_REPLACED

The public knows him as the character Tony Darvo in the movie Midnight Run, but Richie Salerno was born into the world of the Brooklyn Mafia during the heyday of the New York mob and for a time it looked like he'd get caught up in a life of … END_OF_DOCUMENT_TOKEN_TO_BE_REPLACED

The day we met in October of 1997, I was working at the District Court in Traverse City, Michigan as a Deputy Clerk.  It was like most other days with arraignments, sentencings, civil case hearings and the like. People shuffling in and out, … END_OF_DOCUMENT_TOKEN_TO_BE_REPLACED

A little before midnight on May 30, 1997, fourteen-year-old Brandy DuVall waited at a bus stop in the Denver area for a ride back to her grandparents' home after spending the evening at a friend’s home. She was wearing a bright-red Chicago Bulls … END_OF_DOCUMENT_TOKEN_TO_BE_REPLACED

If you want a view into the world that lies behind the Ted Bundy murders, this last work in a series of six books on Bundy, is definitely for you. For within these pages you’ll read of the many questions still surrounding this fascinating and … END_OF_DOCUMENT_TOKEN_TO_BE_REPLACED

What do Wyatt Earp, Belle Gunness, Big Foot the Renegade, Billy the Kid, and Dr. H.H. Holmes, and The Black Hand have in common? They were all subjects of true crime newspaper reporting in the 1800s, and now these stories and that of many others … END_OF_DOCUMENT_TOKEN_TO_BE_REPLACED

As the adopted son of two cult leaders, Benjamin Risha was raised to someday assume a place of leadership in the Tony and Susan Alamo Christian Foundation with the Bible, and his parents’ interpretation of it, as his guide. He believed the prophecies … END_OF_DOCUMENT_TOKEN_TO_BE_REPLACED