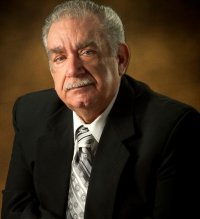 Dennis Griffin is an award winning true crime author, focusing on organized crime in Las Vegas and the Tony Spilotro era in particular. His books have been the basis for multiple organized crime documentaries; and he has frequently been a featured speaker at the Las Vegas-Clark County Library’s Mob Month.

I retired in 1994, after a 20-year career in investigations and law enforcement in New York State. In 1996 I wrote my first novel, The Morgue, and have since published six more mystery/thrillers. They are: Red Gold, Blood Money, Pension, Killer In Pair-A-Dice, One-Armed Bandit and Vegas Vixen.

My debut in non-fiction, Policing Las Vegas–A History of Law Enforcement in Southern Nevada, was released in April 2005. It covers the evolution of law enforcement in Las Vegas and Clark County from the city’s establishment in 1905. My second non-fiction, The Battle for Las Vegas–The Law versus the Mob, tells the story of the Tony Spilotro era in Las Vegas from 1971 thru 1986. It was released in July 2006 and was a Computer Times Editor’s Selection in October 2006. That was followed in July 2007 by CULLOTTA, the biography of former Chicago and Las Vegas mobster Frank Cullotta. My latest published Mob book is Surviving The Mob, the biography of former Gambino crime family associate Andrew D iDionato, which hit store shelves in January 2011.

Dennis and Frank’s new true crime book, THE RISE AND FALL OF A ‘CASINO’ MOBSTER, is now available for pre-order! Order your copy today to save!

Dennis and Frank Cullotta, co-authors of THE RISE AND FALL OF A ‘CASINO’ MOBSTER, in 2007

In October 2012 my first entertainment book, House Party Tonight, the story of legendary saxophonist Don Hill, was published. That December, Rogue Town, the true story of crime and corruption in Stamford, Connecticut, was released.

La Bella Mafia, the true story of a woman who survived and overcame a life of physical and sexual abuse, was released in October 2013. Two months later, Hole in the Wall Gang, a sequel to CULLOTTA, was published.

In May 2015, Bumping Off Fat Vinny, a fictional tongue-in-cheek account of the efforts of three authors to murder their publisher, was released.

I serve as co-host of the popular Blog Talk Radio show Crime Wire, and am a consultant to the Las Vegas Mob Tour. I am a member of the Wednesday Warrior Writers and Public Safety Writers Association.

Dennis with his wife Faith.

My wife Faith and I are “snow birds” and split our time between Verona, New York and Spring Hill, Florida. We enjoy travel and like a little casino action every now and then.

THE RISE AND FALL OF A ‘CASINO’ MOBSTER

Buy THE RISE AND FALL OF A ‘CASINO’ MOBSTER Now:

It's the holidays again! You're probably searching for and picking out the perfect present for everyone on your list. Consider this your reminder to treat yourself to something nice this holiday season, like free audiobooks with our Holiday Audiobook … END_OF_DOCUMENT_TOKEN_TO_BE_REPLACED

It's always a good day for free audiobooks! That's right! Free audiobooks! Just a gift from us to you, our readers.   Browse by genre and select the cover to get more information and your free copy! Non-Fiction True Crime Business … END_OF_DOCUMENT_TOKEN_TO_BE_REPLACED

We know how hard 2020 has been. To help you end the year on a better note, we wanted to give you the gift of free audiobooks! Hence, the Holiday 2020 Audiobook Giveaway! You're probably thinking of gifts for others right now, like we always do during … END_OF_DOCUMENT_TOKEN_TO_BE_REPLACED

INCLUDES OVER 40 COLOR PHOTOGRAPHS! Frank Cullotta was best known for his exploits as an associate of the Chicago Outfit and his role as Tony Spilotro’s enforcer and street lieutenant in Las Vegas. However, he had another interest besides … END_OF_DOCUMENT_TOKEN_TO_BE_REPLACED

WildBlue Press author and former gangster, Frank Cullota died on August 20, 2020. Although he had a fearsome reputation from his days as a hitman for Mob boss Tony Spilotro, many others knew a different side--gentle, warm, engaging. Among them … END_OF_DOCUMENT_TOKEN_TO_BE_REPLACED

Soon To Be A Documentary Series! My name is Suzanne Buchanan. There is an active arrest warrant for me in Thailand for articles I published on "The Backpacker Murders" as the former owner and editor of the Samui Times. I am a British citizen … END_OF_DOCUMENT_TOKEN_TO_BE_REPLACED

Coming January 29th to REELZChannel™! The DEADLY ASSOCIATES documentary! Step into Chicago during the 1960s and ‘70s, where mobsters influence everyone from strip-club owners to Teamsters, aldermen, judges, and local police. It is a world where … END_OF_DOCUMENT_TOKEN_TO_BE_REPLACED

"Lizzette Martinez’s story embodies the fire energy that gives light and life to survivors all around her! Survivors need to see strength and perseverance despite opposition, and Lizzette models just that." - Melissa Schuman, actress and singer In … END_OF_DOCUMENT_TOKEN_TO_BE_REPLACED

Step inside the death chamber and behind the walls of Ohio’s death row. Bill Kimberlin, Psy.D, invites the reader on an extensive and unbiased journey inside Ohio’s death row in WATCH ME DIE: Last Words From Death Row. You will see how these … END_OF_DOCUMENT_TOKEN_TO_BE_REPLACED

"The wheels of justice turn slowly, but grind exceedingly fine." Renee Fehr knew that Gregory Houser killed her sister Sheryl. There was not a single doubt in her mind. Yet for 27 years Houser walked free. But Renee wouldn’t rest … END_OF_DOCUMENT_TOKEN_TO_BE_REPLACED

On the early morning of March 6, 1993, an intense fire broke out in a tiny nursery. Sixteen minutes later, firefighters had extinguished the blaze, only to reveal a room burned so severely, everything was virtually unrecognizable. Then, they were … END_OF_DOCUMENT_TOKEN_TO_BE_REPLACED

During the early morning hours of July 17, 1983, fatigue became a factor for the young couple from central Illinois who spent their day under the hot sun at Marriott’s Great America amusement park north of Chicago. On their drive home, the tired … END_OF_DOCUMENT_TOKEN_TO_BE_REPLACED

Some Cases You Solve. Some Cases You Survive. Naval Criminal Investigative Service Special Agent, Tyrone Benhoff is in purgatory. That’s what agents call it when they find themselves on the wrong side of command and are transferred to a place … END_OF_DOCUMENT_TOKEN_TO_BE_REPLACED

New from award-winning author Terry Persun! After the murder of his wife and unborn child, the only time freelance tech investigator Ten feels alive is when he cuts himself. For the last few years, he has taken freelance investigative jobs. Some of … END_OF_DOCUMENT_TOKEN_TO_BE_REPLACED

Coming January 29th to REELZChannel™! The DEADLY ASSOCIATES documentary! Step into Chicago during the 1960s and ‘70s, where mobsters influence everyone from strip-club owners to Teamsters, aldermen, judges, and local police. It is a world where … END_OF_DOCUMENT_TOKEN_TO_BE_REPLACED

"Lizzette Martinez’s story embodies the fire energy that gives light and life to survivors all around her! Survivors need to see strength and perseverance despite opposition, and Lizzette models just that." - Melissa Schuman, actress and singer In … END_OF_DOCUMENT_TOKEN_TO_BE_REPLACED

Soon To Be A Documentary Series! My name is Suzanne Buchanan. There is an active arrest warrant for me in Thailand for articles I published on "The Backpacker Murders" as the former owner and editor of the Samui Times. I am a British citizen … END_OF_DOCUMENT_TOKEN_TO_BE_REPLACED

In this true crime-flavored novel, Detective William Boyett is called out on Mardi Gras evening in Mobile, Alabama to investigate the discovery of a young woman’s body wrapped in a carpet in a vacant lot a few blocks from the parade route. Over … END_OF_DOCUMENT_TOKEN_TO_BE_REPLACED