Will “Dig In” To Look For Remains Of Tsar’s Brother 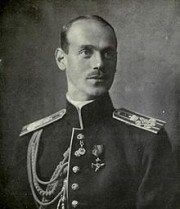 Beginning the first week of June and for the next three weeks thereafter, I’ll be writing a series of posts you can find below this message about an expedition I’m joining to Perm in the very heart of Russia. I’ll be working as part of a team looking for the 97-year-old clandestine grave of the Grand Duke Mikhail Alexandrovich Romanov and his faithful secretary, Brian Johnson. Joining other members of NecroSearch International, the forensic investigators I wrote about in NO STONE UNTURNED, as well as SEARCH (the Scientific Expedition to Account for the Romanov Children), this will be our third attempt to locate the remains of Tsar Nicholas II’s brother and Johnson, who were murdered in June 1918 by Bolshevik revolutionaries. A dashing cavalry officer, who risked his brother’s anger by marrying a commoner for love over duty, Mikhail’s life and death is worthy of a book in itself; I’ll fill you in on some

of his story, including what led us to the search area. In addition to actively participating with the team, which will be using a variety of techniques to search for the graves from Ground-Penetrating Radar to a cadaver dog, I’m working on two books while in Russia. One will be the sequel to NO STONE TURNED, which was recently updated and released for the first time as an eBook and audio book, chronicling the evolution of NecroSearch since the original book was published in 2002. I’m also working on FINDING ANASTASIA, a book that will span time from before the Russian Revolution to the present. It’s an exciting narrative that is part history, part romance, part true detective, portraying two iconic Russian families, one of them the Tolstoys (of War And Peace fame) and the other the Sarandinakis, whose descendant, Peter Sarandinaki, founded SEARCH and is the leader of this expedition as well as my co-author. I hope you’ll join me on our little adventure to the land (and time) of Dr. Zhivago.

Follow the expedition in the blog posts below. Or receive each blog as it is posted by signing up for our WildBlue Press eZine.

*In addition to being a bestselling, award-winning author of true crime, Steve Jackson writes histories and biographies, including winning the 2001 Colorado Center for the Book Award for Best History/Biography for LUCKY LADY: The World War II Heroics of the USS Franklin and Santa Fe, as well being runner-up in 2002 for the prestigious Admiral Samuel Morison Award for Naval History for LUCKY LADY.

A little before midnight on May 30, 1997, fourteen-year-old Brandy DuVall waited at a bus stop in the Denver area for a ride back to her grandparents' home after spending the evening at a friend’s home. She was wearing a bright-red Chicago Bulls … END_OF_DOCUMENT_TOKEN_TO_BE_REPLACED

FOR THE FIRST TIME IN AUDIOBOOK FORMAT! On a snowy winter evening in 1982, twenty-one-year-old Mary Brown accepted a ride from a handsome stranger in the resort town of Breckenridge, Colorado. The trip ended with her brutally beaten and raped. … END_OF_DOCUMENT_TOKEN_TO_BE_REPLACED

The Night A Twisted Fantasy Became Demented Reality They thought about their evil fantasy for months. Then, wound up like clockwork toys ... they acted. In April 1997, pretty, 22-year-old Jacine Gielinski stopped her car at a red light in … END_OF_DOCUMENT_TOKEN_TO_BE_REPLACED

From Jackson's Classic True Crime Library ROUGH TRADE NOW AVAILABLE IN eBOOK, PRINT, AND AUDIO BOOK! Early one morning in May 1997, a young couple on their way to work in the mountains of Colorado spotted what looked like a man dragging a body up … END_OF_DOCUMENT_TOKEN_TO_BE_REPLACED

The body of Anita Andrews, the owner and bartender at Fagiani’s Cocktail Lounge in Napa, California was found in her bar ... ... raped, beaten, and stabbed to death in a bloody frenzy. She’d last been seen alive the night before talking to a … END_OF_DOCUMENT_TOKEN_TO_BE_REPLACED

The Captivating "True Story Of The World's Premier Forensic Investigators" at NecroSearch International Updated and Revised! Now Available for the First Time As Kindle eBook, Audible and iTunes Editions! A body stuffed in a car trunk swallowed by … END_OF_DOCUMENT_TOKEN_TO_BE_REPLACED

Due to Sullivan’s extensive writing about Ted Bundy (which has produced six books), he’s become a sort of magnet over the years, drawing out many people who were part of the Bundy story, but have otherwise kept a low profile over the decades; and … END_OF_DOCUMENT_TOKEN_TO_BE_REPLACED

Volume One The Early Years In 1944 Brooklyn, newborn Michael J. Hardy is rejected by his mother so she can run with gangster Bugsy Siegel, Hardy’s godfather. Shirley Rook rose to the top of the criminal ranks. As the Queen of New York City … END_OF_DOCUMENT_TOKEN_TO_BE_REPLACED

This is the true story of Carmine Imbriale – a gambler, a brawler, a bandit, a bookie, an enforcer. For two decades, Imbriale was a street-level operative in one of the most violent crews in the Colombo Family, and he endeared himself to some of the … END_OF_DOCUMENT_TOKEN_TO_BE_REPLACED

Ten must track down and stop rogue scientists behind the development of criminal technology in THE HUMANZEEE EXPERIMENTS, the next installment of The 'Ten' Mystery Series! The International Security for Technological Innovations, a federal … END_OF_DOCUMENT_TOKEN_TO_BE_REPLACED

A 1986 family tragedy propels this gripping true crime debut as a mother searches for answers in the shocking murder of her husband—and conviction of her son. For years, Cherie struggles to overcome the consuming grief she suffers from the loss of … END_OF_DOCUMENT_TOKEN_TO_BE_REPLACED

It was a dreary winter afternoon in Ayer, Massachusetts, a quintessential New England town, the type which is romanticized in Robert Frost's poems. But on January 30, 1979, a woman’s scream was heard piercing the northeast tempest wind. In an … END_OF_DOCUMENT_TOKEN_TO_BE_REPLACED