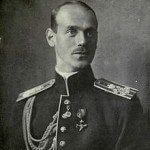 In June 1918, the Grand Duke Mikhail Alexandrovich Romanov and his secretary and friend, Brian Johnson, were abducted by Bolsheviks from their hotel in Perm. The assassins told the men that they were being moved to another city for their “safety,” placed in horse-drawn carriages and driven out into the countryside near the river Kama. However, after five or six kilometers, the carriages came to a stop and the Grand Duke and secretary ordered out. Johnson was shot first and as the Grand Duke went to his aid he, too, was executed. According to reports and rumors, the two men were then buried in shallow graves.

A month later, and six hundred miles to the south and east, Tsar Nicholas, the Tsarina Alexandra, their children, the family doctor and 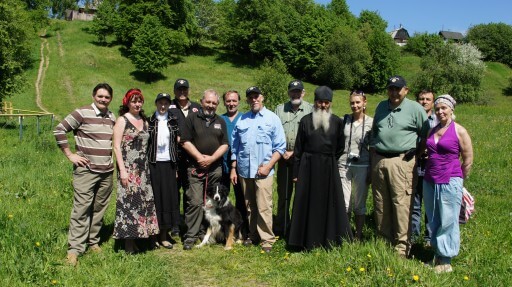 their servants were herded into the basement of a house in Ykaterinburg and slaughtered in frenzy of bullets and bayonets. The murdered royal family was then taken to the countryside and also buried.

However, the location of the gravesites of the murder victims in Perm and Ykaterinburg would remain a secret, kept closely by the Bolsheviks and their descendants the Communist upon the rise of the Soviet Union. It fact it was dangerous to express any sympathy for the royal family, or curiosity as to what happened to them, though the faithful in Perm and Yekaterinburg continued to hope that someday their remains would be found and handed over to the Russian Orthodox Churgh for burial befitting the Russian royal family. 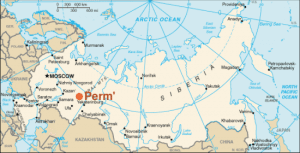 Steve Jackson will join NecroSearch this Summer to search for the remains of the Grand Duke Mikhail Alexandrovich in Perm, Russia

In 1978, two Russian friends in Yekaterinberg, a retired geologist and history buff named Alexander Avdonin and filmmaker Geli Ryabov, using old documents and diaries including those of the killers, discovered a mass grave beneath old railroad ties in a place called Pig’s Meadow. They were sure they’d found the royal family, but the political climate in the Soviet Union made it dangerous to reveal their finding and they returned the remains to the grave. Then in 1991, with the fall of the Berlin Wall and the disintegration of the Soviet Union, the pair announced their findings. There were only two problems: the church did not recognize the remains as belonging to the martyred royal family; and two of the royal children, if it was the correct grave, were missing. 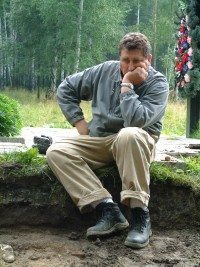 This is where Peter Sarandinaki entered the picture. An American sea captain by trade, Peter is the great-grandson of the White Russian Army General who attempted to reach the royal family and rescue them but was six days too late. Peter’s grandfather, the general’s adjutant, and grandmother, along with a detective assigned to discover the truth about what happened to the royal family and the location of their remains, escaped Russia carrying a box of evidence from the detective’s investigation, including the severed finger of the empress Alexandra.

With the family history, including their own harrowing adventures during the Russian Revolution and Civil War, deeply implanted in Peter’s mind since childhood, he decided that he would with the help of Russian friends, including Avdonin, search for the two missing children. He started a foundation, the Scientific Expedition to Account For the Romanov Children, to raise money and coordinate the search, as well as verifying the remains. It was felt that if the remains of the other two children could be found, it would answer the church’s questions about the legitimacy of the other remains. He also became the point man to have the remains tested by the top DNA laboratories in the world. The labs agreed, the remains were legitimate; still the two children were missing.

After several searches, the remains of the last two Romanov children were found about fifty yards from their parents’ gravesite in 2007. Although Peter was instrumental in identifying the search area where the children were eventually found, he was back in the United States raising money for the foundation when the discovery was made. He thought that at that point the rest of his work would entail continuing his efforts to get the church to accept the DNA evidence.

However, one of his Russian compatriots told him there was one more Romanov missing, the Grand Duke Mikhail Alexandrovich Romanov. No one had found his unmarked grave, but some new documents and diaries had come to light that might help pinpoint the area. So in 2013, Peter returned to Perm, Russia with a team that included members of NecroSearch International, the forensic investigators in my book NO STONE UNTURNED: The True Story of the World’s Premier Forensic Investigators. As Peter and I were working on a book, FINDING ANASTASIA, about his family’s history and story of the Romanov murders and investigation leading up to his own involvement, I was invited to join the team. In addition to documenting the project, I made myself useful by working with British dog-handler Mike “Mick” Swindells and his border collie cadaver dog, “Sam.” Mick and I would lay out grids and then using a hand auger, drill holes about twelve inches deep beneath the surface. Then Mick would bring Sam along to sniff each hole, hoping that even after nearly a hundred years, the smell of death would catch the sensitive nose of the dog.

We didn’t find the Grand Duke or his secretary on that trip though we made great new friends and learned a lot about that mysterious part of the world. We even traveled from Perm to Yekaterinburg to visit the site where the royal family’s remains were found. Nor did the team find the remains in 2014. But we’re going back again in June hoping that the third time’s a charm.

While in Russia for three weeks, I’ll be blogging my “From Russia With Love …” series–if not every day, then frequently. I’ll write about our progress and expedition while including some of the history behind the Grand Duke Mikhail, who some thought might have been the man who could have prevented the Russian Civil War if not for the Bolsheviks, and some of the history of Peter Sarandinaki’s family, as well as the family of his wife, Masha Tolstoy Sarandinaki (yes, THAT Tolstoy) and his quest.

*In 2001, New York Times bestselling author Steve Jackson won the Colorado Center for the Book Award for History/Biography. Some parts of Peter Sarandinaki’s story and the involvement of NecroSearch International are included in a chapter of NO STONE UNTURNED: The True Story of the World’s Premier Forensic Investigators.

A little before midnight on May 30, 1997, fourteen-year-old Brandy DuVall waited at a bus stop in the Denver area for a ride back to her grandparents' home after spending the evening at a friend’s home. She was wearing a bright-red Chicago Bulls … END_OF_DOCUMENT_TOKEN_TO_BE_REPLACED

FOR THE FIRST TIME IN AUDIOBOOK FORMAT! On a snowy winter evening in 1982, twenty-one-year-old Mary Brown accepted a ride from a handsome stranger in the resort town of Breckenridge, Colorado. The trip ended with her brutally beaten and raped. … END_OF_DOCUMENT_TOKEN_TO_BE_REPLACED

Book 3 Pre-Order Coming Soon! In March 2009, pretty, vivacious Rhonda Casto plunged to her death from a 300-foot cliff in the Oregon woods. The only witness, Stephen Nichols, the father of her nine-month-old baby, Annie, told police investigators … END_OF_DOCUMENT_TOKEN_TO_BE_REPLACED

The Night A Twisted Fantasy Became Demented Reality They thought about their evil fantasy for months. Then, wound up like clockwork toys ... they acted. In April 1997, pretty, 22-year-old Jacine Gielinski stopped her car at a red light in … END_OF_DOCUMENT_TOKEN_TO_BE_REPLACED

From Jackson's Classic True Crime Library ROUGH TRADE NOW AVAILABLE IN eBOOK, PRINT, AND AUDIO BOOK! Early one morning in May 1997, a young couple on their way to work in the mountains of Colorado spotted what looked like a man dragging a body up … END_OF_DOCUMENT_TOKEN_TO_BE_REPLACED

The body of Anita Andrews, the owner and bartender at Fagiani’s Cocktail Lounge in Napa, California was found in her bar ...  ... raped, beaten, and stabbed to death in a bloody frenzy. She’d last been seen alive the night before talking to a … END_OF_DOCUMENT_TOKEN_TO_BE_REPLACED

As the adopted son of two cult leaders, Benjamin Risha was raised to someday assume a place of leadership in the Tony and Susan Alamo Christian Foundation with the Bible, and his parents’ interpretation of it, as his guide. He believed the prophecies … END_OF_DOCUMENT_TOKEN_TO_BE_REPLACED

In 1976, a killer who called himself ‘The Son of Sam’ shot and killed a half dozen people and wounded as many more in New York City. During his crime spree, the madman left bizarre letters mocking the police and promising more deaths. After months … END_OF_DOCUMENT_TOKEN_TO_BE_REPLACED

It was the midcentury murder that fascinated a nation and kept it glued for two years to radio, television and newspapers through three trials. Did the handsome, wealthy doctor and his beautiful young paramour plan to kill his glamorous socialite … END_OF_DOCUMENT_TOKEN_TO_BE_REPLACED

Transparency and Accountability Will Help Restore the Credibility of the Church We live in a secular, skeptical, and cynical age. Americans have lost faith in its institutions – including the church. Although the vast majority of Christian … END_OF_DOCUMENT_TOKEN_TO_BE_REPLACED

Born in 1960, Jesus Ruiz Henao grew up poor, but wanted to be rich like the drug dealers he saw growing up in the cocaine-producing region of Colombia’s Valle of the Cauca. To realize his ambition, Ruiz Henao moved to London, United Kingdom, in … END_OF_DOCUMENT_TOKEN_TO_BE_REPLACED