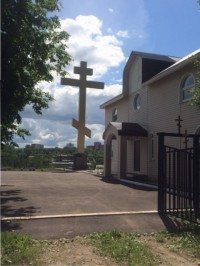 It’s June 12 and Russia National Day, a patriotic holiday for this great and proud country and its warm and generous people. Outside of my hotel window I can hear an orchestra playing the 1812 Overture (celebrating the Russian victory over Bonaparte and the French outside the gates of Moscow). Ironically, it’s also the anniversary of the June 12, 1918 abduction and murder of Grand Duke Mikhail Alexandrovich Romanov and his secretary and friend, Brian Johnson. Thousands of people will join a five kilometer procession from the Holy Trinity Monastery in Perm to a small chapel on Red Mountain dedicated to Mikhail, who like the other assassinated Romanovs is considered a martyred saint by the Russian Orthodox Church. In spite of Soviet suppression of religion, the Russian Orthodox Church in Perm and elsewhere is an important part of the people’s lives. In fact, when we began our search Wednesday, the first thing we did was go to the monastery to be blessed by the priest in the church (a really beautiful building with amazing icons and other art). Another priest came to the site to pray for our success. 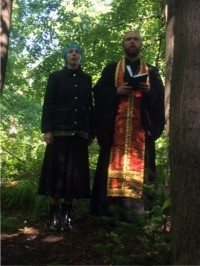 One of our interpreters, Natalia Zheleznova, and a priest from the monastery who came out to pray for our success at the work site.

Mikhail’s chapel overlooks a small valley and meadow where in 2013 our search team first concentrated our efforts to locate the remains of Mikhail and Brian. In 2014, the team moved farther up the valley into a forested area and using remote sensing equipment located an old road buried two feet down that led to Red Mountain. It is in the same area where in 2013 I slogged through the swamp and found the remains of a very old bridge (dated about the right time by a square nail I pulled from one of the trusses). The location and direction of the road matched the description of accounts written in diaries by the Bolshevik murderers. The team believed it was now in the general area of the “crime scene.” But it was still a lot of ground to search for a clandestine grave dug nearly a hundred years earlier and the record becomes murky at this point with shifting stories (the Bolsheviks were accomplished liars who even in 1918 made up different versions of what happened that night, as well as what happened a month later to the Tsar Nicholas II and his family in the basement of a house in Yekaterinburg some 600 miles away). In spite of the success at finding the road in 2014, the team did not locate the graves. 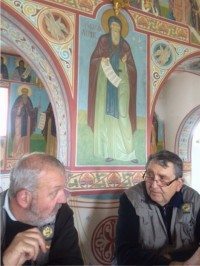 Internationally renowned British search dog handler Mick Swindells and SEARCH founder and team leader Peter Sarandinaki discuss the plan over lunch at the monastery. The monks provide our lunches, mostly out in the field.

The initial plan of this year’s team–comprised of the SEARCH Foundation (Scientific Expedition to Account for the Romanov Children), NecroSearch International, and our Russian counterparts–this year was to search a large area on top of Red Mountain again using remote sensing equipment and a cadaver dog from the United Kingdom. However, soon after the early arrival last week of our team leader, Peter Sarandinaki, an American sea captain and the great-grandson of the White Army general during the Russian civil war who was the first to enter the Ipatiev House in Yekaterinburg where the tsar and his family were murderered, learned about new information that had come out. Peter’s grandfather was the general’s adjutant and was the first member of the White Army to walk into the blood-stained basement where the killings took place, and Peter made it his mission to look for two of the missing Romanov children not found with their family and now to complete his quest by finding Mikhail. 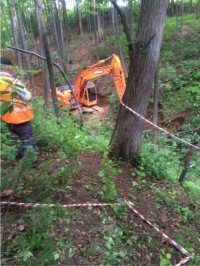 The new information was a story about the boys who were playing in a cave and discovered some bones, including a skull they apparently kept. The skull was either given, or taken, by a “red-haired” police man. Andrey, the Russian federal police colonel working with our team located two of the “boys” (now in their late 30s) and also the police officer. Although their stories don’t match entirely, and they’ve changed them a couple of times, and they are very afraid, there is a lot of consistency with the stories too. The police officer at first said he threw the skull away, and then that his cleaning lady took it, but we now believe that it’s at the city morgue (we know the morgue has a hundred year old skull that was turned into it). Andrey, Peter and Russian forensic anthropologist Sergei Nikitin (who did the initial identification of the remains when the tsar and his family were found) are going to the morgue today to look at it. 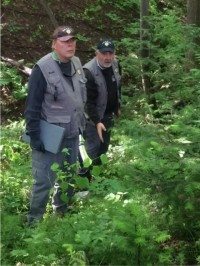 One of the “boys” was interviewed and he gave his version of the location of the cave (which we think might have actually been an arms cache used by the Bolsheviks in the revolution). So yesterday we had a very large excavator come out and tear up a hillside looking for this tunnel or cave (which was allegedly covered up about thirty years ago according to his mother). This included an area where myself and NecroSearch geophysicist Clark Davenport located some “tailings” (as in mine tailings) from a hillside. We didn’t find anything and were discouraged a little (even though it was not the original plan) but that’s when we heard that the former police officer admitted that the skull might be at the morgue (why he lied we still aren’t sure except he is afraid of something). If the skull appears to be the right one, the pressure will be put on the witnesses–who have resisted participating–to help us pinpoint the area. If it’s not the right one, we’ll go back to the original plan. 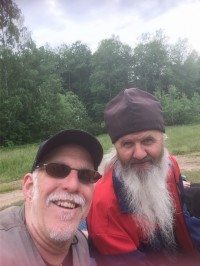 Me and my buddy Father Vasily, the monk caretaker of the Grand Duke Mikhail Romanov’s chapel on Red Mountain

A frequent visitor to our work sites since 2013 has been Father Vasily, the monk who takes care of the chapel on Red Mountain. Other than the yearly procession from the monastery to the chapel, observing our efforts has probably been the most exciting thing in his life. Probably in his sixties with long hair and a long gray beard, he has gone from watching us from afar to becoming our friend, always helpful (when we need a shovel) and with a delightful sense of humor (yesterday he sneaked into the work site when we weren’t watching and was standing in the bucket of the excavator posing for photographs). I haven’t interviewed him yet, but I wonder what he thinks of all of this. Does he want us to find the grand duke? Or would he prefer that the grave’s location remain a secret for him to watch over for his life (if located, the remains would probably be interred in St. Petersburg with the rest of the Romanovs)?

So this is quite the detective story … a historically important detective story that I’ll be turning into a book called FINDING ANASTASIA. In the meantime, you can read about NecroSearch International’s initial involvement in the search for the Romanovs in my book NO STONE UNTURNED.
Tonight there’ll be a big celebratory dinner we’ll attend for the national holiday as well as our work with plenty of vodka toasts so I’ll wrap up here so that I can prepare to hold up my end for the American team (by napping). More to come later!

Book 3 Pre-Order Coming Soon! In March 2009, pretty, vivacious Rhonda Casto plunged to her death from a 300-foot cliff in the Oregon woods. The only witness, Stephen Nichols, the father of her nine-month-old baby, Annie, told police investigators … END_OF_DOCUMENT_TOKEN_TO_BE_REPLACED

The Night A Twisted Fantasy Became Demented Reality They thought about their evil fantasy for months. Then, wound up like clockwork toys ... they acted. In April 1997, pretty, 22-year-old Jacine Gielinski stopped her car at a red light in … END_OF_DOCUMENT_TOKEN_TO_BE_REPLACED

From Jackson's Classic True Crime Library ROUGH TRADE NOW AVAILABLE IN eBOOK, PRINT, AND AUDIO BOOK! Early one morning in May 1997, a young couple on their way to work in the mountains of Colorado spotted what looked like a man dragging a body up … END_OF_DOCUMENT_TOKEN_TO_BE_REPLACED

The body of Anita Andrews, the owner and bartender at Fagiani’s Cocktail Lounge in Napa, California was found in her bar ...  ... raped, beaten, and stabbed to death in a bloody frenzy. She’d last been seen alive the night before talking to a … END_OF_DOCUMENT_TOKEN_TO_BE_REPLACED

The Captivating "True Story Of The World's Premier Forensic Investigators" at NecroSearch International Updated and Revised! Now Available for the First Time As Kindle eBook, Audible and iTunes Editions! "A fascinating journey into the trenches of … END_OF_DOCUMENT_TOKEN_TO_BE_REPLACED

New York Times Bestselling Author Pens A True Horror Story About A Real-life Monster include "https://wildbluepress.com/wp-content/themes/magazine-pro/wbp-maincontentsalesbuttons.php?title=bogeyman"; BOGEYMAN: He Was Every Parent's Nightmare. The … END_OF_DOCUMENT_TOKEN_TO_BE_REPLACED

Marty Croft has it all. A beautiful wife, and a successful career as a commercial artist. That is until his past comes back to haunt him. Enter Gordon Shamus, the psychotic son of Marty’s former gangster boss. After Marty’s wife is kidnapped, he … END_OF_DOCUMENT_TOKEN_TO_BE_REPLACED

Losing a young daughter to murder is the worst nightmare that a mother could possibly imagine, but what if the killer was her son? Charity Lee was thrust into this unimaginable situation when her 13-year-old son Paris murdered her beloved 4-year-old … END_OF_DOCUMENT_TOKEN_TO_BE_REPLACED

The Encyclopedia of the Ted Bundy Murders lists the names of hundreds of people involved in the case as well as dozens of locations where significant events occurred.  Being the final installment in a five-volume series, this veritable “Who’s … END_OF_DOCUMENT_TOKEN_TO_BE_REPLACED

Maybe the youngest son of a violent criminal named Hoggy Thompson was born a beast. Maybe rage was beaten into him. One thing was certain, by the time he reached manhood, Jerry Thompson was a savage killer. He had no conscience about rape, child … END_OF_DOCUMENT_TOKEN_TO_BE_REPLACED