Get MY BROTHER'S KEEPER
eBook 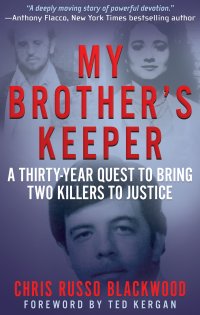 MY BROTHER’S KEEPER is now available from WildBlue Press! Order your copy today!

If your big brother was killed by murderers who thoughtlessly tossed his remains, would you spend a fortune and 30 years to stalk those responsible and bring them to justice? Yeah, you might want to, but…

From the moment he found out his brother was missing, Ted Kergan launched an unparalleled search and recovery mission that put him on a collision path with a teenage-prostitute-turned-registered-nurse and her much older drifter ex-boyfriend, now a Santa Claus doppelganger living on disability.

Ted Kergan tracked the couple’s erratic footsteps through New Orleans’ famed French Quarter during the 1984 World’s Fair, where she sold her body and he worked in a porn shop and as a fully-costumed clown ministering to children. Within a month of their move to Baton Rouge, Gary Kergan, a charismatic businessman, was dead and this odd couple fled to Las Vegas. In a lear jet Ted Kergan rented on his American Express card, Baton Rouge detectives rushed to Las Vegas and extradited the couple to Baton Rouge, where, several months later, the new district attorney decided not to prosecute because Gary Kergan’s body had not been recovered.

Fast forward 28 years into a world where DNA testing confirmed blood in the trunk of Gary Kergan’s Cadillac Eldorado matched that of his son, Wade, who was just 11 years old when his father died. This body of blood put the Kergan cold case on the front burner. Ted Kergan worked with law enforcement officials to have the perpetrators charged with first degree murder and returned to the city of the crime. The ensuing four years were a rollercoaster ride with twists and turns past a suicide attempt by one of the murderers, a Texas EquuSearch dig for Gary Kergan’s body and a September 2015 trial in which one of the killer’s extensive 1984 diary entries became the stars of the show.

“A book you cannot ignore or put down – especially near the end. Chris Blackwood is an author to watch.” –Blaine Pardoe, bestselling author of A Special Kind of Evil

Acadia Parish Sheriff Ken Goss had originally put out the all-points bulletin on Gary’s Cadillac, so he was also notified when the missing car was discovered. He immediately called Ted to let him know the Cadillac was on its way to Baton Rouge. Naturally, Ted wanted to see that car himself; there was no way Ted would accept a second-hand description about the state of that vehicle. Goss had Larry Tucker meet Ted at the State Police Crime Lab, located in Baton Rouge’s mid-city area. Inside the lab, a state trooper pulled Larry Tucker off to the side, out of Ted’s earshot, letting Larry know about the large pool of blood in the car’s trunk. The trooper suggested Larry keep Ted from looking into the trunk. Larry knew there was no way that was going to happen. Instead Larry prepared Ted for what he was going to see, then backed off to give him room to approach the back of the car alone.

Ted glanced briefly into the trunk and quickly retreated. “Your blood runs cold,” He explained, remembering. “You steel yourself beforehand. You sort of see the blood, but you sort of don’t. There’s stuff thrown everywhere in the trunk. So I’m thinking, ‘Is that a lot of blood? What does that mean?’ Then your defense mechanisms put you in denial. It was just another level of horror.”

Ted asked a trooper what the amount of blood meant. At first the officer didn’t answer, but Ted persisted.

“That’s a substantial amount of blood,” the trooper finally told him. The remark later proved to be a gentle understatement. The odd-shaped pool of coagulated blood was a foot wide in some areas. Patches of dried blood stained a number of items in the trunk, including coin changer boxes and bank deposit slips.

Meanwhile, Larry Tucker took a long gander into the trunk, then questioned crime lab technician James Churchman, who was fully engaged in collecting all the evidence the car held – both inside and outside. He summed it up: the victim was already dead when placed in the trunk or he had died there. There was too much blood for any other alternative end but death,. Even with mounting bad news from the days before, both men had held out a glimmer of hope that they would find Gary alive. But seeing the car and that large body of blood in the trunk sucked all hope out of Ted Kergan. As his inner voice of reason finally overcame the one in denial, he accepted the fact that by the time the early hours of Thursday, November 29 had rolled around, his brother lay dead in the trunk of his own car.

I picked up the phone in my Lafayette office one afternoon in September 2012 and said hello to a pleasant voice from the past. I hadn’t spoken to Memry Tucker, the daughter of a long-time business associate, in years. 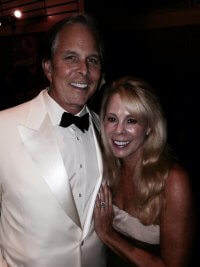 “Memry calmly dropped a bomb. She had news about the unsolved murder of my older brother, Gary Kergan. I was speechless. How was Memry, of all people, involved in a case that had been closed for nearly 30 years?

By the time Memry and I hung up, my head was swimming in even more questions. What unfolded over the next three years was amazing. I had doubts about this book, because I wasn’t sure the story could be told in a way others would believe ‒ uncanny coincidences and weird twists of fate.

These pages demonstrate author Chris Blackwood’s dedication and marvelous gift of storytelling. She captures the best example of Gary’s legacy ‒ all the people who fought so long and hard for justice for him. These were mostly people he never knew. That’s the impact my brother had on people.

I’m tempted to say I was fortunate to cross paths with them. But was it fortune? As I would come to learn, Gary had been looking down the entire time, guiding and protecting me as he always had.” – Ted Kergan, August 2017

Soon To Be A Documentary Series! My name is Suzanne Buchanan. There is an active arrest warrant for me in Thailand for articles I published on "The Backpacker Murders" as the former owner and editor of the Samui Times. I am a British citizen and had … END_OF_DOCUMENT_TOKEN_TO_BE_REPLACED

Coming January 29th to REELZChannel™! The DEADLY ASSOCIATES documentary! Step into Chicago during the 1960s and ‘70s, where mobsters influence everyone from strip-club owners to Teamsters, aldermen, judges, and local police. It is a world where … END_OF_DOCUMENT_TOKEN_TO_BE_REPLACED

"Lizzette Martinez’s story embodies the fire energy that gives light and life to survivors all around her! Survivors need to see strength and perseverance despite opposition, and Lizzette models just that." - Melissa Schuman, actress and singer In … END_OF_DOCUMENT_TOKEN_TO_BE_REPLACED

Step inside the death chamber and behind the walls of Ohio’s death row. Bill Kimberlin, Psy.D, invites the reader on an extensive and unbiased journey inside Ohio’s death row in WATCH ME DIE: Last Words From Death Row. You will see how these … END_OF_DOCUMENT_TOKEN_TO_BE_REPLACED

"The wheels of justice turn slowly, but grind exceedingly fine." Renee Fehr knew that Gregory Houser killed her sister Sheryl. There was not a single doubt in her mind. Yet for 27 years Houser walked free. But Renee wouldn’t rest … END_OF_DOCUMENT_TOKEN_TO_BE_REPLACED

On the early morning of March 6, 1993, an intense fire broke out in a tiny nursery. Sixteen minutes later, firefighters had extinguished the blaze, only to reveal a room burned so severely, everything was virtually unrecognizable. Then, they were … END_OF_DOCUMENT_TOKEN_TO_BE_REPLACED

During the early morning hours of July 17, 1983, fatigue became a factor for the young couple from central Illinois who spent their day under the hot sun at Marriott’s Great America amusement park north of Chicago. On their drive home, the tired … END_OF_DOCUMENT_TOKEN_TO_BE_REPLACED

Some Cases You Solve. Some Cases You Survive. Naval Criminal Investigative Service Special Agent, Tyrone Benhoff is in purgatory. That’s what agents call it when they find themselves on the wrong side of command and are transferred to a place … END_OF_DOCUMENT_TOKEN_TO_BE_REPLACED

New from award-winning author Terry Persun! After the murder of his wife and unborn child, the only time freelance tech investigator Ten feels alive is when he cuts himself. For the last few years, he has taken freelance investigative jobs. Some of … END_OF_DOCUMENT_TOKEN_TO_BE_REPLACED

Coming January 29th to REELZChannel™! The DEADLY ASSOCIATES documentary! Step into Chicago during the 1960s and ‘70s, where mobsters influence everyone from strip-club owners to Teamsters, aldermen, judges, and local police. It is a world where … END_OF_DOCUMENT_TOKEN_TO_BE_REPLACED

"Lizzette Martinez’s story embodies the fire energy that gives light and life to survivors all around her! Survivors need to see strength and perseverance despite opposition, and Lizzette models just that." - Melissa Schuman, actress and singer In … END_OF_DOCUMENT_TOKEN_TO_BE_REPLACED

Soon To Be A Documentary Series! My name is Suzanne Buchanan. There is an active arrest warrant for me in Thailand for articles I published on "The Backpacker Murders" as the former owner and editor of the Samui Times. I am a British citizen and had … END_OF_DOCUMENT_TOKEN_TO_BE_REPLACED

In this true crime-flavored novel, Detective William Boyett is called out on Mardi Gras evening in Mobile, Alabama to investigate the discovery of a young woman’s body wrapped in a carpet in a vacant lot a few blocks from the parade route. Over … END_OF_DOCUMENT_TOKEN_TO_BE_REPLACED