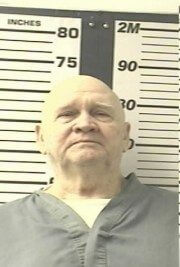 Michele Wallace’s killer, Roy Melanson, as he looks now at a Colorado prison

It takes a certain kind of person to willingly confront murderers and deal with the ripple effect of their monstrous crimes. And not just police officers or those you’d typically associate with the justice system. The members of NecroSearch International, a “membership by invitation only” group of scientists, criminalists and law enforcement officers, are those kinds of people, too. Headquartered in Colorado but operating all over the United States and the world, the group uses their expertise and collective brainpower to locate the clandestine graves, or hidden remains, of murder victims, and find critical evidence when other means have failed the investigating agency. In doing so they are frequently exposed to the worst of humanity, as well as to the hopes, fears and sorrow of the people they’re trying to help. 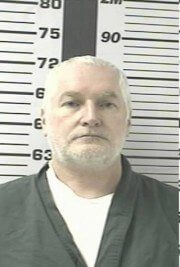 Thomas Luther, who murdered and buried Cher Elder, as he looks now

In NO STONE UNTURNED: The True Story of the World’s Premier Forensic Investigators the “worst of humanity” stories include those of serial killers and suspected serial killers Ted Bundy, Roy Melanson, Thomas Luther, and Tom and Mike McCormick, as well as a drug-dealer named Tony Emery who was willing to do whatever it took to keep a witness from testifying again him, a jealous husband in Eugene Keidel, who resorted to arson and the murder of his own children to keep his terrible secret, and even Bolshevik assassins in 1918 Russia. 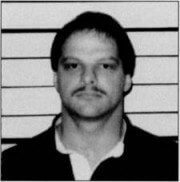 Tony Emery was convicted of murdering Christine Elkins after her body was found by NecroSearch.

Like a revolving door of true crime horror stories, the killers and their victims pass in and out of the lives of NSI members, most of whom entered their chosen fields never dreaming it would lead to someday using that knowledge to help solve murder cases. If many of them admit that they were fans of Sherlock Holmes, the Hardy Boys, or Nancy Drew in their youth–and indeed the group has been described as a “many-headed Sherlock Holmes”–that did nothing to prepare them for the brutality of real murder cases, or the grief, sorrow and desperation of victims’ families. It comes at a cost and effects them deeply; I know it does, because many of them have told me, or I’ve seen it in their faces when they talk about a case. 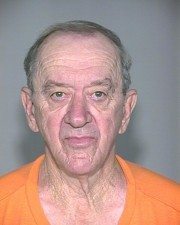 Wife- and child-killer, Eugene Keidel before his death in 2004

Yet, in spite of that cost, most of the same NSI members I met when I wrote the original edition of NO STONE UNTURNED remain with the group more than a dozen years later as I released the updated eBook version in April. They are, at times, a decidedly odd group of people who often guard their own emotional health with a dark sense of humor, and who kiddingly call themselves “crime fighters,” but with a humble pride knowing that it’s also true. They do it for the victims, for the families seeking answers, for the police investigators who invest their lives in trying to help others, and for the ultimate triumph of justice over evil.

I hope you’ll give NO STONE UNTURNED a chance. I think it will please the most avid true crime reader with gripping real-life horror stories, as well as those who enjoy television shows such as Forensic Files and CSI.

*NecroSearch International receives a portion of the proceeds from the sale of NO STONE UNTURNED.

A little before midnight on May 30, 1997, fourteen-year-old Brandy DuVall waited at a bus stop in the Denver area for a ride back to her grandparents' home after spending the evening at a friend’s home. She was wearing a bright-red Chicago Bulls … END_OF_DOCUMENT_TOKEN_TO_BE_REPLACED

FOR THE FIRST TIME IN AUDIOBOOK FORMAT! On a snowy winter evening in 1982, twenty-one-year-old Mary Brown accepted a ride from a handsome stranger in the resort town of Breckenridge, Colorado. The trip ended with her brutally beaten and raped. … END_OF_DOCUMENT_TOKEN_TO_BE_REPLACED

The Night A Twisted Fantasy Became Demented Reality They thought about their evil fantasy for months. Then, wound up like clockwork toys ... they acted. In April 1997, pretty, 22-year-old Jacine Gielinski stopped her car at a red light in … END_OF_DOCUMENT_TOKEN_TO_BE_REPLACED

From Jackson's Classic True Crime Library ROUGH TRADE NOW AVAILABLE IN eBOOK, PRINT, AND AUDIO BOOK! Early one morning in May 1997, a young couple on their way to work in the mountains of Colorado spotted what looked like a man dragging a body up … END_OF_DOCUMENT_TOKEN_TO_BE_REPLACED

The body of Anita Andrews, the owner and bartender at Fagiani’s Cocktail Lounge in Napa, California was found in her bar ... ... raped, beaten, and stabbed to death in a bloody frenzy. She’d last been seen alive the night before talking to a … END_OF_DOCUMENT_TOKEN_TO_BE_REPLACED

The Captivating "True Story Of The World's Premier Forensic Investigators" at NecroSearch International Updated and Revised! Now Available for the First Time As Kindle eBook, Audible and iTunes Editions! A body stuffed in a car trunk swallowed by … END_OF_DOCUMENT_TOKEN_TO_BE_REPLACED

Due to Sullivan’s extensive writing about Ted Bundy (which has produced six books), he’s become a sort of magnet over the years, drawing out many people who were part of the Bundy story, but have otherwise kept a low profile over the decades; and … END_OF_DOCUMENT_TOKEN_TO_BE_REPLACED

Volume One The Early Years In 1944 Brooklyn, newborn Michael J. Hardy is rejected by his mother so she can run with gangster Bugsy Siegel, Hardy’s godfather. Shirley Rook rose to the top of the criminal ranks. As the Queen of New York City … END_OF_DOCUMENT_TOKEN_TO_BE_REPLACED

This is the true story of Carmine Imbriale – a gambler, a brawler, a bandit, a bookie, an enforcer. For two decades, Imbriale was a street-level operative in one of the most violent crews in the Colombo Family, and he endeared himself to some of the … END_OF_DOCUMENT_TOKEN_TO_BE_REPLACED

Ten must track down and stop rogue scientists behind the development of criminal technology in THE HUMANZEEE EXPERIMENTS, the next installment of The 'Ten' Mystery Series! The International Security for Technological Innovations, a federal … END_OF_DOCUMENT_TOKEN_TO_BE_REPLACED

It was a dreary winter afternoon in Ayer, Massachusetts, a quintessential New England town, the type which is romanticized in Robert Frost's poems. But on January 30, 1979, a woman’s scream was heard piercing the northeast tempest wind. In an … END_OF_DOCUMENT_TOKEN_TO_BE_REPLACED