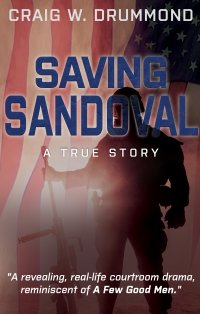 “Great book, unbelievable story. I spent 5 years in the Army and ROE and SOP’s are drummed into everyone’s head from the 1st day. It was upsetting to see what they put this kid (and his family and friends) through. Drummond deserves a handshake and a beer for his defense of what was clearly a bad situation. The book clearly walks you through the events leading to charges being brought, then clearly walks your through the defense teams actions and the trial. As upsetting as it was to read about the charges being brought, it was a relief to see that justice prevailed. Well done.” – Jason Harrington, 5 star review

“Having served myself and being sent overseas in defense of our nation on more than one occasion I can tell you this is a worst nightmare for many of us. Standard operating procedures are great but it’s impossible to cover every aspect of what we can face, and ROE — rules of engagement are often vague and really based off your instinct and read of a situation happening in real time. This did an amazing job of explaining without a lean of biased the actual happenings of the case. While I’ve heard the worst case scenario of this kind of incident it was good to see someone so hellbent on doing the right thing and providing the type of counsel we are all entitled to, not just a soldier — though also, especially a soldier. Normally not my type of read but it was engaging and paced very well and easy to take in on a lazy afternoon, I would definitely recommend it.” – Amazon Customer, 5 star review

“Armed forces continue to operate in uncertain and complex environments and this story is an insightful and powerful look into the challenges and judgments faced by a young sniper deployed to the battlefield of Iraq.” – Brigadier General Jeffery L. Underhill, U.S. Army Retired, (Iraq Veteran)

“This book is a strong caution for all military commanders who would consider judging the warriors who run towards to sound of gunfire. Front-line actions should be judged from a front-line perspective, not for how those actions may play in the news.” – Dave Earp, former U.S. Navy SEAL Officer, USNA 97, BUDS Class #230, (Iraq and Afghanistan Veteran)

“Saving Sandoval gives an inside look at the scrutiny Soldiers face on the battlefield and the politics involved in modern day warfare.” – Major Chris Ophardt, U.S. Army, Public Affairs Officer to the Secretary of the Army, 2016-2017, (Iraq Veteran)

It's the holidays again! You're probably searching for and picking out the perfect present for everyone on your list. Consider this your reminder to treat yourself to something nice this holiday season, like free audiobooks with our Holiday Audiobook … END_OF_DOCUMENT_TOKEN_TO_BE_REPLACED

It's always a good day for free audiobooks! That's right! Free audiobooks! Just a gift from us to you, our readers.   Browse by genre and select the cover to get more information and your free copy! Non-Fiction True Crime Business … END_OF_DOCUMENT_TOKEN_TO_BE_REPLACED

We know how hard 2020 has been. To help you end the year on a better note, we wanted to give you the gift of free audiobooks! Hence, the Holiday 2020 Audiobook Giveaway! You're probably thinking of gifts for others right now, like we always do during … END_OF_DOCUMENT_TOKEN_TO_BE_REPLACED

"Great book, unbelievable story. I spent 5 years in the Army and ROE and SOP's are drummed into everyone's head from the 1st day. It was upsetting to see what they put this kid (and his family and friends) through. Drummond deserves a handshake and a … END_OF_DOCUMENT_TOKEN_TO_BE_REPLACED

Saving Sandoval is the true account of the defense of U.S. Army Specialist Jorge G. Sandoval, Jr. Sandoval, a 22-year old infantry paratrooper deployed to the forward operating base of Iskan during the enemy uprisings of 2007 in Iraq. Iskan was … END_OF_DOCUMENT_TOKEN_TO_BE_REPLACED

After a beaten Japan surrendered to the United States and its World War II allies in 1945, a little-known peninsula, home to 30 million Korean people, was dangling leaderless from the Asian continent into the Yellow Sea. Treated as an afterthought in … END_OF_DOCUMENT_TOKEN_TO_BE_REPLACED

"Dodge takes us behind the headlines and introduces real people and their very real struggles yearning to breathe free. Page-turning, proactive and highly recommended"--Craig McGuire, author of BROOKLYN'S MOST WANTED The United States has a long … END_OF_DOCUMENT_TOKEN_TO_BE_REPLACED

Saving Sandoval is the true account of the defense of U.S. Army Specialist Jorge G. Sandoval, Jr. Sandoval, a 22-year old infantry paratrooper deployed to the forward operating base of Iskan during the enemy uprisings of 2007 in Iraq. Iskan was … END_OF_DOCUMENT_TOKEN_TO_BE_REPLACED

At last a book about the so-called “Mad Monk” of Imperial Russia that lays to rest the myths and reveals the truth about one of the most controversial characters in human history while exploring the impact his murder had on a dynasty, a people, and a … END_OF_DOCUMENT_TOKEN_TO_BE_REPLACED

Some Cases You Solve. Some Cases You Survive. Naval Criminal Investigative Service Special Agent, Tyrone Benhoff is in purgatory. That’s what agents call it when they find themselves on the wrong side of command and are transferred to a place … END_OF_DOCUMENT_TOKEN_TO_BE_REPLACED

New from award-winning author Terry Persun! After the murder of his wife and unborn child, the only time freelance tech investigator Ten feels alive is when he cuts himself. For the last few years, he has taken freelance investigative jobs. Some of … END_OF_DOCUMENT_TOKEN_TO_BE_REPLACED

Coming January 29th to REELZChannel™! The DEADLY ASSOCIATES documentary! Step into Chicago during the 1960s and ‘70s, where mobsters influence everyone from strip-club owners to Teamsters, aldermen, judges, and local police. It is a world where … END_OF_DOCUMENT_TOKEN_TO_BE_REPLACED

"Lizzette Martinez’s story embodies the fire energy that gives light and life to survivors all around her! Survivors need to see strength and perseverance despite opposition, and Lizzette models just that." - Melissa Schuman, actress and singer In … END_OF_DOCUMENT_TOKEN_TO_BE_REPLACED

Soon To Be A Documentary Series! My name is Suzanne Buchanan. There is an active arrest warrant for me in Thailand for articles I published on "The Backpacker Murders" as the former owner and editor of the Samui Times. I am a British citizen and had … END_OF_DOCUMENT_TOKEN_TO_BE_REPLACED

In this true crime-flavored novel, Detective William Boyett is called out on Mardi Gras evening in Mobile, Alabama to investigate the discovery of a young woman’s body wrapped in a carpet in a vacant lot a few blocks from the parade route. Over … END_OF_DOCUMENT_TOKEN_TO_BE_REPLACED