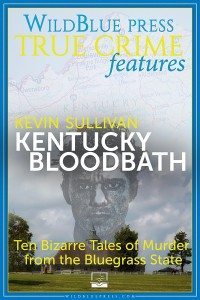 Ten Bizarre Tales of Murder From The Bluegrass State. Readers who find themselves turning the pages of this new work from the author of VAMPIRE: The Richard Chase Murders are in for a real excursion into the weird and the bizarre: from a medieval-esque murder in a small town museum to the jilted boyfriend who decided that his former girlfriend needed to die on her twenty-first birthday.

And then there’s the demented son who returns home to live with his mother and stepfather, and one night in their beautiful mansion sitting atop a high bluff overlooking the Ohio River, slaughters them. Each case will keep you on the edge of your seat.

“A well-written book of grime that every true crime reader must have on their shelves or reading device. Compelling and captivating.”—RJ Parker, bestselling author of Serial Killers Abridged Encyclopedia, Serial Killer Groupies and more.

“I found this book kept me turning pages and in suspense as the stories evolved. It’s a must read.”—Marlene Fabregas, avid true crime reader 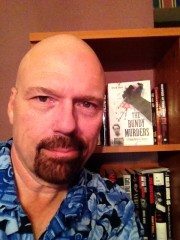 From the Author: Having grown up reading true crime, it wasn’t at all surprising that one day after I’d begun my writing career that I dove into true crime, putting onto pages those strange and terrible events that are part and parcel of this macabre world. And so, after finishing a book on George Armstrong Custer – a personality study of the man -,I turned towards true crime, knowing there was much to write about in my home state of Kentucky.

I was also aware, that, to my knowledge, no previous writer in the state had ever conducted such a thorough search for strange Kentucky murders such as I was undertaking.

As I began my research into past Kentucky killers and their victims, I was well aware there were a good number of very unusual homicides from the Bluegrass State, as I’d read about them over the years in newspapers accounts, heard the strange tales from relatives and friends, or watched the occasional newscasts on TV (remember: “If it bleeds it leads!”).

KENTUCKY BLOODBATH will keep you on the edge of your seat!

But these sources were never in-depth studies of the cases in question; and worse still, very often, erroneous information came forth, and it wasn’t until I began the research, using the original case files, that I’d find out what really happened. And it would be in these moments of discovery, that an accurate picture of each individual tragedy would rise and take shape from the seemingly innumerable police reports and interviews of those involved. 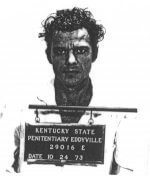 Prepare to be shocked when KENTUCKY BLOODBATH launches June 2!

Indeed, many of the stories I’ve “unearthed” would have been lost forever had I not sought them out from the dusty archives and storage facilities scattered throughout the state; stories that would, ultimately, be destined for obscurity and eventual disposal as the decades dragged on.

Recently, one radio interviewer, contemplating their bizarre aspects, quite rightly stated how all of these Kentucky murders resembled something out of The Twilight Zone, and I quickly had to agree with his assessment. That’s the nature of these cases, and frankly, it was what I was looking for in my quest to uncover true crime in Kentucky.

“I really enjoyed reading this book. … Once I started to read … I found I couldn’t stop until I got to the last page.”—Charlotte Ellis, avid true crime reader

From “Death By Sword: “Gowin liked rough sex, and it was important for him, at least during intercourse, to pretend he was someone else: a doctor, soldier, or someone with authority, and sometimes he would pretend to rape her while holding an imaginary knife to her throat.  His girlfriend also mentioned his personality could change from good to bad very quickly: “One minute he would be a very kind and considerate person.  The next minute he would be talking about killing somebody or cutting somebody’s head off.”

From “Blood In The Moonlight: “As Bauer led the officer to the side door where they entered the house through the kitchen, Kendrick asked if he knew who’d done this, and Bauer said, “No.”  Just before stepping inside the home, Kendrick radioed the Emergency Medical Services unit, telling them to continue on to this address – code 3 – and that homicide units should be sent as well.  Having notified dispatch, Kendrick then drew his weapon and entered a nightmare.

Kevin Sullivan is also the author of VAMPIRE: The Richard Chase Murders from WildBlue Press and THE BUNDY MURDERS.

The Encyclopedia of the Ted Bundy Murders lists the names of hundreds of people involved in the case as well as dozens of locations where significant events occurred.  Being the final installment in a five-volume series, this veritable “Who’s Who” of … END_OF_DOCUMENT_TOKEN_TO_BE_REPLACED

Ted Bundy's Murderous Mysteries is a deep-dive into the archival record of the America’s most notorious serial killer. It’s a veritable goldmine of information on Bundy, his victims, and this very voluminous case. Written by the foremost authority … END_OF_DOCUMENT_TOKEN_TO_BE_REPLACED

THE TRAIL OF TED BUNDY: Digging Up the Untold Stories A look into the life of serial killer Ted Bundy, from those who knew him, to those who chased him, and from those who mourned his many victims... The Trail of Ted Bundy: Digging … END_OF_DOCUMENT_TOKEN_TO_BE_REPLACED

"All I ever wanted was to love women, and in turn to be loved by them back. Their behavior towards me has only earned my hatred, and rightfully so! I am the true victim in all of this. I am the good guy. Humanity struck at me first by condemning me … END_OF_DOCUMENT_TOKEN_TO_BE_REPLACED

Having abstained from killing for almost a year, the Highwayman is coming unglued. Unsure if the FBI is watching, Lance Belanger spends his days and nights in a paranoid malaise, longing to kill again. Meanwhile, in Bucharest, Romania, an … END_OF_DOCUMENT_TOKEN_TO_BE_REPLACED

Maybe the youngest son of a violent criminal named Hoggy Thompson was born a beast. Maybe rage was beaten into him. One thing was certain, by the time he reached manhood, Jerry Thompson was a savage killer. He had no conscience about rape, child … END_OF_DOCUMENT_TOKEN_TO_BE_REPLACED

Marty Croft has it all. A beautiful wife, and a successful career as a commercial artist. That is until his past comes back to haunt him. Enter Gordon Shamus, the psychotic son of Marty’s former gangster boss. After Marty’s wife is kidnapped, he … END_OF_DOCUMENT_TOKEN_TO_BE_REPLACED

Is there a sociopathic killer on the loose and murdering prostitutes in New York City?  NYPD’s top cop, Homicide Commander Lieutenant John Driscoll, believes there is.  Someone who calls himself “Tilden” and claims to have been sexually … END_OF_DOCUMENT_TOKEN_TO_BE_REPLACED

The World Encyclopedia of Serial Killers is the most comprehensive set of its kind in the history of true crime publishing. Written and compiled by Susan Hall, the four-volume set has more than 1600 entries of male and female serial killers from … END_OF_DOCUMENT_TOKEN_TO_BE_REPLACED

Terrifying things are happening to Kay Weden, a forty-something single mom and high school teacher in Salisbury, North Carolina. Despite having no known enemies, Kay’s home, car, and peace of mind are under attack throughout 1993. Most chilling … END_OF_DOCUMENT_TOKEN_TO_BE_REPLACED