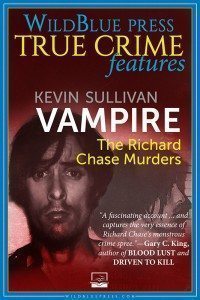 VAMPIRE is the tale of a diabolical, homicidal madman running amok, mutilating and murdering the unsuspecting residents in the quiet neighborhoods of Sacramento, CA. His diabolical and unrelenting desires, not just to kill his victims but to drink their blood, unleashed a terror within the city unlike anything the residents had ever known.

VAMPIRE: The Richard Chase Murders is an in-depth look into the life and disturbed mind of a killer, his family, and his many victims, the living as well as the dead. Within these pages you'll discover what it was like for the police, and what a difficult job they had finding a killer they knew wouldn't stop until he was apprehended. It was a race against time, in a series of murders that would stun even the most hardened investigators. It is the story of a city under siege, held captive by the man whose appetite for blood could not be satiated.

About the book:
By the time Richard Trenton Chase graduated high school, everyone knew he was strange. But no one had any idea how bizarre he'd become, or what dark impulses were flowing through his troubled brain. The transformation from the outwardly strange young man to the diabolical killer he ultimately became, was gradual and would not become known until it was too late. First it was the killing of small animals and birds, and the drinking of their blood. However, when these sacrifices failed to satiate his needs, Richard Chase would seek out the highest form of life, and the city of Sacramento, California would react in horror to the hideous murders and mutilations committed by his hands. For those living in the quiet neighborhoods where the murders occurred, it was nothing less than a time of terror until the fiend was captured.

From the book:
“On August 3, Richard Chase was sitting in the hot sun along a rocky area of Pyramid Lake, Nevada, some two hundred miles from Sacramento. He was completely naked and was covered in blood. He wasn’t in a hurry, just sitting there. Approximately one-half to three-quarters of a mile away (and across the lake) sat his Ford Ranchero. Inside the vehicle were two rifles, a .22 caliber and a Marlin .30-30 lever-action. Both weapons had blood on them, as did most of the inside of the vehicle. There was a white bucket, too, which contained blood and a liver.”

Reviews:
"The Richard Chase Murders by veteran true crime writer and historian, Kevin Sullivan, is fraught with emotion and detail. I always admire an author who dedicates their project to the victims, and tells about who they were and not just the crime against them. This is a well-written book that was researched in person and facts gleaned from key players during and after the Chase murders. A must have book for all true crime enthusiasts or book collectors."-- RJ Parker, award-winning true crime author and publisher at RJ Parker Publishing Inc.

"Sullivan has written a fascinating account of an abnormal psyche of egregious proportions, and captures the very essence of Richard Chase's monstrous crime spree the citizens of Sacramento will never forget."--Gary C. King, author of BLOOD LUST and DRIVEN TO KILL

"Although it's been over three decades since Richard Trenton Chase went on his killing spree, he still stands out as one of the most bizarre serial killers in America. Kevin Sullivan pulls out more information from interviews and old files than has been previously published, which will interest true crime fans and criminologists alike. His painstaking account presents the evolution of a delusional coldblooded killer."--Katherine Ramsland, bestselling author of PSYCHOPATH and THE IVY LEAGUE KILLER

From the author:
Writing the story of Richard Chase was both fascinating and appalling. Fascinating, because once the horrific murders began, it was literally a race against time for the police as they worked tirelessly to stop the slaughter, and appalling, due to the fiendish nature of the crimes being committed by this strange, and for a time, very elusive killer. Visiting the sites of these murders, and following closely the trail of Richard Chase in the spring of 2012 while conducting research for the book, gave me at least a “feel” for what it must have been like during that hellish period in Sacramento's history.

A 1986 family tragedy propels this gripping true crime debut as a mother searches for answers in the shocking murder of her husband—and conviction of her son. For years, Cherie struggles to overcome the consuming grief she suffers from the loss of … END_OF_DOCUMENT_TOKEN_TO_BE_REPLACED

It was a dreary winter afternoon in Ayer, Massachusetts, a quintessential New England town, the type which is romanticized in Robert Frost's poems. But on January 30, 1979, a woman’s scream was heard piercing the northeast tempest wind. In an … END_OF_DOCUMENT_TOKEN_TO_BE_REPLACED

Due to Sullivan’s extensive writing about Ted Bundy (which has produced six books), he’s become a sort of magnet over the years, drawing out many people who were part of the Bundy story, but have otherwise kept a low profile over the decades; and … END_OF_DOCUMENT_TOKEN_TO_BE_REPLACED

Volume One The Early Years In 1944 Brooklyn, newborn Michael J. Hardy is rejected by his mother so she can run with gangster Bugsy Siegel, Hardy’s godfather. Shirley Rook rose to the top of the criminal ranks. As the Queen of New York City … END_OF_DOCUMENT_TOKEN_TO_BE_REPLACED

Jerry Marcus fooled them all. He was “a nice guy,” always helped at home, did well in school, an athlete, and always employed. When things went wrong, he was the first to help clean up the mess. He was the last person anyone suspected of being a … END_OF_DOCUMENT_TOKEN_TO_BE_REPLACED