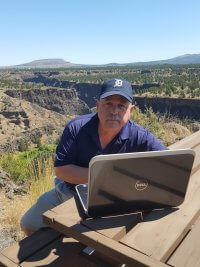 William Florence is the author of the Max Blake Mysteries series, which currently features five titles: Raptor’s Ridge, Misery Ridge, Faraway Ridge, Snowfall Ridge, and Emerald Ridge. A former reporter, editor, and college professor, he worked at newspapers in Michigan, Washington, D.C., South Dakota, Indiana, and Oregon for 25 years and for 22 years as a journalism and writing instructor at a community college.

He has won various writing awards in four states. His work was published nationally in such widely read industry magazines as The Bulletin for the American Society of Newspaper Editors and APME News for the Associated Press Managing Editors group, and for noted travel publications such as Arizona Highways and Michigan Living.

William Florence with his wife, Linda, at Monument Valley

He is a student of Western lore, is knowledgeable about the customs and history of the Old West, and is especially well versed in the firearms that were used during this colorful period. An avid photographer, he travels extensively through out the Western United States. In his spare time, he writes the Max Blake: Federal Marshal series of Westerns.

Mr. Florence attended colleges in Michigan and Ireland. He is a voracious reader and movie aficionado. He is married and has two adult children. His wife, Linda, is his toughest critic and his best friend.

It's the holidays again! You're probably searching for and picking out the perfect present for everyone on your list. Consider this your reminder to treat yourself to something nice this holiday season, like free audiobooks with our Holiday Audiobook … END_OF_DOCUMENT_TOKEN_TO_BE_REPLACED

It's always a good day for free audiobooks! That's right! Free audiobooks! Just a gift from us to you, our readers.   Browse by genre and select the cover to get more information and your free copy! Non-Fiction True Crime Business … END_OF_DOCUMENT_TOKEN_TO_BE_REPLACED

We know how hard 2020 has been. To help you end the year on a better note, we wanted to give you the gift of free audiobooks! Hence, the Holiday 2020 Audiobook Giveaway! You're probably thinking of gifts for others right now, like we always do during … END_OF_DOCUMENT_TOKEN_TO_BE_REPLACED

Hang onto your shamrocks and shillelaghs, folks. Max Blake, that hard-boiled private detective and former muck-raking journalist, along with his fearless fiancée Caeli Brown, are back in action and up to their Walther P99s in slick hypnotic robberies … END_OF_DOCUMENT_TOKEN_TO_BE_REPLACED

In 2018, WildBlue Press released 29 new titles! Among those titles, twenty-one were under the true crime genre, four were thrillers, two mysteries, and one business book as well as one fantasy book. From winning awards to being featured on … END_OF_DOCUMENT_TOKEN_TO_BE_REPLACED

Anne K. Howard’s HIS GARDEN has been featured on news outlets such as AuthorsReading.com, NBC Connecticut, People.com, AETV.com, and The New Britain Herald. William Florence, author of RAPTOR’S RIDGE, has had work published nationally in … END_OF_DOCUMENT_TOKEN_TO_BE_REPLACED

New from award-winning author Terry Persun! After the murder of his wife and unborn child, the only time freelance tech investigator Ten feels alive is when he cuts himself. For the last few years, he has taken freelance investigative jobs. Some of … END_OF_DOCUMENT_TOKEN_TO_BE_REPLACED

In this true crime-flavored novel, Detective William Boyett is called out on Mardi Gras evening in Mobile, Alabama to investigate the discovery of a young woman’s body wrapped in a carpet in a vacant lot a few blocks from the parade route. Over … END_OF_DOCUMENT_TOKEN_TO_BE_REPLACED

Hang onto your shamrocks and shillelaghs, folks. Max Blake, that hard-boiled private detective and former muck-raking journalist, along with his fearless fiancée Caeli Brown, are back in action and up to their Walther P99s in slick hypnotic robberies … END_OF_DOCUMENT_TOKEN_TO_BE_REPLACED

In this prequel to the exciting Max Blake Mystery books, Emerald Ridge and Melia Ridge, a mild-mannered college professor becomes an unlikely candidate to hunt down the killer of the town’s richest man and his movie star paramour. But as things … END_OF_DOCUMENT_TOKEN_TO_BE_REPLACED

When northern California’s idyllic Napa Valley is shattered by the vineyard shooting deaths of two men, investigative-reporter-turned-wine-editor Dante Rath seizes the chance to salvage his sagging career. One of the dead is the winery’s top … END_OF_DOCUMENT_TOKEN_TO_BE_REPLACED

Hang on! Just a minute! When last we checked in with hard-boiled private eye and former muck-raking journalist Max Blake and his intrepid fiancee, Caeli Brown, they were traveling across the entirety of Ireland to find her Uncle Jack, only to see him … END_OF_DOCUMENT_TOKEN_TO_BE_REPLACED

How do you go about fixing a problem that doesn't want to be fixed? Private detective Max Blake and his intrepid fiancée, Caeli Brown, battle this conundrum in a new addition to the series of mysteries by author William Florence. Caeli's Uncle Jack, … END_OF_DOCUMENT_TOKEN_TO_BE_REPLACED

After his sister’s death sends him into the loving arms of God, Paleontology Professor Travis Perego fights to reconcile the career he’s devoted his life to with his fragile new faith. His struggle between evolutionary theory and the Bible soon … END_OF_DOCUMENT_TOKEN_TO_BE_REPLACED

Some Cases You Solve. Some Cases You Survive. Naval Criminal Investigative Service Special Agent, Tyrone Benhoff is in purgatory. That’s what agents call it when they find themselves on the wrong side of command and are transferred to a place … END_OF_DOCUMENT_TOKEN_TO_BE_REPLACED

New from award-winning author Terry Persun! After the murder of his wife and unborn child, the only time freelance tech investigator Ten feels alive is when he cuts himself. For the last few years, he has taken freelance investigative jobs. Some of … END_OF_DOCUMENT_TOKEN_TO_BE_REPLACED

Coming January 29th to REELZChannel™! The DEADLY ASSOCIATES documentary! Step into Chicago during the 1960s and ‘70s, where mobsters influence everyone from strip-club owners to Teamsters, aldermen, judges, and local police. It is a world where … END_OF_DOCUMENT_TOKEN_TO_BE_REPLACED

"Lizzette Martinez’s story embodies the fire energy that gives light and life to survivors all around her! Survivors need to see strength and perseverance despite opposition, and Lizzette models just that." - Melissa Schuman, actress and singer In … END_OF_DOCUMENT_TOKEN_TO_BE_REPLACED

Soon To Be A Documentary Series! My name is Suzanne Buchanan. There is an active arrest warrant for me in Thailand for articles I published on "The Backpacker Murders" as the former owner and editor of the Samui Times. I am a British citizen and had … END_OF_DOCUMENT_TOKEN_TO_BE_REPLACED

In this true crime-flavored novel, Detective William Boyett is called out on Mardi Gras evening in Mobile, Alabama to investigate the discovery of a young woman’s body wrapped in a carpet in a vacant lot a few blocks from the parade route. Over … END_OF_DOCUMENT_TOKEN_TO_BE_REPLACED