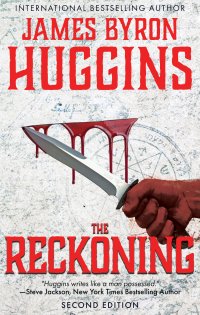 HAUNTED BY HIS PAST

In a world ruled by the purest survivors, the fiercest warriors, Gage was the strongest – an American executing his country’s darkest missions with legendary cunning and skill. Until, wounded and dying in a scorched wasteland, he found mercy at the hands of an aging priest. Separated from the secret world he once dominated, he chose a life of exile, pursuing a lonely peace, a solitary faith. Only the murder of his mentor and the mysterious theft of an ancient manuscript can compel him to emerge from solitude.

HUNTED BY A DEADLY FORCE

Now his greatest battle begins. From the shadowed streets of New York to the inner recesses of the Vatican and beyond, he challenges the awesome might of an ageless evil. Bound by a promise to a dying friend, he wages war once more in the dark world he left behind.

WildBlue Press has put together a series of three videos describing the knife that Jim Hammond had designed for Huggins, a description from world-renowned martial arts expert James Advincula about his participation in the writing of THE RECKONING, and Huggins’ describing how it all came together in the book.

Video 1: Jim Hammond discusses The Dragon, the knife he designed for Huggins’ book THE RECKONING. – https://www.youtube.com/watch?v=z2NYv_HUvd4

Video 2: James Advincula discusses his participation in THE RECKONING and the relevance of his martial arts perspective. – https://www.youtube.com/watch?v=lFtQX8leS4w

Video 3: James Byron Huggins discusses THE RECKONING and the participation of Hammond and Advincula. – https://www.youtube.com/watch?v=EBLVLEkF93E

Father Stanford Aquanine D’Oncetta shook his head patiently as he casually removed a cigar from the darkly-illuminated Savinelli humidor.

“No, Robert, he is not dead,” replied D’Oncetta calmly. “But there is no need for emotion. He will be dead soon enough.”

“Not soon enough for me.”

Stately and imperious, D’Oncetta laughed. Drawing steadily upon a vigilance candle to light his cigar, the priest leaned back against a mahogany desk, slowly releasing a stream of pale blue smoke.

Separated from D’Oncetta by the length of the library, Robert Milburn regarded the priest in the dim light. Reluctantly impressed by D’Oncetta’s authoritative appearance, Milburn noted the deeply tanned hands and face of a man who had actually spent little of his life in dark confessionals or chapels.

The face of this man commanded true power and feared nothing at all.

Above the clerical collar and the black, finely tailored robe, D’Oncetta’s straight white hair laid back smoothly from his low forehead, lending him the demeanor of an elder statesman. Everything about the priest was richly impressive, dignified, cultured and refined – an investment banker wearing the robe of a holy father.

“What are you so afraid of, Robert?” D’Oncetta laughed in his voice of quiet authority, a voice accustomed to controlling and persuading. “How many men is it that you have stationed outside?”

“And is that not enough to guard a single, isolated mansion in Westchester, especially with the noble assistance of New York’s vaunted police force that even now has a priority patrol on surrounding streets?”

D’Oncetta smiled reassuringly and exhaled again, savoring. Then he looked down at the cigar, turning it in his fingers with familiar approval.

“A Davidoff,” he remarked fondly. “Rich and complex. Always the result of superior breeding. And it’s not even Cuban, as one might presume, but a product of the Dominican Republic.”

D’Oncetta’s satisfied gaze focused on Milburn. “Would you like to try one?”

Turning his back to the priest, Milburn moved to the uncurtained picture window. He stared past the mansion’s carefully manicured lawn and into the shadowed night beyond. 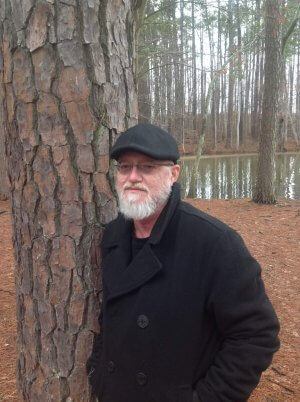 “I just want that old man upstairs to die so we can all get out of here.” Control made his voice toneless. “I don’t like this, D’Oncetta. If Gage is really out there, like your people say he is, then we should just leave the old man alone. Because if Gage claims the old man as family … If he’s put Father Simon under his protection, then Gage will come for him. And if that happens…” Milburn paused, turning coldly toward the priest. “You don’t have any idea what you’re dealing with.”

“But that is why you are here, isn’t it, Robert?” D’Oncetta responded tolerantly, and Milburn suspected a faint mocking tone. “It is your solemn responsibility to deal with such matters. And there is much that remains, for this is simply the beginning. There are even more delicate tasks which will require your skills in the near future. Tasks which, through the centuries, have always demanded men such as yourself. Men deeply inured and intimately familiar with the higher arts. Men who can insure the success of our plans while simultaneously protecting us all from this individual that you seem to respect, or fear, so profoundly.”

“Yes, Robert, that is why we need superb field operatives such as yourself. And that is why you and your men will remain here, guarding us all so efficiently, until Father Simon is dead. We do not want him disturbed in his final, tragic hours, do we?”

Milburn took his time to reply.

Milburn looked again out the window. Shadows completely cloaked the darkened wood line, untouched by the security lights illuminating the surrounding lawn. Training told him not to look for the faint outline of sentries concealed within the obscured trees, so Milburn allowed his gaze to wander, unfocused, receptive to discerning movement where shape could not be seen.

But there was nothing.

He turned nervously toward D’Oncetta.

“How much longer will it take?”

Black and stately, the priest shrugged.

“An hour,” he said with supreme composure. “Perhaps less. The chemical is quite painless and, I might add, undetectable. Not that we shall have to worry. Validating documents have already been executed. There shall be no confirmation of peculiarity. So it will be tragic, but natural. For, as you know, Robert, all of us are destined to die.”

D’Oncetta released another draw from the Davidoff and smiled again, this time plainly amused. And Milburn made a decision, releasing some of his tension by taking a slow and threatening step across the library.

The priest watched Milburn’s measured step with calm detachment. And when Milburn was face to face with D’Oncetta, he stopped as if he had always intended to stop, emotions tight once more. But as Milburn stood close to the priest he felt a sudden strangeness in the moment, in the tension, and he heard the question coming out of himself before regret could silence it.

“Who are you, D’Oncetta?” he asked quietly in a voice of unbelief no matter what the answer.

Milburn’s face was a rigid mask. Slowly he turned away and lifted a small radio from his coat: “Command post. Perimeter check.”

One by one, unseen guards responded.

“Command clear.” Milburn lowered the radio to his side, refusing to look at D’Oncetta again. But he knew the priest maintained his air of amused calm.

“There, you see, Robert. We are all quite safe.”

THE RECKONING by James Byron Huggins

Listen To An Audiobook Sample Of THE RECKONING

"O'Callaghan is back with a vengeance ..." -- Gregg Olsen, #1 New York Times bestselling author Is there a sociopathic killer on the loose and murdering prostitutes in New York City?  NYPD’s top cop, Homicide Commander Lieutenant John … END_OF_DOCUMENT_TOKEN_TO_BE_REPLACED

Tourism in New York City is under siege.  Visitors to the Big Apple have become targets of vengeful twins hell bent on exacting punishment on total strangers to right the hellacious wrongs perpetrated against them in a hellhole they called … END_OF_DOCUMENT_TOKEN_TO_BE_REPLACED

A sociopathic killer is using the internet to lure seemingly random women to their gruesome deaths in New York City.  During his heinous murderous spree this madman is extracting the bones of his victims.  His sheer brutality has the … END_OF_DOCUMENT_TOKEN_TO_BE_REPLACED

In an experiment to discover what secrets are hidden within the infinite vastness of the galaxy, scientists create a machine so powerful that it rips a hole through space and time. But instead of revealing the dark world of their own universe the … END_OF_DOCUMENT_TOKEN_TO_BE_REPLACED

What would a mad mullah actually do with a weapon of mass destruction? Simple. He would use it.   Derek Martell is in a dead end career, manning a fuel point in Eastern Iraq. It’s a far fall from a life of fortune and glory, but he’s … END_OF_DOCUMENT_TOKEN_TO_BE_REPLACED

In the backcountry of Idaho, a tribe of men are hunting and killing with a dream of returning the world to an earlier time. A time when courage and prowess in the field determined a man’s worth. A time when the strong took what they wanted, and … END_OF_DOCUMENT_TOKEN_TO_BE_REPLACED

On an Icelandic Island, an illegal experiment intended to create the perfect biological weapon has transformed a once-innocent creature into the biblical Leviathan that once terrorized the world. Able to shatter steel and granite as easily as it can … END_OF_DOCUMENT_TOKEN_TO_BE_REPLACED

Pilot Jake Silver is haunted by a cruel irony—he secretly suspects that he’s the reason Swede Bergstrom, the hero who saved his life, has fallen on hard times. Upon learning that Swede has been killed during the commission of a crime, the … END_OF_DOCUMENT_TOKEN_TO_BE_REPLACED

INCLUDES OVER 40 COLOR PHOTOGRAPHS! Frank Cullotta was best known for his exploits as an associate of the Chicago Outfit and his role as Tony Spilotro’s enforcer and street lieutenant in Las Vegas. However, he had another interest besides crime. … END_OF_DOCUMENT_TOKEN_TO_BE_REPLACED

What do Wyatt Earp, Belle Gunness, Big Foot the Renegade, Billy the Kid, and Dr. H.H. Holmes, and The Black Hand have in common? They were all subjects of true crime newspaper reporting in the 1800s, and now these stories and that of many others … END_OF_DOCUMENT_TOKEN_TO_BE_REPLACED

Will A Serial Killer Soon Walk The Streets Again? Don Miller was quiet and reserved.  As a former youth pastor, he seemed a devout Christian.  No one would have ever suspected that the recent graduate of the Michigan State University … END_OF_DOCUMENT_TOKEN_TO_BE_REPLACED

As the adopted son of two cult leaders, Benjamin Risha was raised to someday assume a place of leadership in the Tony and Susan Alamo Christian Foundation with the Bible, and his parents’ interpretation of it, as his guide. He believed the prophecies … END_OF_DOCUMENT_TOKEN_TO_BE_REPLACED