Get THE RISE AND FALL OF A CASINO MOBSTER
eBook 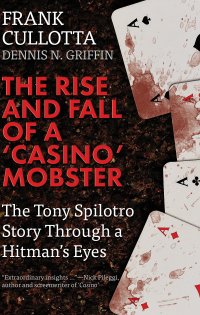 THE RISE AND FALL OF A ‘CASINO’ MOBSTER will be available from WildBlue Press on April 26th, 2017! Pre-order your copy today to save!

The Chicago organized crime family known as the “Outfit” dates back to the reign of the infamous Al Capone and prohibition. As the years passed and prohibition was repealed, Outfit bosses had to adapt and seek new ways to make money illegally. One of those was the expanding gambling and entertainment oasis in the desert: Las Vegas. A lot of cash passed through the Vegas casinos and the mobsters devised a way to get some of it, using a process that came to be known as “the skim.”

To protect their interests, the Outfit sent an enforcer to Sin City in 1971 He was to make sure their casino operations ran smoothly and deal with interlopers, employees who were skimming the skim and other troublemakers, by any means necessary.

His name was Tony Spilotro. To help him run his empire Tony imported several heavies from Chicago. Among them was his childhood friend Frank Cullotta, who would function as Tony’s street lieutenant. His assignment was to assemble a crew of thieves, arsonists and killers to provide muscle for Tony as necessary, and carry out lucrative burglaries and robberies that Tony brought to their attention. Frank and his crew were dubbed by the news media as the Hole in the Wall Gang.

The Spilotro era in Vegas was dramatized in the 1995 blockbuster movie Casino, in which Joe Pesci played a character based on Spilotro. Character actor Frank Vincent played “Frankie,” based on Frank Cullotta. The real Frank Cullotta was a technical consultant to the film and appeared in several scenes as a hit man. As screenwriter Nick Pileggi said, “Without Frank Cullotta there would have been no Casino.”

Dennis Griffin and Frank Cullotta, co-authors of THE RISE AND FALL OF A ‘CASINO’ MOBSTER, in 2007

In THE RISE AND FALL OF A ‘CASINO’ MOBSTER, Frank tells the true story of Tony Spilotro, his rise up the ladder to become an Outfit boss, his subsequent fall from power and murder at the hands of the Outfit. Frank also talks about the many murders Tony committed, ordered or planned. In several instances Frank names the killers in cases that are officially unsolved. It’s a story that only Frank Cullotta could tell.

“I was a little nervous before my first meeting with former mobster Frank Cullotta. It turned out we had a pleasant conversation that ended with an agreement for me to write his book. As I drove home I realized I had made a deal with a career thief and killer on a handshake. What was I thinking?” – Author Denny Griffin

Lisner then led the way toward the rear of the house to check the backyard. As we passed through the dining room I pulled my gun. I fired two rounds into the back of Lisner’s head from point-blank range. Instead of going down, he turned around and said, “What the…why?” Then he started to run through the house toward the garage.

I caught up with him and emptied the rest of the bullets into his head. He fell, but was still alive, still moving. I had trouble believing what was happening. I got on top of Lisner and held him down while looking around the room for something to use as a weapon. I saw a knife on a counter next to the door leading to the garage and made a grab for it; it was just out of reach. Next I spotted an electric water cooler that was within my grasp. I ripped the cord out of the cooler to strangle Lisner with, but when I wrapped it around his neck the cord broke. Unbelievable!

I got up and dragged Lisner into the den. He was still conscious and aware of what was going on. “My wife knows you’re here! She’s going to know you did this!” he said.

At that time Wayne came into the house; he was carrying an extra magazine of ammo with him. I reloaded the gun, put pillows from a couch over Lisner’s head to muffle the gunshots and emptied it into his head again. It had taken ten fucking rounds, but Lisner was finally dead. We dragged him outside to the pool and dumped him in. The body float ed for a few seconds, then sank to the bottom.

“A gritty first-hand, front-lines perspective of both the Chicago and Las Vegas underworlds. Not only does Cullotta know where the bodies are buried, but he shares what they did and how they got there.”–Craig McGuire, author of BROOKLYN’S MOST WANTED

THE RISE AND FALL OF A ‘CASINO’ MOBSTER

Buy THE RISE AND FALL OF A ‘CASINO’ MOBSTER Now:

It's the holidays again! You're probably searching for and picking out the perfect present for everyone on your list. Consider this your reminder to treat yourself to something nice this holiday season, like free audiobooks with our Holiday Audiobook … END_OF_DOCUMENT_TOKEN_TO_BE_REPLACED

It's always a good day for free audiobooks! That's right! Free audiobooks! Just a gift from us to you, our readers.   Browse by genre and select the cover to get more information and your free copy! Non-Fiction True Crime Business … END_OF_DOCUMENT_TOKEN_TO_BE_REPLACED

We know how hard 2020 has been. To help you end the year on a better note, we wanted to give you the gift of free audiobooks! Hence, the Holiday 2020 Audiobook Giveaway! You're probably thinking of gifts for others right now, like we always do during … END_OF_DOCUMENT_TOKEN_TO_BE_REPLACED

INCLUDES OVER 40 COLOR PHOTOGRAPHS! Frank Cullotta was best known for his exploits as an associate of the Chicago Outfit and his role as Tony Spilotro’s enforcer and street lieutenant in Las Vegas. However, he had another interest besides … END_OF_DOCUMENT_TOKEN_TO_BE_REPLACED

WildBlue Press author and former gangster, Frank Cullota died on August 20, 2020. Although he had a fearsome reputation from his days as a hitman for Mob boss Tony Spilotro, many others knew a different side--gentle, warm, engaging. Among them … END_OF_DOCUMENT_TOKEN_TO_BE_REPLACED

Soon To Be A Documentary Series! My name is Suzanne Buchanan. There is an active arrest warrant for me in Thailand for articles I published on "The Backpacker Murders" as the former owner and editor of the Samui Times. I am a British citizen and had … END_OF_DOCUMENT_TOKEN_TO_BE_REPLACED

Coming January 29th to REELZChannel™! The DEADLY ASSOCIATES documentary! Step into Chicago during the 1960s and ‘70s, where mobsters influence everyone from strip-club owners to Teamsters, aldermen, judges, and local police. It is a world where … END_OF_DOCUMENT_TOKEN_TO_BE_REPLACED

"Lizzette Martinez’s story embodies the fire energy that gives light and life to survivors all around her! Survivors need to see strength and perseverance despite opposition, and Lizzette models just that." - Melissa Schuman, actress and singer In … END_OF_DOCUMENT_TOKEN_TO_BE_REPLACED

Step inside the death chamber and behind the walls of Ohio’s death row. Bill Kimberlin, Psy.D, invites the reader on an extensive and unbiased journey inside Ohio’s death row in WATCH ME DIE: Last Words From Death Row. You will see how these … END_OF_DOCUMENT_TOKEN_TO_BE_REPLACED

"The wheels of justice turn slowly, but grind exceedingly fine." Renee Fehr knew that Gregory Houser killed her sister Sheryl. There was not a single doubt in her mind. Yet for 27 years Houser walked free. But Renee wouldn’t rest … END_OF_DOCUMENT_TOKEN_TO_BE_REPLACED

On the early morning of March 6, 1993, an intense fire broke out in a tiny nursery. Sixteen minutes later, firefighters had extinguished the blaze, only to reveal a room burned so severely, everything was virtually unrecognizable. Then, they were … END_OF_DOCUMENT_TOKEN_TO_BE_REPLACED

During the early morning hours of July 17, 1983, fatigue became a factor for the young couple from central Illinois who spent their day under the hot sun at Marriott’s Great America amusement park north of Chicago. On their drive home, the tired … END_OF_DOCUMENT_TOKEN_TO_BE_REPLACED

Some Cases You Solve. Some Cases You Survive. Naval Criminal Investigative Service Special Agent, Tyrone Benhoff is in purgatory. That’s what agents call it when they find themselves on the wrong side of command and are transferred to a place … END_OF_DOCUMENT_TOKEN_TO_BE_REPLACED

New from award-winning author Terry Persun! After the murder of his wife and unborn child, the only time freelance tech investigator Ten feels alive is when he cuts himself. For the last few years, he has taken freelance investigative jobs. Some of … END_OF_DOCUMENT_TOKEN_TO_BE_REPLACED

Coming January 29th to REELZChannel™! The DEADLY ASSOCIATES documentary! Step into Chicago during the 1960s and ‘70s, where mobsters influence everyone from strip-club owners to Teamsters, aldermen, judges, and local police. It is a world where … END_OF_DOCUMENT_TOKEN_TO_BE_REPLACED

"Lizzette Martinez’s story embodies the fire energy that gives light and life to survivors all around her! Survivors need to see strength and perseverance despite opposition, and Lizzette models just that." - Melissa Schuman, actress and singer In … END_OF_DOCUMENT_TOKEN_TO_BE_REPLACED

Soon To Be A Documentary Series! My name is Suzanne Buchanan. There is an active arrest warrant for me in Thailand for articles I published on "The Backpacker Murders" as the former owner and editor of the Samui Times. I am a British citizen and had … END_OF_DOCUMENT_TOKEN_TO_BE_REPLACED

In this true crime-flavored novel, Detective William Boyett is called out on Mardi Gras evening in Mobile, Alabama to investigate the discovery of a young woman’s body wrapped in a carpet in a vacant lot a few blocks from the parade route. Over … END_OF_DOCUMENT_TOKEN_TO_BE_REPLACED