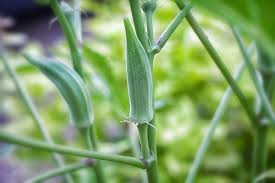 Years ago when we lived in the sticks we grew our own veggies, including okra. While it’s admittedly an acquired taste (the slime inside will eventually cook out), if you let the pods get no bigger than the first joint of your thumb they can add a tasty texture to soups and stews.

One summer around mid-July we had a bumper crop of them, and I mentioned to our two young sons that okra will get longer and more wood like as the season goes on, soon reaching the point they become inedible. At that both my boys got the idea of letting one little okra go, just to see how long it would get.

And did it change? Sure did. Summer waxed and waned, and we harvested everything in that garden…except for that mutant hell-pod. Each day it became more distended and grotesque, until I half-expected a terrified Kevin McCarthy to come up screaming and pounding on our car windows, “You’re next!!”

Came October, a couple days before a predicted killing frost, and by mutual agreement we cut the thing at last. By then it was two feet long, as thick as a bratwurst, and covered with spines and knots.

We dried it, and the kids used it as a sword.

Some Cases You Solve. Some Cases You Survive. Naval Criminal Investigative Service Special Agent, Tyrone Benhoff is in purgatory. That’s what agents call it when they find themselves on the wrong side of command and are transferred to a place … END_OF_DOCUMENT_TOKEN_TO_BE_REPLACED

New from award-winning author Terry Persun! After the murder of his wife and unborn child, the only time freelance tech investigator Ten feels alive is when he cuts himself. For the last few years, he has taken freelance investigative jobs. Some of … END_OF_DOCUMENT_TOKEN_TO_BE_REPLACED

Coming January 29th to REELZChannel™! The DEADLY ASSOCIATES documentary! Step into Chicago during the 1960s and ‘70s, where mobsters influence everyone from strip-club owners to Teamsters, aldermen, judges, and local police. It is a world where … END_OF_DOCUMENT_TOKEN_TO_BE_REPLACED

"Lizzette Martinez’s story embodies the fire energy that gives light and life to survivors all around her! Survivors need to see strength and perseverance despite opposition, and Lizzette models just that." - Melissa Schuman, actress and singer In … END_OF_DOCUMENT_TOKEN_TO_BE_REPLACED

Soon To Be A Documentary Series! My name is Suzanne Buchanan. There is an active arrest warrant for me in Thailand for articles I published on "The Backpacker Murders" as the former owner and editor of the Samui Times. I am a British citizen and had … END_OF_DOCUMENT_TOKEN_TO_BE_REPLACED

In this true crime-flavored novel, Detective William Boyett is called out on Mardi Gras evening in Mobile, Alabama to investigate the discovery of a young woman’s body wrapped in a carpet in a vacant lot a few blocks from the parade route. Over … END_OF_DOCUMENT_TOKEN_TO_BE_REPLACED