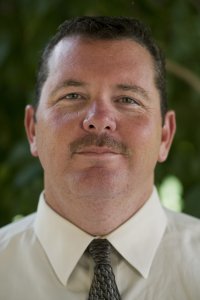 In 1993, I marred Cein Mass, who is an amazing wife and mother, and just 10 days after our wedding I started my law enforcement career when I enlisted into the U.S. Army Military Police Corps. I was station at Ft. Gordon, GA; Baumholder, Germany; and various bases throughout Bosnia in 1996. I had my first daughter, Rebekah, while stationed at Ft. Gordon. I got out of the Army 1998, and within a few months I was hired as a Police Officer with the Las Vegas Metropolitan Police Department. I had an incredibly fortunate career receiving my first detective assignment just four years after being hired and at the same time having my second daughter, Mckenzie.

I quickly rose through the detective hierarchy getting assigned to the Robbery Section. This was not the pinnacle for detective work but it was close to it. While working in the Robbery Section I worked on multiple high profile cases that grabbed national attention. My first case that grabbed national attention happened when Jody Thompson, a convicted armed robber pulled off an elaborate escape from the Nevada State Prison and returned to his life of crime in Las Vegas. Thompson seduced female prison employees, chummed up to staff members and positioned himself to be in a place to hide in a delivery truck as it exited the prison. The case was featured on America’s Most Wanted.

Within a year, I was assigned another high-profile case that received international attention. A local business owner from Thailand who was making some extra money in the evening as a cab driver. James Scholl got into the back seat of the cab on the Las Vegas Strip and poured a small bottle of gasoline on the head of the Thai cabbie then demanded his money. When the driver refused to cooperate, Scholl lit a match and threw it on the driver. The driver lived for three days before dying from his burn injuries. James Scholl’s trial and conviction was picked up by Court TV and was also aired in Thailand.

I was fortunate enough in my career to get the opportunity to get assigned to the Las Vegas Metropolitan Police Department’s Criminal Intelligence Section. Prior to its dismantling for political reasons, it was the covert unit which for decades in Las Vegas handled the cases in the shadowy corners of politics and organized crime. Every detective who was assigned to this unit was required to sign a confidentiality contract limiting what we could talk about outside the walls of our unit. The Criminal Intelligence Section was the pinnacle of the detective hierarchy and I am still proud to have had the opportunity to work in a place where only a handful of detectives received the nod of acceptance to serve. 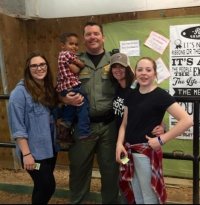 Andy Caldwell with his family at the Clark County Fair

As I progressed in my career I felt a growing pull towards dedicating my life to serving Christ. My local church became more of a priority for me. An opportunity surfaced to work as a Resident Officer in a community 60 miles outside of Las Vegas where I had lived for most of my career. I know it seems strange to people outside of the LVMPD but serving as a resident officer is a considerable step up in pay from being a detective, so it was an opportunity I could not pass up. 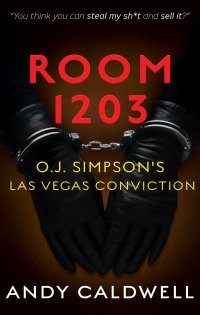 Most of the college I had attended up to this point was focused on Criminal Justice but I found myself having an unquenchable thirst to learn more about Christianity. While serving my community as a Resident Officer, I went back to school and changed my major to religion. After graduating Summa Cum Laude with a Bachelor of Science in Religion, I continued to my education until I obtained a Master of Arts in Theological Studies. In the middle of going to school and working, my wife and I decided we wanted to do foster care. We had a few kids pass through our home but one of them needed more than just temporary care, he needed a home and he was a perfect fit in our family. In 2016, my wife and I adopted our third child, Owen.

In 2015, I accepted the Senior Pastor position at Northpointe Community Church in North Las Vegas, where I served until I retired from the Las Vegas Metropolitan Police Department in 2017. After I retired, my family and I moved to Mill City, OR, where I currently serve as the Senior Pastor at Mill City Christian Church.

It's the holidays again! You're probably searching for and picking out the perfect present for everyone on your list. Consider this your reminder to treat yourself to something nice this holiday season, like free audiobooks with our Holiday Audiobook … END_OF_DOCUMENT_TOKEN_TO_BE_REPLACED

It's always a good day for free audiobooks! That's right! Free audiobooks! Just a gift from us to you, our readers.   Browse by genre and select the cover to get more information and your free copy! Non-Fiction True Crime Business … END_OF_DOCUMENT_TOKEN_TO_BE_REPLACED

We know how hard 2020 has been. To help you end the year on a better note, we wanted to give you the gift of free audiobooks! Hence, the Holiday 2020 Audiobook Giveaway! You're probably thinking of gifts for others right now, like we always do during … END_OF_DOCUMENT_TOKEN_TO_BE_REPLACED 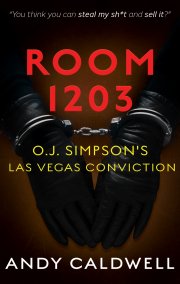 In 1995, NFL great and movie star, O.J. Simpson beat a murder rap for the death of his wife, Nicole Brown Simpson, and her friend, Ron Goldman. But in 2007 his luck with avoiding Lady Justice ran out in Las Vegas. ROOM 1203 is the true story of … END_OF_DOCUMENT_TOKEN_TO_BE_REPLACED

Soon To Be A Documentary Series! My name is Suzanne Buchanan. There is an active arrest warrant for me in Thailand for articles I published on "The Backpacker Murders" as the former owner and editor of the Samui Times. I am a British citizen … END_OF_DOCUMENT_TOKEN_TO_BE_REPLACED

Coming January 29th to REELZChannel™! The DEADLY ASSOCIATES documentary! Step into Chicago during the 1960s and ‘70s, where mobsters influence everyone from strip-club owners to Teamsters, aldermen, judges, and local police. It is a world where … END_OF_DOCUMENT_TOKEN_TO_BE_REPLACED

"Lizzette Martinez’s story embodies the fire energy that gives light and life to survivors all around her! Survivors need to see strength and perseverance despite opposition, and Lizzette models just that." - Melissa Schuman, actress and singer In … END_OF_DOCUMENT_TOKEN_TO_BE_REPLACED

Step inside the death chamber and behind the walls of Ohio’s death row. Bill Kimberlin, Psy.D, invites the reader on an extensive and unbiased journey inside Ohio’s death row in WATCH ME DIE: Last Words From Death Row. You will see how these … END_OF_DOCUMENT_TOKEN_TO_BE_REPLACED

"The wheels of justice turn slowly, but grind exceedingly fine." Renee Fehr knew that Gregory Houser killed her sister Sheryl. There was not a single doubt in her mind. Yet for 27 years Houser walked free. But Renee wouldn’t rest … END_OF_DOCUMENT_TOKEN_TO_BE_REPLACED

On the early morning of March 6, 1993, an intense fire broke out in a tiny nursery. Sixteen minutes later, firefighters had extinguished the blaze, only to reveal a room burned so severely, everything was virtually unrecognizable. Then, they were … END_OF_DOCUMENT_TOKEN_TO_BE_REPLACED

During the early morning hours of July 17, 1983, fatigue became a factor for the young couple from central Illinois who spent their day under the hot sun at Marriott’s Great America amusement park north of Chicago. On their drive home, the tired … END_OF_DOCUMENT_TOKEN_TO_BE_REPLACED

Some Cases You Solve. Some Cases You Survive. Naval Criminal Investigative Service Special Agent, Tyrone Benhoff is in purgatory. That’s what agents call it when they find themselves on the wrong side of command and are transferred to a place … END_OF_DOCUMENT_TOKEN_TO_BE_REPLACED

New from award-winning author Terry Persun! After the murder of his wife and unborn child, the only time freelance tech investigator Ten feels alive is when he cuts himself. For the last few years, he has taken freelance investigative jobs. Some of … END_OF_DOCUMENT_TOKEN_TO_BE_REPLACED

Coming January 29th to REELZChannel™! The DEADLY ASSOCIATES documentary! Step into Chicago during the 1960s and ‘70s, where mobsters influence everyone from strip-club owners to Teamsters, aldermen, judges, and local police. It is a world where … END_OF_DOCUMENT_TOKEN_TO_BE_REPLACED

"Lizzette Martinez’s story embodies the fire energy that gives light and life to survivors all around her! Survivors need to see strength and perseverance despite opposition, and Lizzette models just that." - Melissa Schuman, actress and singer In … END_OF_DOCUMENT_TOKEN_TO_BE_REPLACED

Soon To Be A Documentary Series! My name is Suzanne Buchanan. There is an active arrest warrant for me in Thailand for articles I published on "The Backpacker Murders" as the former owner and editor of the Samui Times. I am a British citizen … END_OF_DOCUMENT_TOKEN_TO_BE_REPLACED

In this true crime-flavored novel, Detective William Boyett is called out on Mardi Gras evening in Mobile, Alabama to investigate the discovery of a young woman’s body wrapped in a carpet in a vacant lot a few blocks from the parade route. Over … END_OF_DOCUMENT_TOKEN_TO_BE_REPLACED