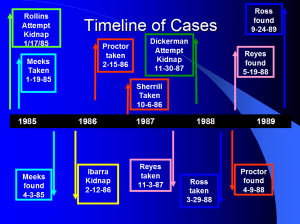 Editor’s Note: Katlyn Sweet is the daughter of Detective Gary Sweet, one of the main investigators whose quest to catch serial child-killer David Penton is the subject of BOGEYMAN: He Was Every Parent’s Nightmare. She wrote this blog about her father’s investigation and its impression on her then and now.

A small child is abducted, scared, murdered and tossed onto the earth like she means nothing to this world. In fact, the small child is referred to as “a throwaway kid” simply because she lives in not-so-nice neighborhood. What was this man after? Why innocent young girls that had not even had time to experience the best parts of life?

I was an elementary school girl during the years that my dad worked on this case. Though I was pretty young, I can recall vague images of my dad having papers scattered all over our living room floor, where I usually liked to play with my Barbies. I was never exposed to any images or items from the case, nor did my dad tell me any details, fearing that he might scare me. But seeing the sadness on my father’s face was enough to stick with me 15 years later. My dad hardly ever let any of his work affect him at home, which is how I knew something really bad must have happened.

Here I am, years later, learning every small explicit detail of what he went through as I read through this book. I have had many late night conversations with my dad trying to learn, as best as I could, what all took place during the search for the bogeyman. Knowing that I am now old enough to hear and see some of the horrible things that happened to these small girls, my dad openly reveals all of the information to me, but only when I ask for it.

My heart absolutely shatters for them, as well as everyone involved. I can’t help but grow an overwhelming amount of respect for what it must have been like to dedicate part of your life to catching this evil killer. Only a monster could commit something so nasty and mind-boggling.

Although the parents had lost hope in finding the man who stole their baby girls, detective Gary Sweet- my dad, was not going to give up. The cases had not been touched in years, but when Sweet got his hands on them, there was no way he was going to let it go unsolved. I think having three daughters of his own made him deeply grieve and almost feel what it may have been like for the girls’ families.

Two Great True Crime Books For The Price Of One! Filling Out The Form Also Enters You To Win One Of Four Signed Print Copies Of SMOOTH … END_OF_DOCUMENT_TOKEN_TO_BE_REPLACED

Date: August 7, 2014 Garland police detective Gary Sweet discusses on Dallas WFAA television how he got involved in the case that was the basis for … END_OF_DOCUMENT_TOKEN_TO_BE_REPLACED

It was a stimulating and inspirational day at our most recent salon in Cardiff-by- the-sea (or so I’m told). I was thrilled that a couple of repeat attendees said they … END_OF_DOCUMENT_TOKEN_TO_BE_REPLACED

Due to Sullivan’s extensive writing about Ted Bundy (which has produced six books), he’s become a sort of magnet over the years, drawing out many people who were part of the Bundy story, but have otherwise kept a low profile over the decades; and … END_OF_DOCUMENT_TOKEN_TO_BE_REPLACED

Volume One The Early Years In 1944 Brooklyn, newborn Michael J. Hardy is rejected by his mother so she can run with gangster Bugsy Siegel, Hardy’s godfather. Shirley Rook rose to the top of the criminal ranks. As the Queen of New York City … END_OF_DOCUMENT_TOKEN_TO_BE_REPLACED

This is the true story of Carmine Imbriale – a gambler, a brawler, a bandit, a bookie, an enforcer. For two decades, Imbriale was a street-level operative in one of the most violent crews in the Colombo Family, and he endeared himself to some of the … END_OF_DOCUMENT_TOKEN_TO_BE_REPLACED

Ten must track down and stop rogue scientists behind the development of criminal technology in THE HUMANZEEE EXPERIMENTS, the next installment of The 'Ten' Mystery Series! The International Security for Technological Innovations, a federal … END_OF_DOCUMENT_TOKEN_TO_BE_REPLACED

It was a dreary winter afternoon in Ayer, Massachusetts, a quintessential New England town, the type which is romanticized in Robert Frost's poems. But on January 30, 1979, a woman’s scream was heard piercing the northeast tempest wind. In an … END_OF_DOCUMENT_TOKEN_TO_BE_REPLACED