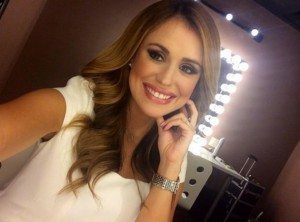 I’m a 31-year old Latina and a Journalist. We’ve all heard about it on the news, from a friend, or someone we know, who unfortunately have been victims of what’s called ‘domestic violence’. Just like many other things in life we think, “well, that won’t happen to me,” and that’s exactly what I always thought until I met Debbie Flores-Narvaez.

In reality, I didn’t get to meet Debbie in person; I met her after she was brutally murdered. Yes, I’m a crime reporter. It was December 2010 and someone sent me a message on Facebook asking me for help about a missing Las Vegas Dancer; her name was Debbie. She was a beautiful Puerto Rican attorney who at age 30, decided to leave her job in Baltimore to pursue a career as a dancer in Sin City. As odd as it may sound, and against her family’s wishes, she did it.

Not only did she find fame and a boyfriend, she found death in the hands of the love of her life. She was beautiful, smart and well educated. He was talented, charming and a ladies’ man. Debbie couldn’t comprehend how that man whom she loved so much could have eyes for other women. He abused her verbally, physically, emotionally, and ended her life. To cover his crime, Jason – her boyfriend- dismembered the beautiful dancer’s body with a handsaw and hid her in plastic containers filled with cement.

Her friends had warned her, and she knew that man was never going to change. Nevertheless, she continued to 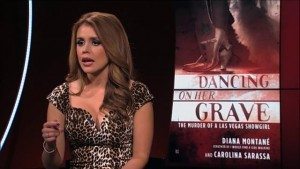 pursue that toxic relationship. She could have said NO, but love had her blindfolded. The truth is very cruel: Debbie is dead and her boyfriend in prison for the rest of his life.

Could anything have been different if Debbie or even Jason had said NO? Could these types of tragedies be prevented? What can we do as a community to put a stop to domestic violence? As I said, I never had the pleasure to meet Debbie in person, but I know she would have wanted to warn other women about what happened to her.

Almost five years have gone by, and Debbie’s story was fading from people’s memories. I’m humbled to be able to tell her story with a true-crime book titled “Dancing on Her Grave: The Murder of a Las Vegas Showgirl.” My co-author Diana Montane and I want to make sure Debbie doesn’t become just another statistic of domestic violence.

Every nine seconds a woman is beaten in the United States. As women, we have the power to walk away, to call the police and to say to ourselves NO MORE. It’s in our hands to stop this.

Soon To Be A Documentary Series! My name is Suzanne Buchanan. There is an active arrest warrant for me in Thailand for articles I published on "The Backpacker Murders" as the former owner and editor of the Samui Times. I am a British citizen … END_OF_DOCUMENT_TOKEN_TO_BE_REPLACED

Coming January 29th to REELZChannel™! The DEADLY ASSOCIATES documentary! Step into Chicago during the 1960s and ‘70s, where mobsters influence everyone from strip-club owners to Teamsters, aldermen, judges, and local police. It is a world where … END_OF_DOCUMENT_TOKEN_TO_BE_REPLACED

"Lizzette Martinez’s story embodies the fire energy that gives light and life to survivors all around her! Survivors need to see strength and perseverance despite opposition, and Lizzette models just that." - Melissa Schuman, actress and singer In … END_OF_DOCUMENT_TOKEN_TO_BE_REPLACED

Step inside the death chamber and behind the walls of Ohio’s death row. Bill Kimberlin, Psy.D, invites the reader on an extensive and unbiased journey inside Ohio’s death row in WATCH ME DIE: Last Words From Death Row. You will see how these … END_OF_DOCUMENT_TOKEN_TO_BE_REPLACED

"The wheels of justice turn slowly, but grind exceedingly fine." Renee Fehr knew that Gregory Houser killed her sister Sheryl. There was not a single doubt in her mind. Yet for 27 years Houser walked free. But Renee wouldn’t rest … END_OF_DOCUMENT_TOKEN_TO_BE_REPLACED

On the early morning of March 6, 1993, an intense fire broke out in a tiny nursery. Sixteen minutes later, firefighters had extinguished the blaze, only to reveal a room burned so severely, everything was virtually unrecognizable. Then, they were … END_OF_DOCUMENT_TOKEN_TO_BE_REPLACED

During the early morning hours of July 17, 1983, fatigue became a factor for the young couple from central Illinois who spent their day under the hot sun at Marriott’s Great America amusement park north of Chicago. On their drive home, the tired … END_OF_DOCUMENT_TOKEN_TO_BE_REPLACED

From the author of FIRST DEGREE RAGE: The True Story of ‘The Assassin,’ An Obsession, and Murder comes the ongoing and chilling true crime saga of L. C. Underwood, the obsessively jealous police officer from North Carolina. Underwood … END_OF_DOCUMENT_TOKEN_TO_BE_REPLACED

In the late hours of July 22, 1991, Detective Patrick "Pat" Kennedy of the Milwaukee Police Department was asked to respond to a possible homicide. Little did he know that he would soon be delving into the dark mind of one of America's most notorious … END_OF_DOCUMENT_TOKEN_TO_BE_REPLACED

Grace Metalious, born and raised in Manchester, New Hampshire, came from humble beginnings. A former mill worker, mother of three, and school principal's wife, she would shock the nation in 1956 with the publication of Peyton Place, her first … END_OF_DOCUMENT_TOKEN_TO_BE_REPLACED

Investigators and Central Florida residents were horrified when 16-year-old vampire cult leader Rod Ferrell was arrested and charged with bludgeoning a cult member's parents. When they realized the slain couple's 15-year-old daughter was missing, … END_OF_DOCUMENT_TOKEN_TO_BE_REPLACED

Born in 1960, Jesus Ruiz Henao grew up poor, but wanted to be rich like the drug dealers he saw growing up in the cocaine-producing region of Colombia’s Valle of the Cauca. To realize his ambition, Ruiz Henao moved to London, United Kingdom, in … END_OF_DOCUMENT_TOKEN_TO_BE_REPLACED

As the adopted son of two cult leaders, Benjamin Risha was raised to someday assume a place of leadership in the Tony and Susan Alamo Christian Foundation with the Bible, and his parents’ interpretation of it, as his guide. He believed the prophecies … END_OF_DOCUMENT_TOKEN_TO_BE_REPLACED

Includes Never Revealed Correspondence Between Denaro and Berkowitz! In 1976, a killer who called himself 'The Son of Sam' shot and killed a half dozen people and wounded as many more in New York City. During his crime spree, the madman left bizarre … END_OF_DOCUMENT_TOKEN_TO_BE_REPLACED

It was the midcentury murder that fascinated a nation and kept it glued for two years to radio, television and newspapers through three trials. Did the handsome, wealthy doctor and his beautiful young paramour plan to kill his glamorous socialite … END_OF_DOCUMENT_TOKEN_TO_BE_REPLACED

WHY DO SERIAL KILLERS KILL? OUT OF THE MOUTHS OF SERIAL KILLERS​ is as close as you will ever come to discovering the answer ... and in the killer’s own words! In this one-of-a-kind book, author Mary Brett corresponded with some of America’s … END_OF_DOCUMENT_TOKEN_TO_BE_REPLACED

What do Wyatt Earp, Belle Gunness, Big Foot the Renegade, Billy the Kid, and Dr. H.H. Holmes, and The Black Hand have in common? They were all subjects of true crime newspaper reporting in the 1800s, and now these stories and that of many others … END_OF_DOCUMENT_TOKEN_TO_BE_REPLACED

Some Cases You Solve. Some Cases You Survive. Naval Criminal Investigative Service Special Agent, Tyrone Benhoff is in purgatory. That’s what agents call it when they find themselves on the wrong side of command and are transferred to a place … END_OF_DOCUMENT_TOKEN_TO_BE_REPLACED

New from award-winning author Terry Persun! After the murder of his wife and unborn child, the only time freelance tech investigator Ten feels alive is when he cuts himself. For the last few years, he has taken freelance investigative jobs. Some of … END_OF_DOCUMENT_TOKEN_TO_BE_REPLACED

Coming January 29th to REELZChannel™! The DEADLY ASSOCIATES documentary! Step into Chicago during the 1960s and ‘70s, where mobsters influence everyone from strip-club owners to Teamsters, aldermen, judges, and local police. It is a world where … END_OF_DOCUMENT_TOKEN_TO_BE_REPLACED

"Lizzette Martinez’s story embodies the fire energy that gives light and life to survivors all around her! Survivors need to see strength and perseverance despite opposition, and Lizzette models just that." - Melissa Schuman, actress and singer In … END_OF_DOCUMENT_TOKEN_TO_BE_REPLACED

Soon To Be A Documentary Series! My name is Suzanne Buchanan. There is an active arrest warrant for me in Thailand for articles I published on "The Backpacker Murders" as the former owner and editor of the Samui Times. I am a British citizen … END_OF_DOCUMENT_TOKEN_TO_BE_REPLACED

In this true crime-flavored novel, Detective William Boyett is called out on Mardi Gras evening in Mobile, Alabama to investigate the discovery of a young woman’s body wrapped in a carpet in a vacant lot a few blocks from the parade route. Over … END_OF_DOCUMENT_TOKEN_TO_BE_REPLACED