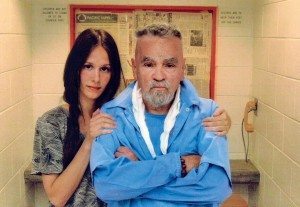 Even mass murderer Charles Manson couldn’t wrap his fevered brain around this macabre plot: His erstwhile fiancée had a bizarre scheme to put his corpse in a glass casket and get rich by charging admission.

Manson’s beloved, 27-year-old Afton Elaine Burton, wanted to marry the homicidal cult leader just so she’d own his remains when he died. A lot of people, she reckoned, would pay good money to see Manson’s preserved body in a modern-day, post-mortem peep show.

Manson, now 43 years into a life sentence in a California prison, bailed out of the engagement when he realized he’d been “played for a fool.” Plus, the 80-year-old killer—the chief bogeyman for three generations of Americans—believes he’s immortal, so it’s a moot point.

But who the hell would pay to see Manson’s corpse anyway? radio talk-show host Jack Riccardi asked this week.

Well, if history is any indicator, plenty of people would line up for a few seconds with Charlie’s carcass. And they’d happily pay for the E-ticket encounter.

We have a perverse fascination with bad men’s bones. It’s one part morbid curiosity, two parts schadenfreude, and a dash of celebrity worship. Somehow, our taboos about death don’t apply when it’s a criminal’s cadaver. The only thing more important to us than seeing justice done is seeing the proof (and maybe snapping a selfie with it).

In the Old West, outlaws’ corpses were commonly displayed publicly for days, mostly as a warning to anybody who might be considering a life of crime. 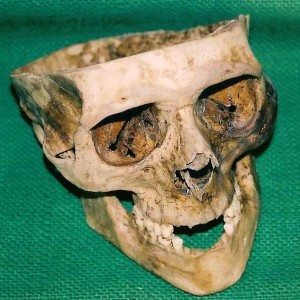 The uncapped skull of Wyoming outlaw Big Nose George Parrott. His skin became a pair of shoes and his skullcap a candy dish. (Ron Franscell photo)

Today, the most popular display at the local museum in Rawlins, Wyoming, is the skull of a murderous bandit named Big Nose George Parrott—and the pair of shoes a local doctor made from George’s skin after he was lynched from a downtown telegraph pole in 1878. Those shoes were a gift to the law-and-order governor of Wyoming, who reportedly wore them to his inauguration.

And in 1901, the menfolk of Clayton, New Mexico, posed proudly for a photographer with the corpse of famous outlaw Black Jack Ketchum, who literally lost his head when he was hanged. In those old photos, the men smile broadly as Black Jack’s head lies in the dirt at their feet.

More than 20,000 gawkers mobbed the Dallas mortuary where Bonnie and Clyde’s bullet-riddled bodies were displayed in 1934. They were cold-blooded killers (and bumbling robbers) but their romance fascinated otherwise law-abiding Depression-era Americans.

One of the strangest true stories of outlaw corpses begins in 1870, five years after the Lincoln assassination, when a young man named John St. Helen, fearing he was about to die, confided to his Texas lawyer that he was, in fact, the infamous assassin John Wilkes Booth.

To be sure, he bore a resemblance to the famed actor and dastardly killer. His age (about 40) was about right, and his theatrical demeanor gave one pause. And he told a remarkable story of mistaken identity on the Virginia farm where Booth was supposedly killed by federal troops. 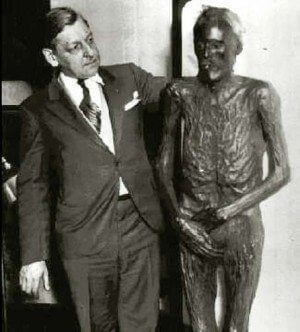 A mummy purported to be John Wilkes Booth traveled the American sideshow circuit for decades, well into the 1970s, before disappearing.

That was the last anyone heard of St. Helen — until 1903, when an itinerant housepainter named David George committed suicide in Enid, Oklahoma. He’d again confessed his “true” identity to a local widow, who described him as an intelligent man who often quoted Shakespeare when in his cups. And the coroner discovered George’s right leg had been broken just above the ankle years before, and he was born in the same year as Booth. They wondered, might David George’s alias be a combination of two Lincoln conspirators’ names, David Herold and George Atzerodt, both hanged for their roles in the assassination plot?

George/St. Helen/Booth’s corpse was mummified and displayed for two years in the front window of an Enid funeral home until his old lawyer came to identify George as his old friend, John St. Helen. He claimed the body, had it positively identified by Booth relatives, then sent it on a carnival sideshow tour as the mummy of John Wilkes Booth.

In 1937, the mummy reportedly attracted more than $100,000 from sideshow rubberneckers. Various carnivals displayed the mummy over the years until it vanished completely in the mid-1970s … about the time the feds were cracking down on displaying human remains.

Today, it’s one of the enduring mysteries of American crime: Where is the Booth Mummy?

Why do we care what became of Booth’s earthly remains? Why do people pay admission to see Big Nose George’s skull and loafers? Why are morgue shots of serial killer Ted Bundy a staple in true-crime chatrooms? And why did we want to see Osama’s corpse in all its grisly colors?

Or maybe it’s just so we can snap a selfie with Charles Manson’s corpse and post it on Instagram, like a surreptitious snapshot of Jimmy Fallon in the men’s room at Applebee’s. Now that’s worth something.

In addition to his bestselling true-crime books, Ron Franscell is the author of “The Crime Buff’s Guides,” a fascinating state-by-state crime history series.

Sylvester Stallone owns the movie rights to Hunter by James Byron Huggins, and is shown here reading it . … END_OF_DOCUMENT_TOKEN_TO_BE_REPLACED

It's always a good day for free audiobooks! That's right! Free audiobooks! Just a gift from us to you, our readers.   Browse by genre and select the cover to get more information and your free copy! Non-Fiction True Crime Business … END_OF_DOCUMENT_TOKEN_TO_BE_REPLACED

It was a dreary winter afternoon in Ayer, Massachusetts, a quintessential New England town, the type which is romanticized in Robert Frost's poems. … END_OF_DOCUMENT_TOKEN_TO_BE_REPLACED

Teens savagely murder a couple in the name of their vampire cult. A sex-starved teacher cannot get enough of her young male student. The case of a missing child keeps cops awake at night for years after his confounding … END_OF_DOCUMENT_TOKEN_TO_BE_REPLACED

Koh Tao--a small island in the Gulf of Thailand, surrounded by pristine beaches, swathed in sunshine, and a mecca for tourists, divers and backpackers. But "Turtle Island" has its dark side. In 2014, Koh Tao was the site of the brutal double murders … END_OF_DOCUMENT_TOKEN_TO_BE_REPLACED

Terrifying things are happening to Kay Weden, a forty-something single mom and high school teacher in Salisbury, North Carolina. Despite having no known enemies, Kay’s home, car, and peace of mind are under attack throughout 1993. Most chilling … END_OF_DOCUMENT_TOKEN_TO_BE_REPLACED

In “The Garden State Parkway Murders,” true crime writer and attorney Christian Barth dives into the harrowing story of the unsolved murders of Elizabeth Perry and Susan Davis. College friends, the two women were brutally knifed to death and their … END_OF_DOCUMENT_TOKEN_TO_BE_REPLACED

Losing a young daughter to murder is the worst nightmare that a mother could possibly imagine, but what if the killer was her son? Charity Lee was thrust into this unimaginable situation when her 13-year-old son Paris murdered her beloved 4-year-old … END_OF_DOCUMENT_TOKEN_TO_BE_REPLACED

On a cold Southern night in 2013 under a full moon, 20-year-old Heather Elvis parked her car at a boat ramp along the Intracoastal Waterway and was never seen again.  The disappearance of the beautiful, vivacious hostess at a … END_OF_DOCUMENT_TOKEN_TO_BE_REPLACED

“Ferak chronicles the long and sordid history of the Manitowoc County Sheriff’s department and the reason Sweaty’s license was suspended. Framing Avery was just par for the course." -- Kathleen Zellner In 2016-17, while working for the USA TODAY … END_OF_DOCUMENT_TOKEN_TO_BE_REPLACED

Joe Mac was a legendary homicide detective until his vision was lost in the line of duty and he was forced into retirement. Now he lives a life of darkness, his only friend being a huge Raven that Joe Mac names “Poe.” But when Joe Mac’s grandson … END_OF_DOCUMENT_TOKEN_TO_BE_REPLACED

Winner of the 2020 INDEPENDENT PRESS AWARD and 2018 LITERARY EXCELLENCE PENCRAFT AWARD A practicing attorney, author Anne K. Howard first contacted Howell while he was serving a fifteen-year sentence for the murder of one of his seven victims. He … END_OF_DOCUMENT_TOKEN_TO_BE_REPLACED

Winner of 7 Literary Awards! "THE CRATE is an important and impressive piece of work. I'm glad it was written, and I'm glad I read it." -- Lee Child, #1 New York Times bestselling author of the Jack Reacher Series After surviving the horrors of the … END_OF_DOCUMENT_TOKEN_TO_BE_REPLACED

Due to Sullivan’s extensive writing about Ted Bundy (which has produced six books), he’s become a sort of magnet over the years, drawing out many people who were part of the Bundy story, but have otherwise kept a low profile over the decades; and … END_OF_DOCUMENT_TOKEN_TO_BE_REPLACED

Volume One The Early Years In 1944 Brooklyn, newborn Michael J. Hardy is rejected by his mother so she can run with gangster Bugsy Siegel, Hardy’s godfather. Shirley Rook rose to the top of the criminal ranks. As the Queen of New York City … END_OF_DOCUMENT_TOKEN_TO_BE_REPLACED

This is the true story of Carmine Imbriale – a gambler, a brawler, a bandit, a bookie, an enforcer. For two decades, Imbriale was a street-level operative in one of the most violent crews in the Colombo Family, and he endeared himself to some of the … END_OF_DOCUMENT_TOKEN_TO_BE_REPLACED

Ten must track down and stop rogue scientists behind the development of criminal technology in THE HUMANZEEE EXPERIMENTS, the next installment of The 'Ten' Mystery Series! The International Security for Technological Innovations, a federal … END_OF_DOCUMENT_TOKEN_TO_BE_REPLACED

It was a dreary winter afternoon in Ayer, Massachusetts, a quintessential New England town, the type which is romanticized in Robert Frost's poems. But on January 30, 1979, a woman’s scream was heard piercing the northeast tempest wind. In an … END_OF_DOCUMENT_TOKEN_TO_BE_REPLACED