In response to an article recently published by The New York Times titled “Why Do Women Love True Crime?”, we asked some of our many talented female authors the same question.

For many years, female readers told me that their interest in all things true crime had to be hidden. It was a vice that couldn’t and shouldn’t be admitted, because their husbands, friends and society in general saw it as as weird, dark or fringe. In literary circles, too, it was a genre that was looked down upon by critics and those who saw themselves as “real” authors.

But the reality was that there were always readers out there, and this interest existed, it’s just that it’s more acceptable today to admit it, perhaps because the world has grown so much more chaotic and violent around us.

Whatever the reason, the true crime audience has come out in force. Women no longer have to hide their urges to read books, listen to podcasts or watch TV shows about the many ways people find to harm and kill each other. Women–and men too–can come out and freely admit that they are curious about why killers do the horrible things they do to their victims, how they come up with their bizarre schemes, and how the detectives track them down and prove their guilt.

I’m not really sure what caused this change, but it is nice that we no longer have to hide or feel embarrassed about this deep curiosity, the urge to understand the mysteries of the human condition and how and why people can go so terribly wrong. For some women true crime may be an escape, or a way to learn how to prepare or protect themselves, but what I’ve found is that many of my female readers have lived through traumas of their own, and these stories help them cope. Something about these stories resonate with them and helps satisfy their urge to understand the world around them. Most killers are men, so female killers become all the more mysterious. Maybe we are just trying to understand the opposite sex better?

For me personally, I like to go deep into the psychology of why people act they way they do and what motivates them to kill and harm others. Was it some trauma in their past or were they born with a mental illness or a deep flaw as a sociopath?

As I go over law enforcement’s investigation into a case, I always go further and deeper into the human areas or possible motives that they might have missed or ignored, because they weren’t important to win a conviction in court. For me, putting a book together is just like solving a puzzle, like putting an actual jigsaw puzzle together, piece by piece until the picture becomes clear. I love the research and I love to weave all the details into a compelling story, pulling readers along with suspense, and hopefully leaving them satisfied that they now understand what truly happened — to the best of my ability. Because some things we will never truly understand.

When promoting “His Garden: Conversations with a Serial Killer,” I noticed that the vast majority of attendees at book signings and presentations were female. What surprised me the most was the wide age range. There were forty and fifty-something mothers with their equally curious adolescent daughters sitting alongside elderly true crime junkies- all eager to ask questions about why serial killers do what they do. The women shared two common traits: an awareness that regardless of social status or age, we are all vulnerable to being randomly victimized by violent and sadistic criminals; and an overriding compassion for the victims and their grieving families. When we view a crime scene, we are not just looking at the blood. We are imagining that the victim could have been our daughter, our mother, our friend, ourselves…

I’m not sure that men truly understand how differently women view the world around them. Even a meditative stroll alone in a dense and isolated forest poses a threat. How many men turn around to see what made the scuffling noise behind them? Women do it all of the time. We try not to fixate on such horrors, but we can’t ignore the fact that they exist- and we want to know what happens to those who fall prey. On one level, our fascination is detached and voyeuristic (“Oh that poor girl! Surely, that will never happen to me!”). However, I believe that our shared intrigue runs deeper than that… from an intellectual point of view, we want to know what motivates violent criminals to behave as they do. Perhaps by figuring out this question, we can feel some sense of control.

I’ll tell you why I’m one of those women who love true-crime stories — or at least a certain kind of true-crime story, the kind I write about in “Mothers & Murderers.” Ever since I was a whipper-snapper, reporting on criminal courts for the San Jose Mercury News in my first job in journalism, I was amazed and delighted by how arrest records and trial transcripts lay bare the family secrets we all work so hard to hide, sometimes even from ourselves. Once you’re a suspect, police are entitled to find out — and record — almost everything about you, from the scandalous objects in your lingerie drawer to what you wrote in your diary after your last fight with your husband. I’d come from a family that had a rock-solid taboo against airing dirty laundry (even though we had more than our share of it) and I suspect my many months of reading all these secrets revealed contributed to my finally facing and understanding all the secrets we had kept.

I think that as women, we know we are vulnerable. Women are pretty and desirable and too often seen as prey. True crime stories teach us survival skills.

Where else would we learn about stalking techniques and ruses like one man grabbing your purse while another comes upon you from behind? Where else can we discover escape tactics and get versed in the use of a corkscrew as a self-defense weapon?

We pray it never happens while mentally rehearsing for a worst case scenario. That’s why we read true crime.

I was drawn to crime writing because I wanted to know how the lives of the victims, defendants, law enforcement officers and attorneys came together to build or solve a case. Most of us, thankfully, will never reach the point that we commit a serious crime, so I was curious what led to that point for those who are, or those who are at least accused. I never thought about it in terms of female vs. male interest in crime reporting. But it does seem to hold true that more women than men are attracted to true crime writing. Perhaps it is that empathy that women have toward putting ourselves in someone else’s place, whether it’s for self-preservation or merely a better understanding of our fellow humans.

As the adopted son of two cult leaders, Benjamin Risha was raised to someday assume a place of leadership in the Tony and Susan Alamo Christian … END_OF_DOCUMENT_TOKEN_TO_BE_REPLACED

HE WAS THEIR DEADLIEST KILLER The late Roth Tiberius Cain, legendary CIA hit man, is gone, but not forgotten. A top-secret project code-named Genocide One has given him a chance to live again, and enough firepower to kill multitudes – and survive … END_OF_DOCUMENT_TOKEN_TO_BE_REPLACED

“Ferak chronicles the long and sordid history of the Manitowoc County Sheriff’s department and the reason Sweaty’s license was suspended. Framing Avery was just par for the course." -- Kathleen Zellner In 2016-17, while working for the USA TODAY … END_OF_DOCUMENT_TOKEN_TO_BE_REPLACED

In 1976, a serial rapist terrorized Sacramento County in California. The masked predator made his way into the homes of his unsuspecting victims, leaving a trail of devastation and destruction behind him. He moved on to other areas in Northern … END_OF_DOCUMENT_TOKEN_TO_BE_REPLACED

Joe Mac was a legendary homicide detective until his vision was lost in the line of duty and he was forced into retirement. Now he lives a life of darkness, his only friend being a huge Raven that Joe Mac names “Poe.” But when Joe Mac’s grandson … END_OF_DOCUMENT_TOKEN_TO_BE_REPLACED

Winner of 7 Literary Awards!  “THE CRATE is an important and impressive piece of work. I’m glad it was written, and I’m glad I read it.” -- Lee Child, #1 New York Times bestselling author of the Jack Reacher Series After surviving the horrors of … END_OF_DOCUMENT_TOKEN_TO_BE_REPLACED

On a fall evening in Corvallis, Oregon in 1967, seventeen year old Dick Kitchel, a senior at the high school, disappeared after attending a party at the home of a couple in their twenties who often hosted gatherings and provided beer to a younger … END_OF_DOCUMENT_TOKEN_TO_BE_REPLACED

Before abuse hot lines and safe houses were widespread, June Briand shot four bullets into her husband’s head and was sentenced to fifteen years to life. This is the shocking true story of survival—and the intense bond June shared with her … END_OF_DOCUMENT_TOKEN_TO_BE_REPLACED 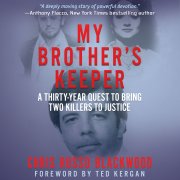 A 2018 International Book Award Finalist! If your big brother was killed by murderers who thoughtlessly tossed his remains, would you spend a fortune and 30 years to stalk those responsible and bring them to justice? Yeah, you might want to, … END_OF_DOCUMENT_TOKEN_TO_BE_REPLACED

A Killer Is Set Loose To Kill Again When The Prosecution Fails To Stop Him On a clear, brisk night in September of 2000, 33-year-old Della Brown was found sexually assaulted and beaten to death inside a filthy, abandoned shed in seedy part of … END_OF_DOCUMENT_TOKEN_TO_BE_REPLACED

The Captivating "True Story Of The World's Premier Forensic Investigators" at NecroSearch International Updated and Revised! Now Available for the First Time As Kindle eBook, Audible and iTunes Editions! "A fascinating journey into the trenches of … END_OF_DOCUMENT_TOKEN_TO_BE_REPLACED

INCLUDES OVER 40 COLOR PHOTOGRAPHS! Frank Cullotta was best known for his exploits as an associate of the Chicago Outfit and his role as Tony Spilotro’s enforcer and street lieutenant in Las Vegas. However, he had another interest besides crime. … END_OF_DOCUMENT_TOKEN_TO_BE_REPLACED

What do Wyatt Earp, Belle Gunness, Big Foot the Renegade, Billy the Kid, and Dr. H.H. Holmes, and The Black Hand have in common? They were all subjects of true crime newspaper reporting in the 1800s, and now these stories and that of many others … END_OF_DOCUMENT_TOKEN_TO_BE_REPLACED

Will A Serial Killer Soon Walk The Streets Again? Don Miller was quiet and reserved.  As a former youth pastor, he seemed a devout Christian.  No one would have ever suspected that the recent graduate of the Michigan State University … END_OF_DOCUMENT_TOKEN_TO_BE_REPLACED

As the adopted son of two cult leaders, Benjamin Risha was raised to someday assume a place of leadership in the Tony and Susan Alamo Christian Foundation with the Bible, and his parents’ interpretation of it, as his guide. He believed the prophecies … END_OF_DOCUMENT_TOKEN_TO_BE_REPLACED