I have to laugh when someone looks at my list of books written over the past few decades and jumps to the conclusion that I am incredibly disciplined.

Okay, as a pilot, I AM disciplined to a reasonable degree, but life around our household does not include watching me goosestep to my office each morning at precisely 5 am with coffee in hand only to emerge 8.5 hours later having produced exactly 10.2 pages. I wish I was capable of such Terminator-like concentration, but I’m just as likely to address the computer with literary intent at 8, or even 10, or sometimes in the afternoon or next Thursday.

Sometimes, to be frank, it’s like the story of the famous New York Times columnist back in the 30’s who ran totally dry of ideas one morning. He’d been taught that if it ever happened, he should at least write the word “The” on his typewriter. So he types “The,” puts on his coat, spends the day drinking in a nearby tavern, and at 5 returns to the newsroom to type “…Hell with it!” before going home.

I’m told it’s a true story, but I wasn’t there!

For me, the one concession to force-marched efficiency is that when in writing phase, I try diligently to produce 10 good pages per day, and I do lay out a projected writing schedule over two to three months, and I do log my production (in terms of good pages) each evening. Other than that, I’m, well, infected by the writer’s curse like every other author.

So, what’s the writer’s curse? It’s the dream of every spouse because, before you start a major writing project (and many times during the writing), every tiny domestic chore and administrative duty you can possibly find takes on larger-than- life importance and demands to be completed before you’re licensed to write a word. Lawns get mowed, gutters get cleaned, pictures get straightened on the wall, long-forgotten back-burner tasks in the office become critical, and pretty much anything that can be used as an excuse NOT to write is tackled…inclusive of taking the cat for a walk. No kidding! 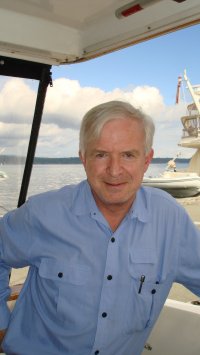 Think of the last time you saw the family dog whirl around about a dozen times before finally laying down. That’s your average author, moi included.

Oh, sure, eventually all the tasks are completed and, like the sheriff played by Cleavon Little in that classic movie Blazing Saddles, you find yourself holding a gun ON yourself to force yourself to march to the laptop. (Of course, Cleavon’s reason for holding a gun on himself was markedly different, but the effect is the same).

In the final analysis, though, writing a feature-length thriller of, say, 120-thousand words, has its own innate discipline and momentum, simply because, even though I’m the author, I dying to know what happens, too!

On takeoff from Denver during a winter blizzard, an airliner piloted by veteran Captain Marty Mitchell overruns a commuter plane from behind. Bizarrely, the fuselage of the smaller aircraft is tenuously wedged onto the huge right wing of his Boeing … END_OF_DOCUMENT_TOKEN_TO_BE_REPLACED

ME FLY? IS THERE AN APP FOR THAT? Most of us who remain in love with flying in any reasonable form have to be feeling a bit helpless these days regarding the march of articles and reports (including a few studies) documenting declining enrollment … END_OF_DOCUMENT_TOKEN_TO_BE_REPLACED

For all my career as an airline pilot (Braniff International, 1975-May 12, 1982, 4:34 PM; and Alaska Airlines, 1985 2005) I’ve heard the breathless rumor that a pilot shortage was just around the corner–and it never was. Until now. Today, for … END_OF_DOCUMENT_TOKEN_TO_BE_REPLACED

Every now and then it seems like all you hear about are private aircraft accidents. To a certain extent, that’s due to a herd mentality among media–one crash begets heightened attention and quick reporting of the next one if close in time. But it’s … END_OF_DOCUMENT_TOKEN_TO_BE_REPLACED

Ah, harmony! When you’re sitting in the cabin of a jetliner zipping through hostile atmosphere at 39-thousand feet, legally and effectively at the mercy of your flight crew, the last thing you want back in 42B is a reason to worry about your crew … END_OF_DOCUMENT_TOKEN_TO_BE_REPLACED

Some Cases You Solve. Some Cases You Survive. Naval Criminal Investigative Service Special Agent, Tyrone Benhoff is in purgatory. That’s what agents call it when they find themselves on the wrong side of command and are transferred to a place … END_OF_DOCUMENT_TOKEN_TO_BE_REPLACED

New from award-winning author Terry Persun! After the murder of his wife and unborn child, the only time freelance tech investigator Ten feels alive is when he cuts himself. For the last few years, he has taken freelance investigative jobs. Some of … END_OF_DOCUMENT_TOKEN_TO_BE_REPLACED

Coming January 29th to REELZChannel™! The DEADLY ASSOCIATES documentary! Step into Chicago during the 1960s and ‘70s, where mobsters influence everyone from strip-club owners to Teamsters, aldermen, judges, and local police. It is a world where … END_OF_DOCUMENT_TOKEN_TO_BE_REPLACED

"Lizzette Martinez’s story embodies the fire energy that gives light and life to survivors all around her! Survivors need to see strength and perseverance despite opposition, and Lizzette models just that." - Melissa Schuman, actress and singer In … END_OF_DOCUMENT_TOKEN_TO_BE_REPLACED

Soon To Be A Documentary Series! My name is Suzanne Buchanan. There is an active arrest warrant for me in Thailand for articles I published on "The Backpacker Murders" as the former owner and editor of the Samui Times. I am a British citizen … END_OF_DOCUMENT_TOKEN_TO_BE_REPLACED

In this true crime-flavored novel, Detective William Boyett is called out on Mardi Gras evening in Mobile, Alabama to investigate the discovery of a young woman’s body wrapped in a carpet in a vacant lot a few blocks from the parade route. Over … END_OF_DOCUMENT_TOKEN_TO_BE_REPLACED