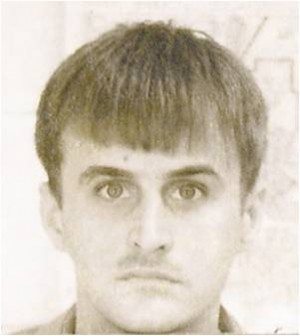 Editor’s Note: Katlyn Sweet is the daughter of Detective Gary Sweet, one of the main investigators whose quest to catch serial child-killer David Penton is the subject of BOGEYMAN: He Was Every Parent’s Nightmare. This post involves her father’s prison interview with Penton and her reaction to reading about it in the book.

Although detectives were 99 percent certain that Penton was the murderer of the young girls, he had no intention of admitting anything. Out of frustration and drive, Detective Sweet changed the direction of his questioning.

Without really knowing why he took the conversation in this direction, unless God was leading him, Sweet asked, “What do you think is going to happen to you after you die?”

Penton’s shrugged. “I’m right with God, so I’m not worried.”

I know my dad, and I know he has a strong walk with God. When I began reading this part of the book, I instantly got chills. I know my dad is great at his job and holds the key to getting a confession out of someone, but this is the first time I’d heard of him using his faith to do so.

He began by talking about how much he loved the biblical story of King David and Bathsheba. How David had lusted after Bathsheba, a married woman, to the point where he sent the woman’s husband into battle knowing he would die. Meanwhile back in Jerusalem, David, now a murderer, and Bathsheba committed adultery. And that God had punished the couple by causing their newborn son to die. But that David had repented and God had forgiven him, and called him a man after God’s own heart, even having committed such serious sins.

I have had many deep conversations with my dad about religion, biblical stories, and what’s right and wrong; in fact he is probably a huge part of the reason that I am the Christian I am today. Before even reading further, I knew he’d have something great to say to this Bogeyman.

As Sweet talked, Penton didn’t move. He just sat still, stared, and listened. Even the other detectives were quiet as Sweet spoke confidently and earnestly. “We know you killed these girls, but God will forgive you, and you can be a man after God’s own heart,” he said.

After I read the book, I went home to talk to my dad about this meeting with Penton. All he had to say about it was that he didn’t know why it came to him, “and quite frankly I am not real sure where the words that so steadily rolled off my tongue came from, I truly believe it was a God thing.”

Although he didn’t really believe it, Sweet told Penton that he believed that he was sincere in his beliefs. It was a hard thing to say because the detective could see right through him, but he wanted the killer to know that God could see through his lies, too.

I sincerely hope that Pentons declaration that he is “a man of God” is true. God forgives everyone if you simply admit, believe and confess that he is God and that you are a sinner. I think that the solution to any evil mind is a steady relationship with God.

Penton responded by declaring his innocence again. “I’m a man of God.”

My dad left knowing that he had done the right thing and taken it as far as he possibly could to get Penton to confess. He knew that he pleased God for sharing the love he has for all living things, no matter what they have done.

Two Great True Crime Books For The Price Of One! Filling Out The Form Also Enters You To Win One Of Four Signed Print Copies Of SMOOTH … END_OF_DOCUMENT_TOKEN_TO_BE_REPLACED

Date: August 7, 2014 Garland police detective Gary Sweet discusses on Dallas WFAA television how he got involved in the case that was the basis for … END_OF_DOCUMENT_TOKEN_TO_BE_REPLACED

It was a stimulating and inspirational day at our most recent salon in Cardiff-by- the-sea (or so I’m told). I was thrilled that a couple of repeat attendees said they … END_OF_DOCUMENT_TOKEN_TO_BE_REPLACED

Some Cases You Solve. Some Cases You Survive. Naval Criminal Investigative Service Special Agent, Tyrone Benhoff is in purgatory. That’s what agents call it when they find themselves on the wrong side of command and are transferred to a place … END_OF_DOCUMENT_TOKEN_TO_BE_REPLACED

New from award-winning author Terry Persun! After the murder of his wife and unborn child, the only time freelance tech investigator Ten feels alive is when he cuts himself. For the last few years, he has taken freelance investigative jobs. Some of … END_OF_DOCUMENT_TOKEN_TO_BE_REPLACED

Coming January 29th to REELZChannel™! The DEADLY ASSOCIATES documentary! Step into Chicago during the 1960s and ‘70s, where mobsters influence everyone from strip-club owners to Teamsters, aldermen, judges, and local police. It is a world where … END_OF_DOCUMENT_TOKEN_TO_BE_REPLACED

"Lizzette Martinez’s story embodies the fire energy that gives light and life to survivors all around her! Survivors need to see strength and perseverance despite opposition, and Lizzette models just that." - Melissa Schuman, actress and singer In … END_OF_DOCUMENT_TOKEN_TO_BE_REPLACED

Soon To Be A Documentary Series! My name is Suzanne Buchanan. There is an active arrest warrant for me in Thailand for articles I published on "The Backpacker Murders" as the former owner and editor of the Samui Times. I am a British citizen … END_OF_DOCUMENT_TOKEN_TO_BE_REPLACED

In this true crime-flavored novel, Detective William Boyett is called out on Mardi Gras evening in Mobile, Alabama to investigate the discovery of a young woman’s body wrapped in a carpet in a vacant lot a few blocks from the parade route. Over … END_OF_DOCUMENT_TOKEN_TO_BE_REPLACED