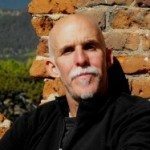 “He stands on the edge of a foul dark pond as the cold winds of hell howl around him. In his cruel hands, he holds a collection of shiny pebbles that represent every child he took, subjected to unspeakable horrors and pain, and then remorselessly killed in the most terrifying manner imaginable. With each murder, the monster, this bogeyman, this nightmare, tosses a pebble into the bottomless waters causing ripples of misery and devastation to spread outward, engulfing his victims, their families, friends, police officers, communities, and even, as these sorts of beyond- the-pale atrocities becomes public knowledge, the national consciousness. They erode how secure we feel in our homes, how safe our children are playing in the yard, whether evil is winning the battle …”–From the introduction to BOGEYMAN

As much as anything, BOGEYMAN delves into the “ripple effect” of violent crime, in this case the murder of children, on those who encounter the waves of grief, horror, fear and darkness. Far too often, in my opinion, true crime books focus on the criminal, as though he or she, is the anti-hero of a play and everyone else are but supporting actors. His or her exploits are recounted in grim detail, thousands of words are dedicated to his or her childhood, the psychology behind their actions, the courtroom battles between lawyers with the killer the center of attention. Far less is written about the deceased, or those other victims–the mothers, the siblings, the spouses and children–who act out their bit parts and then disappear into the wings. And the detectives play their roles as the unsentimental enforcers of justice, instead of men and women with their own families and emotional and psychological reactions to the horrors and grief they witness. BOGEYMAN attempted to show that side of law enforcement. But there is one more group impacted by violent crime, and that is all the rest of us. In this age of the internet and 24/7 television and reality crime shows, we are inundated with it, force fed the notion that we are small islands surrounded by an ocean of evil. We tell each other that “the world is different than when we were children” and ask “What is wrong with people?” We live in fear; look at all strangers with distrust; hover over our children like mother bears, until they, too, absorb our fears and the world becomes a dark, forbidding place full of danger and monsters. Yet, in reality for all of its ills and the twenty-four hour newsfeed that tries to convince us otherwise, it is still a big, beautiful world full of mostly good, well-intentioned people. Yes, there are monsters, but now as well as in the past, they are few and there are those who hunt them. We win this battle over evil by holding onto our values, using common sense when it comes to looking out for ourselves and our loved ones; and refusing to let monsters dictate how we live.

Two Great True Crime Books For The Price Of One! Filling Out The Form Also Enters You To Win One Of Four Signed Print Copies Of SMOOTH … END_OF_DOCUMENT_TOKEN_TO_BE_REPLACED

Date: August 7, 2014 Garland police detective Gary Sweet discusses on Dallas WFAA television how he got involved in the case that was the basis for … END_OF_DOCUMENT_TOKEN_TO_BE_REPLACED

It was a stimulating and inspirational day at our most recent salon in Cardiff-by- the-sea (or so I’m told). I was thrilled that a couple of repeat attendees said they … END_OF_DOCUMENT_TOKEN_TO_BE_REPLACED

Due to Sullivan’s extensive writing about Ted Bundy (which has produced six books), he’s become a sort of magnet over the years, drawing out many people who were part of the Bundy story, but have otherwise kept a low profile over the decades; and … END_OF_DOCUMENT_TOKEN_TO_BE_REPLACED

Volume One The Early Years In 1944 Brooklyn, newborn Michael J. Hardy is rejected by his mother so she can run with gangster Bugsy Siegel, Hardy’s godfather. Shirley Rook rose to the top of the criminal ranks. As the Queen of New York City … END_OF_DOCUMENT_TOKEN_TO_BE_REPLACED

This is the true story of Carmine Imbriale – a gambler, a brawler, a bandit, a bookie, an enforcer. For two decades, Imbriale was a street-level operative in one of the most violent crews in the Colombo Family, and he endeared himself to some of the … END_OF_DOCUMENT_TOKEN_TO_BE_REPLACED

Ten must track down and stop rogue scientists behind the development of criminal technology in THE HUMANZEEE EXPERIMENTS, the next installment of The 'Ten' Mystery Series! The International Security for Technological Innovations, a federal … END_OF_DOCUMENT_TOKEN_TO_BE_REPLACED

It was a dreary winter afternoon in Ayer, Massachusetts, a quintessential New England town, the type which is romanticized in Robert Frost's poems. But on January 30, 1979, a woman’s scream was heard piercing the northeast tempest wind. In an … END_OF_DOCUMENT_TOKEN_TO_BE_REPLACED