Can you have a murder case without a body?

Early the morning of Wednesday, Dec. 18, 2013, Heather Elvis, a pretty 20-year-old hostess at the Myrtle Beach theme restaurant Tilted Kilt, drove out to a remote boat launch ramp along the Intracoastal Waterway and was never heard from again.

After months of investigation, police arrived in force at the home of Sidney and Tammy Moorer and arrested the married couple with three children for investigation of murdering Heather. The motive stemmed from the fact that Sidney, a maintenance worker at the restaurant, had a sexual relationship with Heather in the fall of 2013. Later evidence suggested that Heather may have been pregnant with Sidney’s child.

As I show in my new book “Missing … And Presumed Dead,” prosecutors could prove through phone and GPS records and other evidence that Sidney spoke to Heather from a payphone just hours before she disappeared, leaving her upset, on a night when Sidney and Tammy were driving around Myrtle Beach in their pickup.

Surveillance video recorded images of a pickup that authorities would argue belonged to the Moorers driving to and from the boat landing around the time Heather went missing. And prosecutors had Sidney’s police interview in which he initially lied when he denied telephoning Heather that night.

The problem: There was no Heather Elvis.

Prosecutors had no idea what happened to her or where her body may have ended up. They didn’t even have a crime scene. Heather’s car was found at the landing, but there was no evidence of a struggle, no blood or hair or DNA. More important, authorities had no physical evidence linking either of the Moorers to the car. Their own truck had been scrubbed clean and police didn’t even bother look for DNA.

A common legal axiom used to be: no body, no crime. In researching my book, I spoke to an expert on the subject, Thomas A. “Tad” DiBiase, former federal prosecutor who has written the leading text, “No-Body Homicide Cases: A Practical Guide to Investigating, Prosecuting, and Winning Cases When the Victim Is Missing.”

For years the no body, no crime rule proved mostly true. Tracking cases dating back to the 1830s, DiBiase found only 525 of them that had gone to trial. But then then he discovered something interesting. More than half of those cases were tried in the last 19 years. What had changed?

DiBiase credits new technology. Advancements in DNA can now place a victim, and often a suspect, at a crime scene in ways never possible before. Except in the Heather Elvis case there was no evidence of a crime scene. So prosecutors used another new common tack, arguing Heather had to be dead because she stopped using her cellphone and social media. Heather was a frequent poster on Twitter, Facebook and Instagram and spoke on her cell phone constantly. That all changed the night she disappeared.

Prosecutors were prepared to argue that a digital flat line was tantamount to death.

But would the jury buy it? Or would the extensive search for Heather’s body render the problem moot? Read “Missing … And Presumed Dead” to follow the legal twists and turns that paralleled the grueling emotional roller coaster endured by Heather’s family as authorities seek justice in a dark void.

It's the holidays again! You're probably searching for and picking out the perfect present for everyone on your list. Consider this your reminder to treat yourself to something nice this holiday season, like free audiobooks with our Holiday Audiobook … END_OF_DOCUMENT_TOKEN_TO_BE_REPLACED

It's always a good day for free audiobooks! That's right! Free audiobooks! Just a gift from us to you, our readers.   Browse by genre and select the cover to get more information and your free copy! Non-Fiction True Crime Business … END_OF_DOCUMENT_TOKEN_TO_BE_REPLACED

We know how hard 2020 has been. To help you end the year on a better note, we wanted to give you the gift of free audiobooks! Hence, the Holiday 2020 Audiobook Giveaway! You're probably thinking of gifts for others right now, like we always do during … END_OF_DOCUMENT_TOKEN_TO_BE_REPLACED

Can you have a murder case without a body? Early the morning of Wednesday, Dec. 18, 2013, Heather Elvis, a pretty 20-year-old hostess at the Myrtle Beach theme restaurant Tilted Kilt, drove out to a remote boat launch ramp along the Intracoastal … END_OF_DOCUMENT_TOKEN_TO_BE_REPLACED

On a cold Southern night in 2013 under a full moon, 20-year-old Heather Elvis parked her car at a boat ramp along the Intracoastal Waterway and was never seen again.  The disappearance of the beautiful, vivacious hostess at a … END_OF_DOCUMENT_TOKEN_TO_BE_REPLACED 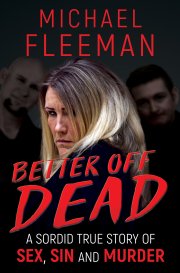 A frustrated, unhappy wife. Her much younger, attentive lover. A husband who degrades and ignores her. The stage is set for a love-triangle murder that shatters family illusions and lays bare a quiet family community's secret world of sex, sin and … END_OF_DOCUMENT_TOKEN_TO_BE_REPLACED

Soon To Be A Documentary Series! My name is Suzanne Buchanan. There is an active arrest warrant for me in Thailand for articles I published on "The Backpacker Murders" as the former owner and editor of the Samui Times. I am a British citizen … END_OF_DOCUMENT_TOKEN_TO_BE_REPLACED

Coming January 29th to REELZChannel™! The DEADLY ASSOCIATES documentary! Step into Chicago during the 1960s and ‘70s, where mobsters influence everyone from strip-club owners to Teamsters, aldermen, judges, and local police. It is a world where … END_OF_DOCUMENT_TOKEN_TO_BE_REPLACED

"Lizzette Martinez’s story embodies the fire energy that gives light and life to survivors all around her! Survivors need to see strength and perseverance despite opposition, and Lizzette models just that." - Melissa Schuman, actress and singer In … END_OF_DOCUMENT_TOKEN_TO_BE_REPLACED

Step inside the death chamber and behind the walls of Ohio’s death row. Bill Kimberlin, Psy.D, invites the reader on an extensive and unbiased journey inside Ohio’s death row in WATCH ME DIE: Last Words From Death Row. You will see how these … END_OF_DOCUMENT_TOKEN_TO_BE_REPLACED

"The wheels of justice turn slowly, but grind exceedingly fine." Renee Fehr knew that Gregory Houser killed her sister Sheryl. There was not a single doubt in her mind. Yet for 27 years Houser walked free. But Renee wouldn’t rest … END_OF_DOCUMENT_TOKEN_TO_BE_REPLACED

On the early morning of March 6, 1993, an intense fire broke out in a tiny nursery. Sixteen minutes later, firefighters had extinguished the blaze, only to reveal a room burned so severely, everything was virtually unrecognizable. Then, they were … END_OF_DOCUMENT_TOKEN_TO_BE_REPLACED

During the early morning hours of July 17, 1983, fatigue became a factor for the young couple from central Illinois who spent their day under the hot sun at Marriott’s Great America amusement park north of Chicago. On their drive home, the tired … END_OF_DOCUMENT_TOKEN_TO_BE_REPLACED

Some Cases You Solve. Some Cases You Survive. Naval Criminal Investigative Service Special Agent, Tyrone Benhoff is in purgatory. That’s what agents call it when they find themselves on the wrong side of command and are transferred to a place … END_OF_DOCUMENT_TOKEN_TO_BE_REPLACED

New from award-winning author Terry Persun! After the murder of his wife and unborn child, the only time freelance tech investigator Ten feels alive is when he cuts himself. For the last few years, he has taken freelance investigative jobs. Some of … END_OF_DOCUMENT_TOKEN_TO_BE_REPLACED

Coming January 29th to REELZChannel™! The DEADLY ASSOCIATES documentary! Step into Chicago during the 1960s and ‘70s, where mobsters influence everyone from strip-club owners to Teamsters, aldermen, judges, and local police. It is a world where … END_OF_DOCUMENT_TOKEN_TO_BE_REPLACED

"Lizzette Martinez’s story embodies the fire energy that gives light and life to survivors all around her! Survivors need to see strength and perseverance despite opposition, and Lizzette models just that." - Melissa Schuman, actress and singer In … END_OF_DOCUMENT_TOKEN_TO_BE_REPLACED

Soon To Be A Documentary Series! My name is Suzanne Buchanan. There is an active arrest warrant for me in Thailand for articles I published on "The Backpacker Murders" as the former owner and editor of the Samui Times. I am a British citizen … END_OF_DOCUMENT_TOKEN_TO_BE_REPLACED

In this true crime-flavored novel, Detective William Boyett is called out on Mardi Gras evening in Mobile, Alabama to investigate the discovery of a young woman’s body wrapped in a carpet in a vacant lot a few blocks from the parade route. Over … END_OF_DOCUMENT_TOKEN_TO_BE_REPLACED