Les Abend offers his opinion and explanation of the United flight 328 incident on Saturday, February 20, 2021. Abend is a retired American Airlines pilot, writer for Flying Magazine, and CNN aviation analyst. He is also the author of PAPER WINGS, an aviation thriller. 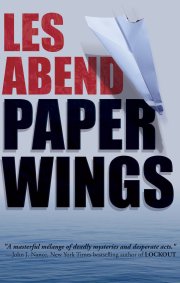 His article, "Pilot: What happens in an emergency like United 328" is available in part below and in full on cnn.com.

"For those who haven't had the opportunity to follow this past weekend's dramatic story, United Flight 328, a Boeing 777-200, departed Denver Airport bound for Honolulu at 1:04 p.m. local time. A few minutes into the trip, the airplane experienced what we call in the business a catastrophic engine failure. The event also qualified as an uncontained engine failure because various pieces of the engine scattered debris onto a nearby suburb. The covering of the engine, similar in function to the hood of a car and known as the cowling, completely separated from the engine...

But what was happening in the cockpit of United 328? Judging by the external condition of the engine, and the fact that at least one fan blade appears to be missing, the airplane was most likely subjected to a pronounced jolt -- one that the crew and passengers felt. Once the cowling completely separated from the engine, the normal aerodynamic flow became disrupted, causing the airplane to buffet...

But please don't condemn all B-777s. Many of them do not have the PW4000 engine installed -- and United is grounding those that do. After nine years of flying the airplane, I wouldn't hesitate to get on one."

You can learn more or purchase PAPER WINGS, available from WildBlue Press.

Les Abend offers his opinion and explanation of the United flight 328 incident on Saturday, February 20, 2021. Abend is a retired American Airlines pilot, writer for Flying Magazine, and CNN aviation analyst. He is also the author of PAPER WINGS, an … END_OF_DOCUMENT_TOKEN_TO_BE_REPLACED

It's always a good day for free audiobooks! That's right! Free audiobooks! Just a gift from us to you, our readers.   Browse by genre and select the cover to get more information and your free copy! Non-Fiction True Crime Business … END_OF_DOCUMENT_TOKEN_TO_BE_REPLACED

We know how hard 2020 has been. To help you end the year on a better note, we wanted to give you the gift of free audiobooks! Hence, the Holiday 2020 Audiobook Giveaway! You're probably thinking of gifts for others right now, like we always do during … END_OF_DOCUMENT_TOKEN_TO_BE_REPLACED

Even though Mom would like me to sing my own praises, it’s not my style. But I’m often asked about the opportunities I’ve been fortunate enough to be afforded. Here’s one of my scripted responses for “How did you get that gig?” Answer: “I am grateful … END_OF_DOCUMENT_TOKEN_TO_BE_REPLACED

The old adage of, “Write about what you know,” is certainly applicable to “Paper Wings.” But beyond the story itself, the adage is also applicable to the characters. As is true for most, life experience dictates our perception of people and their … END_OF_DOCUMENT_TOKEN_TO_BE_REPLACED

Due to Sullivan’s extensive writing about Ted Bundy (which has produced six books), he’s become a sort of magnet over the years, drawing out many people who were part of the Bundy story, but have otherwise kept a low profile over the decades; and … END_OF_DOCUMENT_TOKEN_TO_BE_REPLACED

Volume One The Early Years In 1944 Brooklyn, newborn Michael J. Hardy is rejected by his mother so she can run with gangster Bugsy Siegel, Hardy’s godfather. Shirley Rook rose to the top of the criminal ranks. As the Queen of New York City … END_OF_DOCUMENT_TOKEN_TO_BE_REPLACED

This is the true story of Carmine Imbriale – a gambler, a brawler, a bandit, a bookie, an enforcer. For two decades, Imbriale was a street-level operative in one of the most violent crews in the Colombo Family, and he endeared himself to some of the … END_OF_DOCUMENT_TOKEN_TO_BE_REPLACED

Ten must track down and stop rogue scientists behind the development of criminal technology in THE HUMANZEEE EXPERIMENTS, the next installment of The 'Ten' Mystery Series! The International Security for Technological Innovations, a federal … END_OF_DOCUMENT_TOKEN_TO_BE_REPLACED

It was a dreary winter afternoon in Ayer, Massachusetts, a quintessential New England town, the type which is romanticized in Robert Frost's poems. But on January 30, 1979, a woman’s scream was heard piercing the northeast tempest wind. In an … END_OF_DOCUMENT_TOKEN_TO_BE_REPLACED