Every crime writer has heard this little heckling voice, usually from the cheap seats, but sometimes from inside his own head. It isn’t always loud, but it’s often piercing.

My 2008 true crime, The Darkest Night, recently enjoyed a revival on bestseller lists when its long-awaited digital edition was released a couple weeks ago. It’s an intimate story of a monstrous crime against two of my childhood friends in the small town where we grew up and I wanted to explore the reverberation of one terrible act across time. It has struck a chord with American readers for more than six years … and it has also apparently struck at least one nerve

“Someone profiting from this tragedy is inexcusable!” a fellow named Eric posted a couple days ago. He admitted he hasn’t (and probably wouldn’t) read The Darkest Night but swiftly deemed it greedy, exploitive, and parasitic.

Eff’in money grubbers! I beg you to use part of the profits to support something good for children! Back ‘Amber Alerts,’ donate to build a safe playground for disabled children, but do it yourself! Don’t just write a check and call it good! And I hope you carry the guilt that the money is coming from the loss of two, yes two, innocent lives lost!”

Crime writers have heard this discordant grousing since Truman Capote wrote about the slaughter of an innocent farm family in In Cold Blood. Vincent Bugliosi heard it after Helter Skelter graphically exposed Manson as a bogeyman for the ages. Ann Rule has heard it after every #1 New York Times bestseller she’s written. Why should these ink-stained wretches make a dime off tragedy?

It reflects our sense of justice: Victims should profit. Not killers, not cops, not authors or filmmakers, not newspapers or TV stations. Only victims, once and future.

Eric’s discomfort is a common challenge for crime writers. A lot of people like Eric (including me) think a story should improve society, starting with the innocent victims of a crime. We simply disagree about the power of storytelling to improve society (and we likely have vastly different ideas of just how much an author profits from a book).

Journalists tell stories, good and bad. Authors enlarge the experience of a society. They have a sense of justice, too, or they probably wouldn’t be telling these stories. And I must admit that there are a few—a very few—writers and publishers who exploit human tragedy purely for personal gain. But I wouldn’t write crime stories if I thought they couldn’t change us for the better.

The alternative is that such tragedies are never committed to the culture’s memory in a book, story, or movie. If not for books like The Darkest Night, the memories of these victims would be lost or confined to only a small community. A powerful story is shared by everyone.

The stories we have retold through time haven’t always ended well, but it’s the endings that always decide whether a story is worth retelling—even a sordid, sad crime story in which all the wrong people die. 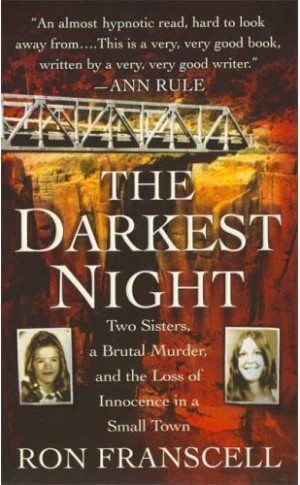 The Darkest Night, A True Crime

So the best thing I could do for the victims in this case was share the story so more people know them, and more people are energized to prevent it from ever happening again. To kick-start that energy, I donated every dollar of The Darkest Night’s first-day sales to local national chapters of Parents of Murdered Children in the names of my two childhood friends and next-door neighbors, Amy Burridge and Becky Thomson. But that, too, was merely to soothe the heckler in my own heart, who reminded me that this might never have been my story anyway. I just told it.

Nevertheless, a lot of people do jobs that are distasteful, either for the greater good or because we don’t want to do them ourselves. Should a gravedigger or florist work free just because death has created a need for his labor? Should a surgeon work for free because someone will die if he doesn’t?

Conversely, some people get paid for work that is, at its heart, good, altruistic, and humanitarian. Should teachers, cops, firefighters, pastors, and nurses work for free simply because nobody should profit from good deeds?

Whatever money an author (or newspaper or filmmaker) earns merely makes it possible to continue telling stories. If they are valuable to us, more can be written. If they exploit or erode our culture, I like to think they’ll die out (but reality TV tells me I might be wrong).

I believe deeply in the power of a story to improve society. I believe artists of all kinds are undervalued in our culture, which too often believes an artist’s contributions should be freely given. And I think the way we enhance our existence is through stories, so we mustn’t make it impossible for storytellers to sustain themselves.

WildBlue Press is proud to have published the newest edition of Ron Franscell‘s debut crime fiction, THE DEADLINE. In coming weeks, WBP will also publish its sequel, THE OBITUARY.

A sunset cruise through a place where ordinary inhumanities are entertainment... Los Angeles is where America’s dreams and nightmares got all tangled up. In this otherworldly place of seemingly everlasting life, death could have an otherworldly … END_OF_DOCUMENT_TOKEN_TO_BE_REPLACED

"The ultimate guilty pleasure book!" - San Antonio Express News The line between history and mythology is razor thin—and the American Southwest often erases the line altogether. We might never disentangle crime-fact from fiction, but this book will … END_OF_DOCUMENT_TOKEN_TO_BE_REPLACED

The Adventures of Newspaperman Jefferson Morgan Continue With Another Scintillating Mystery Set In Wyoming When a world-renowned forensic anthropologist journeys to Winchester, Wyoming, to examine the long-dead remains of a woman who claimed to … END_OF_DOCUMENT_TOKEN_TO_BE_REPLACED

A dying convict's last request thrusts small-town newspaperman Jefferson Morgan into a deadly maelstrom as he explores a fifty-year-old case of child murder -- a wound his town still isn't ready to scrape open. Under the heaviest deadline of his … END_OF_DOCUMENT_TOKEN_TO_BE_REPLACED

Some Cases You Solve. Some Cases You Survive. Naval Criminal Investigative Service Special Agent, Tyrone Benhoff is in purgatory. That’s what agents call it when they find themselves on the wrong side of command and are transferred to a place … END_OF_DOCUMENT_TOKEN_TO_BE_REPLACED

New from award-winning author Terry Persun! After the murder of his wife and unborn child, the only time freelance tech investigator Ten feels alive is when he cuts himself. For the last few years, he has taken freelance investigative jobs. Some of … END_OF_DOCUMENT_TOKEN_TO_BE_REPLACED

Coming January 29th to REELZChannel™! The DEADLY ASSOCIATES documentary! Step into Chicago during the 1960s and ‘70s, where mobsters influence everyone from strip-club owners to Teamsters, aldermen, judges, and local police. It is a world where … END_OF_DOCUMENT_TOKEN_TO_BE_REPLACED

"Lizzette Martinez’s story embodies the fire energy that gives light and life to survivors all around her! Survivors need to see strength and perseverance despite opposition, and Lizzette models just that." - Melissa Schuman, actress and singer In … END_OF_DOCUMENT_TOKEN_TO_BE_REPLACED

Soon To Be A Documentary Series! My name is Suzanne Buchanan. There is an active arrest warrant for me in Thailand for articles I published on "The Backpacker Murders" as the former owner and editor of the Samui Times. I am a British citizen and had … END_OF_DOCUMENT_TOKEN_TO_BE_REPLACED

In this true crime-flavored novel, Detective William Boyett is called out on Mardi Gras evening in Mobile, Alabama to investigate the discovery of a young woman’s body wrapped in a carpet in a vacant lot a few blocks from the parade route. Over … END_OF_DOCUMENT_TOKEN_TO_BE_REPLACED