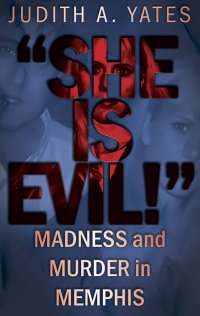 SHE IS EVIL! is now available from WildBlue Press! Order your copy today!

When I write a true crime book I include a lesson to the story; I hope the reader is educated on an important topic when reading my books. This is why I elected to write, “She is Evil!” Madness and Murder in Memphis, a story of domestic violence leading to murder.

Ejaz Ahmad’s terrible death at the hands of Leah Joy Ward is a story of trust, abuse, religion, and crime: how unrest leads to crime. Of a kind man who tried to help a troubled woman and became the victim of abuse and, eventually, a heinous murder.

Spousal abuse with the female being the perpetrator and the man being the victim is so rare that it is impossible to obtain the statistics. It does exist; possible the man is afraid to report the abuse because it would make him look “wimpy,” or he does not realize it is illegal. He does not want to disrupt the family: have her arrested, the kids taken away, or to cause trouble in their house, workplace, or social circle. Ejaz Ahmad was certainly abused by Leah Ward. She hit him, screamed at him, and committed emotional abuse. It resulted in his death and mutilation of his corpse in April 2003. 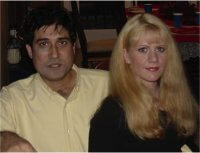 Despite her abuse, Ejaz Ahmad stated with LeahWard. It would result in his murder.

I have taught domestic violence education and prevention programs for over 25 years. It was my focal point of study in undergraduate school and I have attended numerous workshops, volunteer’s events, and classes across the United States. Like most of you reading this, domestic violence touched my family, who had said, “It won’t happen to us.” In order to stay sane and not take action against the perpetrator, I educated myself: the red flags of an abusive relationship, the dynamics, and the issues.

Ejaz and Leah’s relationship had all of the red flags of an abusive relationship, the dynamics, and the issues. Leah had a history of violence and grew up in a violent environment. She was a drug abuser. She moved into his home and they married soon after they met. Ejaz kept telling himself it would get better. His family and friends warned him to get away from her. New to the United States and confronted with domestic violence, Ejaz had no idea Leah’s abusive behavior was illegal. When he finally sent her away, it was too late. She returned to his home and killed him. It is a typical tale of domestic violence.

Lowell Cauffiel is a true crime author I admire, and he once told me, “A story has to have a story behind it. True crime needs a lesson or an issue in the ‘background’ that is woven into the crime to teach readers.” It is my hope that in telling the story of Ejaz and Leah readers will understand domestic violence. If they see those red flags in their own relationships they will get out of it safely. I included a reference chapter on the red flags of an abusive relationship, the dynamics, the issues, and where to go for help. If Ejaz’s death can help someone else escape violence and death, then something positive has come out of tragedy.

SHE IS EVIL by Judith A. Yates

Buy SHE IS EVIL now:

More From Judith A. Yates

It's the holidays again! You're probably searching for and picking out the perfect present for everyone on your list. Consider this your reminder to treat yourself to something nice this holiday season, like free audiobooks with our Holiday Audiobook … END_OF_DOCUMENT_TOKEN_TO_BE_REPLACED

It's always a good day for free audiobooks! That's right! Free audiobooks! Just a gift from us to you, our readers.   Browse by genre and select the cover to get more information and your free copy! Non-Fiction True Crime Business … END_OF_DOCUMENT_TOKEN_TO_BE_REPLACED

We know how hard 2020 has been. To help you end the year on a better note, we wanted to give you the gift of free audiobooks! Hence, the Holiday 2020 Audiobook Giveaway! You're probably thinking of gifts for others right now, like we always do during … END_OF_DOCUMENT_TOKEN_TO_BE_REPLACED

In 2018, WildBlue Press released 29 new titles! Among those titles, twenty-one were under the true crime genre, four were thrillers, two mysteries, and one business book as well as one fantasy book. From winning awards to being featured on … END_OF_DOCUMENT_TOKEN_TO_BE_REPLACED 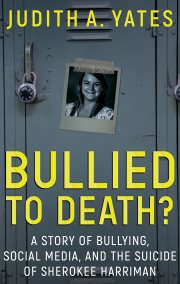 Do you think I’m pretty. No one likes me. I hate my life. I wish I had a friend. It was the mantra of fourteen-year-old Sherokee Harriman, who in September 2015 faced her alleged bullies in a small Tennessee public park and pulled out a … END_OF_DOCUMENT_TOKEN_TO_BE_REPLACED

Soon To Be A Documentary Series! My name is Suzanne Buchanan. There is an active arrest warrant for me in Thailand for articles I published on "The Backpacker Murders" as the former owner and editor of the Samui Times. I am a British citizen and had … END_OF_DOCUMENT_TOKEN_TO_BE_REPLACED

Coming January 29th to REELZChannel™! The DEADLY ASSOCIATES documentary! Step into Chicago during the 1960s and ‘70s, where mobsters influence everyone from strip-club owners to Teamsters, aldermen, judges, and local police. It is a world where … END_OF_DOCUMENT_TOKEN_TO_BE_REPLACED

"Lizzette Martinez’s story embodies the fire energy that gives light and life to survivors all around her! Survivors need to see strength and perseverance despite opposition, and Lizzette models just that." - Melissa Schuman, actress and singer In … END_OF_DOCUMENT_TOKEN_TO_BE_REPLACED

Step inside the death chamber and behind the walls of Ohio’s death row. Bill Kimberlin, Psy.D, invites the reader on an extensive and unbiased journey inside Ohio’s death row in WATCH ME DIE: Last Words From Death Row. You will see how these … END_OF_DOCUMENT_TOKEN_TO_BE_REPLACED

"The wheels of justice turn slowly, but grind exceedingly fine." Renee Fehr knew that Gregory Houser killed her sister Sheryl. There was not a single doubt in her mind. Yet for 27 years Houser walked free. But Renee wouldn’t rest … END_OF_DOCUMENT_TOKEN_TO_BE_REPLACED

On the early morning of March 6, 1993, an intense fire broke out in a tiny nursery. Sixteen minutes later, firefighters had extinguished the blaze, only to reveal a room burned so severely, everything was virtually unrecognizable. Then, they were … END_OF_DOCUMENT_TOKEN_TO_BE_REPLACED

During the early morning hours of July 17, 1983, fatigue became a factor for the young couple from central Illinois who spent their day under the hot sun at Marriott’s Great America amusement park north of Chicago. On their drive home, the tired … END_OF_DOCUMENT_TOKEN_TO_BE_REPLACED

Some Cases You Solve. Some Cases You Survive. Naval Criminal Investigative Service Special Agent, Tyrone Benhoff is in purgatory. That’s what agents call it when they find themselves on the wrong side of command and are transferred to a place … END_OF_DOCUMENT_TOKEN_TO_BE_REPLACED

New from award-winning author Terry Persun! After the murder of his wife and unborn child, the only time freelance tech investigator Ten feels alive is when he cuts himself. For the last few years, he has taken freelance investigative jobs. Some of … END_OF_DOCUMENT_TOKEN_TO_BE_REPLACED

Coming January 29th to REELZChannel™! The DEADLY ASSOCIATES documentary! Step into Chicago during the 1960s and ‘70s, where mobsters influence everyone from strip-club owners to Teamsters, aldermen, judges, and local police. It is a world where … END_OF_DOCUMENT_TOKEN_TO_BE_REPLACED

"Lizzette Martinez’s story embodies the fire energy that gives light and life to survivors all around her! Survivors need to see strength and perseverance despite opposition, and Lizzette models just that." - Melissa Schuman, actress and singer In … END_OF_DOCUMENT_TOKEN_TO_BE_REPLACED

Soon To Be A Documentary Series! My name is Suzanne Buchanan. There is an active arrest warrant for me in Thailand for articles I published on "The Backpacker Murders" as the former owner and editor of the Samui Times. I am a British citizen and had … END_OF_DOCUMENT_TOKEN_TO_BE_REPLACED

In this true crime-flavored novel, Detective William Boyett is called out on Mardi Gras evening in Mobile, Alabama to investigate the discovery of a young woman’s body wrapped in a carpet in a vacant lot a few blocks from the parade route. Over … END_OF_DOCUMENT_TOKEN_TO_BE_REPLACED