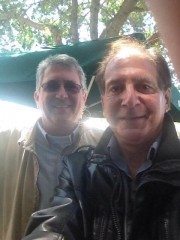 See that headline? Well, it’s not just some silly rumor — it’s a promise! Award-winning journalist and world-renowned true crime commentator Frank C. Girardot and I have been having fun cranking out a few mini-true crime features as tie ins to DEADLY SINS — to mixed reviews — but we were testing our ability to merge our styles and attitudes as warm ups to giving you a full length NEW TRUE CRIME BOOK of murder and mayhem.

Frank and I found the story — the bizarre death of a beloved Los Angeles educator (also named Frank) with a special gift of reaching and uplifting troubled and disadvantaged youth. Allegations and suspicions of “WHO MURDERED FRANK” were rampant, and his widow was badgering police to bring an alleged vengeful pedophile to justice — a perverse character who was out to repay Frank for the humiliation of having his sexual indiscretions revealed. The biggest challenge was something that coroners usually figure out within 24 hours — no one could determine the cause of death because of one simple fact: Frank was in perfect physical health — too healthy to be dead!

The medical examiner was stumped — no matter how many tests, no matter how intensive the autopsy and repeated lab work, this man’s only health issue was death! It took two crafty L.A. County Detectives, a relentless widow, and a strangely cooperative primary suspect to reveal a twisted plot of deception, trickery, lies, fraud and intentionally misleading clues and “evidence” that would, in the process, reveal an alleged SECOND murder more disturbing and shocking than anything these seasoned crime fighters have ever encountered.

To tell more would require spoiler alerts, but stay tuned as we are working like mad men to give you a slick combination murder mystery and true crime expose that will keep you turning the pages until your jaw drops in disbelief at one of the most shocking allegations in the history of contemporary true crime!

While you wait, you can amuse yourself with a heck of a crime romp with MAN OVERBOARD: The Counterfeit Resurrection of Phil Champagne, which was republished by WildBlue Press for its 20th Anniversary.

And, YES, I am still working on the climax of THE SIGN OF THE SAINT — a new full length Simon Templar novel. It has been delayed due to other projects intervening, but I promise it is ALMOST READY for submission to the Estate for their approval or pre-approval suggestions.

Some Cases You Solve. Some Cases You Survive. Naval Criminal Investigative Service Special Agent, Tyrone Benhoff is in purgatory. That’s what agents call it when they find themselves on the wrong side of command and are transferred to a place … END_OF_DOCUMENT_TOKEN_TO_BE_REPLACED

New from award-winning author Terry Persun! After the murder of his wife and unborn child, the only time freelance tech investigator Ten feels alive is when he cuts himself. For the last few years, he has taken freelance investigative jobs. Some of … END_OF_DOCUMENT_TOKEN_TO_BE_REPLACED

Coming January 29th to REELZChannel™! The DEADLY ASSOCIATES documentary! Step into Chicago during the 1960s and ‘70s, where mobsters influence everyone from strip-club owners to Teamsters, aldermen, judges, and local police. It is a world where … END_OF_DOCUMENT_TOKEN_TO_BE_REPLACED

"Lizzette Martinez’s story embodies the fire energy that gives light and life to survivors all around her! Survivors need to see strength and perseverance despite opposition, and Lizzette models just that." - Melissa Schuman, actress and singer In … END_OF_DOCUMENT_TOKEN_TO_BE_REPLACED

Soon To Be A Documentary Series! My name is Suzanne Buchanan. There is an active arrest warrant for me in Thailand for articles I published on "The Backpacker Murders" as the former owner and editor of the Samui Times. I am a British citizen and had … END_OF_DOCUMENT_TOKEN_TO_BE_REPLACED

In this true crime-flavored novel, Detective William Boyett is called out on Mardi Gras evening in Mobile, Alabama to investigate the discovery of a young woman’s body wrapped in a carpet in a vacant lot a few blocks from the parade route. Over … END_OF_DOCUMENT_TOKEN_TO_BE_REPLACED