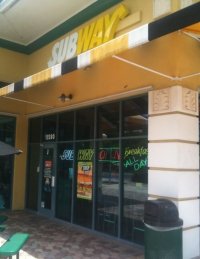 John Roland, 49, died in surgery after a shooting in West Palm Beach. Police deputies were dispatched to a disturbance in the 4600 block of Myla Lane, but just before arriving at the scene, dispatch received a 911 call from a nearby Subway restaurant regarding a shooting victim entering the restaurant. Palm Beach County Fire Rescue transported the victim to a local hospital for treatment, but he died in surgery a little while later.

A gunshot victim in his late twenties walked into Bamboo Restaurant in Palms, CA back in 2015 asking for help. The Bamboo is known for serving Latin-fusion cuisine. The employees called 911 when they realized the man had been shot in the abdomen. Paramedics transported the man to an a nearby hospital. His condition remains unknown.

A man who was shot in the parking lot of a KFC restaurant in Durham, NC back in 2013 returned the next day to thank the employees who called 911. Employees say the shooting victim fell to the floor saying he had been shot in the leg and that his wound was burning. He claimed the shooting was a misunderstanding between friends.

A bleeding man stumbled into a Denny’s restaurant asking for help moments after a shooting in San Pablo, CA back in 2015. A surveillance camera captured two people walking into the restaurant after one had been shot. The uninjured man then abandoned the shooting victim, who begged him, “Can you please don’t go?” and, “Call my baby mana at least,” but the uninjured man said “No, I have to go,” and he ran away.

If you’d like to read a story about another Palm Beach murder, check out author, Denise Wallace, and her true crime book, Daddy’s Little Secret.

Some Cases You Solve. Some Cases You Survive. Naval Criminal Investigative Service Special Agent, Tyrone Benhoff is in purgatory. That’s what agents call it when they find themselves on the wrong side of command and are transferred to a place … END_OF_DOCUMENT_TOKEN_TO_BE_REPLACED

New from award-winning author Terry Persun! After the murder of his wife and unborn child, the only time freelance tech investigator Ten feels alive is when he cuts himself. For the last few years, he has taken freelance investigative jobs. Some of … END_OF_DOCUMENT_TOKEN_TO_BE_REPLACED

Coming January 29th to REELZChannel™! The DEADLY ASSOCIATES documentary! Step into Chicago during the 1960s and ‘70s, where mobsters influence everyone from strip-club owners to Teamsters, aldermen, judges, and local police. It is a world where … END_OF_DOCUMENT_TOKEN_TO_BE_REPLACED

"Lizzette Martinez’s story embodies the fire energy that gives light and life to survivors all around her! Survivors need to see strength and perseverance despite opposition, and Lizzette models just that." - Melissa Schuman, actress and singer In … END_OF_DOCUMENT_TOKEN_TO_BE_REPLACED

Soon To Be A Documentary Series! My name is Suzanne Buchanan. There is an active arrest warrant for me in Thailand for articles I published on "The Backpacker Murders" as the former owner and editor of the Samui Times. I am a British citizen and had … END_OF_DOCUMENT_TOKEN_TO_BE_REPLACED

In this true crime-flavored novel, Detective William Boyett is called out on Mardi Gras evening in Mobile, Alabama to investigate the discovery of a young woman’s body wrapped in a carpet in a vacant lot a few blocks from the parade route. Over … END_OF_DOCUMENT_TOKEN_TO_BE_REPLACED